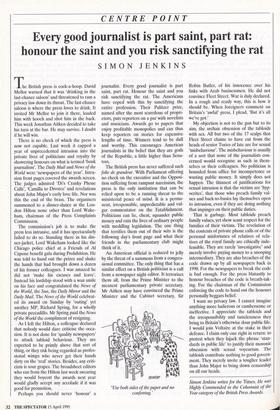 Every good journalist is part saint, part rat: honour the saint and you risk sanctifying the rat

SI MON JENKINS he British press is cock-a-hoop. David Mellor warned that it was 'drinking in the last-chance saloon' and threatened to ram a privacy law down its throat. The last-chance saloon is where the press loves to drink. It invited Mr Mellor to join it there, loaded him with hooch and shot him in the back. This week Jonathan Aitken decided to take his turn at the bar. He may survive. I doubt if he will win.

There is no cheek of which the press is now not capable. Last week it capped a year of unprecedented intrusion into the private lives of politicians and royalty by showering honours on what is termed 'boa journalism'. The Daily Mail and News of the World were 'newspapers of the year'. Intru- sion front pages covered the awards screen. The judges admired `Di's Cranky Phone Calls', 'Camilla to Divorce' and revelations about John Major's early love life. Nor was this the end of the brass. The organisers summoned to a dinner-dance at the Lon- don Hilton none other than Lord Wake- ham, chairman of the Press Complaints Commission.

The commission's job is to make the press less intrusive, and it has spectacularly failed to do so. Standing there in his din- ner-jacket, Lord Wakeham looked like the Chicago police chief at a Friends of Al Capone benefit gala during Prohibition. He was told to hand out the prizes and shake the hands that had brought down a dozen of his former colleagues. I was amazed he did not 'make his excuses and leave'. Instead his lordship stood with a wan smile on his face and congratulated the News of the World, the Sun, the Daily Mirror and the Daily Mail. The News of the World celebrat- ed its award on Sunday by 'outing' yet another MP, Richard Spring, for a wholly private peccadillo. Mr Spring paid the News of the World the compliment of resigning.

As I left the Hilton, a colleague declared that nobody would dare criticise the occa- sion. It is not done for 'quality newspapers' to attack tabloid behaviour. They are expected to be primly above that sort of thing, or they risk being regarded as profes- sional wimps who never get their hands dirty on the 'real' stories. Besides, any criti- cism is sour grapes. The broadsheet editors who ran from the Hilton last week swearing they would boycott the awards next year would gladly accept any accolade if it was good for promotion.

Perhaps you should never 'honour' a journalist. Every good journalist is part saint, part rat. Honour the saint and you risk sanctifying the rat. The Americans have coped with this by sanctifying the entire profession. Their Pulitzer prize, named after the most scurrilous of propri- etors, puts reporters on a par with novelists and musicians. Awards go to papers that enjoy profitable monopolies and can thus keep reporters on stories for expensive lengths of time. Winners tend to be dull and worthy. This encourages American journalists in the belief that they are gods of the Republic, a little higher than Sena- tors.

The British press has never suffered such folie de grandeur. With Parliament offering no check on the executive and the Opposi- tion suffering from rampant narcissism, the press is the only institution that can be relied upon to be a running threat to the ministerial peace of mind. It is a perma- nent, irresponsible, unpredictable and vul- gar commentator on the Establishment. Politicians can lie, cheat, squander public money and ruin the lives of ordinary people with meddling legislation. The one thing that terrifies them out of their wits is the following day's front page and what their friends in the parliamentary club might think of it.

An American official is reduced to jelly by the threat of a summons from a congres- sional committee. The only thing that has a similar effect on a British politician is a call from a newspaper night editor. It terrorises them all, from the Prime Minister to the meanest parliamentary private secretary. Mr Aitken may have convinced the Prime Minister and the Cabinet secretary, Sir "Use both sides of the paper and no conferring.' Robin Butler, of his innocence over his links with Arab businessmen. He did not convince Fleet Street. War is duly declared. In a rough and ready way, this is how it should be. When foreigners comment on Britain's 'awful' press, I plead, 'But it's all we've got.'

My objection is not to the gun but to its aim, the archaic obsession of the tabloids with sex. All but two of the 17 scalps that Fleet Street claims to have cut from the heads of senior Tories of late are for sexual 'misbehaviour'. The misbehaviour is usually of a sort that none of the journalists con- cerned would recognise as such in them- selves or their colleagues. No politician is hounded from office for incompetence or wasting public money. It simply does not happen. The thinnest of justifications for sexual intrusion is that the victims are 'hyp- ocrites', that those who preach family val- ues and back-to-basics lay themselves open to intrusion, even if they are doing nothing that impinges on their public duties.

That is garbage. Most tabloids preach family values, yet show scant respect for the families of their victims. The revelation of the contents of private phone calls or of the personal misfortunes of relatives of rela- tives of the royal family are ethically inde- fensible. They are rarely 'investigative' and merely involve paying money to a snooping intermediary. They are also breaches of the code drawn up by all newspapers back in 1990. For the newspapers to break the code is bad enough. For the press blatantly to honour breaches of the code is breath-tak- ing. For the chairman of the Commission enforcing the code to hand out the honours personally beggars belief.

I want no privacy law. I cannot imagine anything more ludicrous or cumbersome or ineffective. I appreciate the tabloids and the irresponsibility and tastelessness they bring to Britain's otherwise dour public life. I would join Voltaire at the stake in their defence. I claim only one right in return: to protest when they hijack the phrase 'stan- dards in public life' to justify their moronic obsession with sexual voyeurism. The tabloids contribute nothing to good govern- ment. They merely invite a tougher leader than John Major to bring down censorship on all our heads.

Simon Jenkins writes for the Times. He was Highly Commended in the Columnist of the Year category of the British Press Awards.