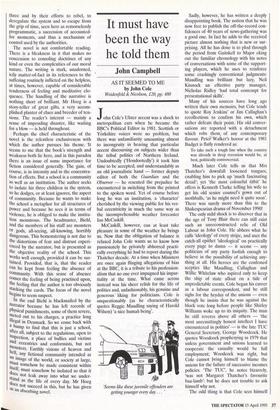 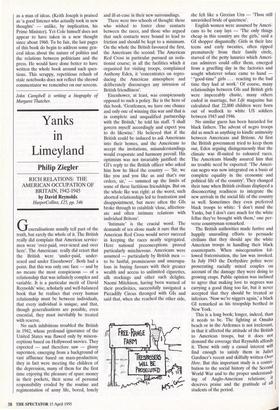 It must have been the way he told them

AS IT SEEMED TO ME by John Cole

John Cole's Ulster accent was a shock to metropolitan ears when he became the BBC's Political Editor in 1981. Scottish or Yorkshire voices were no problem, but there was unfamiliarity amounting almost to incongruity in hearing that particular accent discoursing on subjects wider than the tribal politics of Northern Ireland. Undoubtedly ('Hondootedly) it took him time to be accepted, and understandably as an old journalistic hand — former deputy editor of both the Guardian and the Observer — he resented the prejudice he encountered in switching from the printed to the spoken word. Yet of course before long he was an institution, a 'character' cherished by the viewing public for his ver- bal eccentricity in much the same way as the incomprehensible weather forecaster Ian McCaskill.

McCaskill, however, can at least take pleasure in some of the weather he brings us. Now that the obligation of balance is relaxed John Cole wants us to know how passionately he erivately abhorred practi- cally everything he had to report during the Thatcher decade. At a time when Ministers are once again flinging allegations of bias at the BBC, it is a tribute to his profession- alism that no one ever impugned his impar- tiality at the time. What came across instead was his sheer relish for the life of politics and, unfashionably, his genuine and generous - liking for politicians. Cole is unquestionably (as he characteristically quotes Reggie Maudling saying of Harold Wilson) 'a nice human being'.

'Seems like these juvenile offenders are getting younger every day . . . ' Sadly, however, he has written a deeply disappointing book. The notion that he was now free to publish the off-the-record con- fidences of 40 years of news-gathering was a good one. In fact he adds to the received picture almost nothing that is new or sur- prising. All he has done is to plod through the period from Gaitskell to Major eking out the familiar chronology with his notes of conversations with some of the support- ing players, which he uses to reinforce some crashingly conventional judgments: Maudling was brilliant but lazy, Neil Kinnock an effective party manager, Nicholas Ridley 'had total contempt for presentational skills'.

Many of his sources have long ago written their own memoirs, but Cole tends to quote Roy Jenkins' or Jim Callaghan's recollections to confirm his own, which rather defeats their point. His old conver- sations are reported with a detachment which robs them, of any contemporary flavour. Pete? Walker's horror at the 1981 Budget is flatly rendered as: To take such a tough line when the country was already in deep recession would be, at best, politically controversial.

Much later Cole tells us that Mrs Thatcher's downfall loosened tongues, enabling him to pick up 'much fascinating detail': yet 'the most colourful titbit' he offers is Kenneth Clarke telling his wife to get his old senior counsel's gown out of mothballs, 'as he might need it quite soon'. There was surely more than this to the Shakespearian drama of November 1990!

The only mild shock is to discover that in the age of Tony Blair there can still exist such an unreconstructed relic of Old Labour as John Cole. He abhors what he calls 'ideology' of every stripe, and uses the catch-all epithet 'ideological' on practically every page to damn — it seems — any politician of any party foolish enough to believe in the possibility of achieving any- thing at all. His heroes are the confessed sceptics like Maudling, Callaghan and Willie Whitelaw who aspired only to keep the ship of state afloat on a tide of unpredictable events. Cole began his career as a labour correspondent, and he still sighs for the heyday of the unions — even though he insists that he was against the block vote long before people like Shirley Williams woke up to its iniquity. The man he still reveres above all others — 'the most unremittingly honest intellect I have encountered in politics' — is the late TUC General Secretary, George Woodcock. He quotes Woodcock prophesying in 1979 that unless government and unions learned to cooperate the casualty would be full employment; Woodcock was right, but Cole cannot bring himself to blame the unions for the failure of successive incomes policies. 'The TUC', he .notes bizarrely, 'was not Margaret Thatcher's favourite baa-lamb': but he does not trouble to ask himself why not.

The odd thing is that Cole sees himself as a man of ideas. (Keith Joseph is praised as 'a good listener who actually took in new thoughts' — unlike, by implication, his Prime Minister). Yet Cole himself does not appear to have taken in a new thought since about 1960. To be fair, the last pages of this book do begin to address some gen- eral ideas about the nature of politics and the relations between politicians and the press. He would have done better to have written the whole book around such ques- tions. This scrappy, repetitious rehash of stale notebooks does not reflect the shrewd commentator we remember on our screens.

John Campbell is writing a biography of Margaret Thatcher.