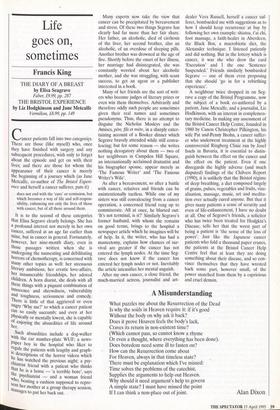 THE DIARY OF A BREAST by Elisa Seagrave Faber, £9.99, pp. 287 THE BRISTOL EXPERIENCE by Liz Hodgldnson and Jane Metcalfe Vermilion, <£8.99, pp. 149 ancer patients fall into two categories. There are those (like myself) who, once they have finished with surgery and any subsequent procedures, wish only to forget about the episode and get on with their lives; and there are those for whom the appearance of their cancer is merely the beginning of a journey which (as Jane Metcalfe, co-author of The Bristol Experi- ence and herself a cancer sufferer, puts it)

does not end with the 'cure' or remission, but which becomes a way of life and self-respon- sibility, enhancing not only the lives of those with cancer, but of all those around them.

It is to the second of these categories that Elisa Segrave clearly belongs. She has a profound interest not merely in her own cancer, suffered at an age far earlier than mine, but in cancer in general. Fortunately, however, her nine-month diary, even in those passages written when she is undergoing the nauseating and debilitating horrors of chemotherapy, is concerned with many other topics as well: her strenuous literary ambitions, her erratic love-affairs, her innumerable friendships, her adored Children. A born diarist, she deals with all these things with a piquant combination of Innocence and shrewdness, vulnerability and toughness, seriousness and comedy. There is little of that aggrieved or even angrY 'Why me?' to which a cancer patient Can so easily succumb; and even at her Physically or mentally lowest, she is capable of enjoying the absurdities of life around her.

Such absurdities include a dog-walker with the car number-plate WUF; a news- Paper boy in the hospital who likes to regale the patients with lengthy and graph- descriptions descriptions of the horror videos which Ile. has watched the previous night; a psy- ct htatrist friend with a patient who thinks hat he is a horse — 'a terrible bore', says _the psychiatrist — and a woman friend who, beating a cushion supposed to repre- sent her mother at a group therapy session, manages to put her back out. Many experts now take the view that cancer can be precipitated by bereavement and stress. Of these two things Segrave has clearly had far more than her fair share. Her father, an alcoholic, died of cirrhosis of the liver, her second brother, also an alcoholic, of an overdose of sleeping pills. Another brother was drowned at the age of five. Shortly before the onset of her illness, her marriage had disintegrated, she was constantly worried about her alcoholic mother, and she was struggling, with scant success, to get an agent or a publisher interested in a book.

Many of her friends are the sort of writ- ers who become judges of literary prizes or even win them themselves. Arbitrarily and therefore oddly such people are sometimes given their real names and sometimes pseudonyms. Thus, there is no attempt to disguise the Nicholas Mosleys and the Amises,pere, fils et mere, in a sharply enter- taining account of a Booker dinner which Segrave bravely attended while still conva- lescing; but for some reason — she writes nothing derogatory about them — two of her neighbours in Campden Hill Square, an internationally acclaimed dramatist and his biographer spouse, appear merely as The Famous Writer' and The Famous Writer's Wife'.

As after a bereavement, so after a battle with cancer, relatives and friends can be unintentionally tactless. While one of my sisters was still convalescing from a cancer operation, a concerned friend rang up to commiserate. All at once, he blurted out: 'It's not terminal, is it?' Similarly Segrave's former husband, with whom she remains on good terms, brings to the hospital a newspaper article which he imagines will be of help. In it, the writer, who has had a mastectomy, explains how chances of sur- vival are greater if the cancer has not entered the lymph nodes. At the time Seg- rave does not know if the cancer has entered her lymph nodes or not. Inevitably the article intensifies her mental anguish.

After my own cancer, a close friend, the much-married actress, journalist and art- dealer Vera Russell, herself a cancer suf- ferer, bombarded me with suggestions as to how I should keep recurrence at bay by following her own example: shiatsu, t'ai chi, foot massage, a faith-healer in Aberdeen, the Black Box, a macrobiotic diet, the Alexander technique. I listened patiently and did nothing. But in the lottery which is cancer, it was she who drew the card 'Execution' and I the one 'Sentence Suspended.' Friends similarly bombarded Segrave — one of them even proposing that she should 'go in for a rebirthing experience'.

A neighbour twice dropped in on Seg- rave a copy of the Bristol Programme, now the subject of a book co-authored by a patient, Jane Metcalfe, and a journalist, Liz Hodkinson, with an interest in complemen- tary medicine. In making any assessment of the Bristol Cancer Help Centre, founded in 1980 by Canon Christopher Pilldngton, his wife Pat and Penny Brohn, a cancer suffer- er who underwent treatment at the highly controversial Ringberg Clinic run by Josef Issels in Bavaria, it is essential to distin- guish between the effect on the cancer and the effect on the patient. Even if one disregards the highly adverse (and much disputed) findings of the Chilvers Report (1990), it is unlikely that the Bristol regime of deep breathing, a diet composed largely of grains, pulses, vegetables and fruits, visu- alisation, massage, music, art and medita- tion ever actually cured anyone. But that it gives many patients a sense of security and even of life-enhancement, I have no doubt at all. One of Segrave's friends, a solicitor who has twice been treated for Hodgkin's Disease, tells her that the worst part of being a patient is 'the sense of the loss of power'. Just like the Japanese cancer patients who fold a thousand paper cranes, the patients at the Bristol Cancer Help Centre feel that at least they are doing something about their disease, and so con- vince themselves that they have wrested back some part, however small, of the power snatched from them by a capricious and cruel demon.