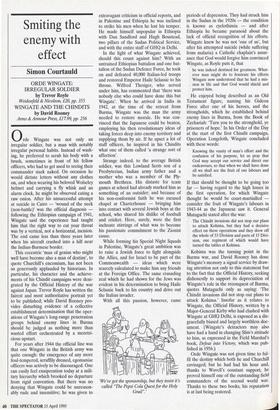 Smiting the enemy with effect

ORDE WINGATE: IRREGULAR SOLDIER by Trevor Royle Weidenfeld & Nicolson, £20, pp. 355 WINGATE AND THE CHINDITS by David Rooney Arms &Amour Press, £17.99, pp. 256 0 rde Wingate was not only an irregular soldier, but a man with notably irregular personal habits. Instead of wash- ing, he preferred to scrub his body with a brush, sometimes in front of his fellow officers, who had to get used to seeing their commander stark naked. On occasion he would dictate letters without any clothes on, and when wearing his beloved Wolseley helmet and carrying a fly whisk and an alarm clock, he might be observed eating a raw onion. After his unsuccessful attempt at suicide in Cairo — 'wound of the neck (non-battle)' was the official diagnosis — following the Ethiopian campaign of 1941, Wingate said the experience had taught him that the right way to cut your throat was by a vertical, not a horizontal, incision. The end came less than three years later when his aircraft crashed into a hill near the Indian-Burmese border.

This eccentric 'man of genius who might well have become also a man of destiny', to quote Churchill's encomium, has not been so generously applauded by historians. In particular, his character and the achieve- ments of his Chindit campaigns were deni- grated by the Official History of the war against Japan. Trevor Royle has written the fairest and most authoritative portrait yet to be published; while David Rooney pro- vides disturbing evidence of a collective establishment determination that the oper- ations of Wingate's long-range penetration groups behind enemy lines in Burma should be judged as nothing more than wasted effort orchestrated by a meretri- cious upstart.

For years after 1944 the official line was that one Wingate in the British army was quite enough: the emergence of any more foul-tempered, scruffily dressed, egomaniac officers was actively to be discouraged. One can easily feel exasperation today at a mili- tary hierarchy which brooked no departure from rigid convention. But there was no denying that Wingate could be unreason- ably rude and insensitive; he was given to extravagant criticism in official reports, and in Palestine and Ethiopia he was inclined to strike his men when he lost his temper. He made himself unpopular in Ethiopia with Dan Sandford and Hugh Boustead, two pillars of the Sudan Political Service, and with the entire staff of GHQ in Delhi.

In the light of what Wingate achieved, should this count against him? With an untrained Ethiopian battalion and one bat- talion of the Sudan Defence Force, he took on and defeated 40,000 Italian-led troops and restored Emperor Haile Selassie to his throne. Wilfred Thesiger, who served under him, has commented that 'there was nobody else who could have done this but Wingate'. When he arrived in India in 1942, at the time of the retreat from Burma, Wingate was the man the army needed to restore morale. He was con- vinced that the Japanese could be beaten, employing his then revolutionary ideas of taking forces deep into enemy territory and supplying them by air. If he upset a lot of staff officers, he inspired in his Chindits what one of them called 'a strange sort of affection'.

Strange indeed, to the average British soldier, was this Lowland Scots son of a Presbyterian, Indian army father and a mother who was a member of the Ply- mouth Brethren. His distaste for team games at school had already marked him as something of an outsider; and because of his non-conformist faith he was excused chapel at Charterhouse — bringing him into contact with several Jewish boys at the school, who shared his dislike of football and cricket. Here, surely, were the first inchoate stirrings of what was to become his passionate commitment to the Zionist cause.

While forming his Special Night Squads in Palestine, Wingate's great ambition was to raise a Jewish force to fight alongside the Allies, and for Israel to be part of the Commonwealth — ideas which were scarcely calculated to make him any friends at the Foreign Office. The same crusading zeal which he had shown for the Jews was evident in his determination to bring Haile Selassie back to his country and drive out the Italian invader.

With all this passion, however, came 'We've got the sponsorship, but they insist it's called "The Pepsi Cola Quest for the Holy Grail".' periods of depression. They had struck him in the Sudan in the 1920s — the condition is known as cyclothimia — and after Ethiopia he became paranoid about the lack of official recognition of his efforts. Wingate knew he was not 'one of us', but after his attempted suicide (while suffering from malaria) a Catholic chaplain's assur- ance that God would forgive him convinced Wingate, as Royle puts it, that

he was indeed destined for greatness. What- ever man might do to frustrate his efforts Wingate now understood that he had a mis- sion in life and that God would shield and protect him.

He enjoyed being described as an Old Testament figure, naming his Gideon Force after one of his heroes, and the strongholds, which he established behind enemy lines in Burma, from the Book of Zechariah: 'Turn you to the stronghold, ye prisoners of hope.' In his Order of the Day at the start of the first Chindit campaign, Operation Longcloth, Wingate concluded with these words:

Knowing the vanity of man's effort and the confusion of his purpose, let us pray that God may accept our service and direct our endeavours, so that when we shall have done all we shall see the fruit of our labours and be satisfied.

If that should be thought to be going too far — having regard to the high losses in the first operation, for which Wingate thought he would be court-martialled — consider the fruit of Wingate's labours in 1943-44 as the Japanese saw it. General Mutaguchi stated after the war:

The Chindit invasions did not stop our plans to attack Kohima, but they had a decisive effect on these operations and they drew off the whole of 53 Division and parts of 15 Divi- sion, one regiment of which would have turned the tables at Kohima.

Kohima was the turning point in the Burma war, and David Rooney has done Wingate's memory a signal service by draw- ing attention not only to this statement but to the fact that the Official History, seeking dishonestly to support its depreciation of Wingate's role in the reconquest of Burma, quotes Mutaguchi only as saying: 'The Chindit invasions did not stop our plans to attack Kohima.' Insofar as it relates to Wingate, the Official History, written by a Major-General Kirby who had clashed with Wingate at GHQ Delhi, is exposed as a dis- gracefully biased and largely worthless doc- ument. (Wingate's detractors may also have had a hand in changing Slim's attitude to him, as expressed in the Field Marshal's book, Defeat into Victory, which was pub- lished in 1956.) Orde Wingate was not given time to ful- fil the destiny which both he and Churchill envisaged; but he had had his hour and, thanks to Wavell's constant support, he proved himself one of the outstanding field commanders of the second world war. Thanks to these two books, his reputation is at last being restored.