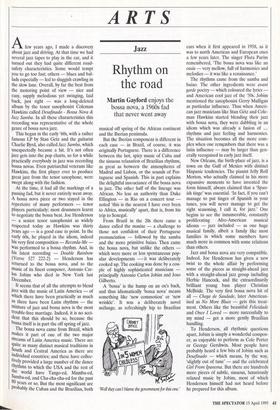 Rhythm on the road

Martin Gayford enjoys the bossa nova, a 1960s fad that never went away

Afew years ago, I made a discovery about jazz and driving. At that time we had several jazz tapes to play in the car, and it turned out they had quite different road- safety characteristics. Some would tempt you to go too fast; others — blues and bal- lads especially — led to sluggish crawling in the slow lane. Overall, by far the best from the motoring point of view — nice and easy, supply melodious yet swinging, laid back, just right — was a long-deleted album by the tenor saxophonist Coleman Hawkins called Desafinado - Bossa Nova & Jazz Samba. In all these characteristics this recording was representative of the whole genre of bossa nova jazz.

This began in the early '60s, with a rather famous LP by Stan Getz and the guitarist Charlie Byrd, also called Jazz Samba, which unexpectedly became a hit. It's not often jazz gets into the pop charts, so for a while practically everybody in jazz was recording bossa novas. Even patriarchal veterans like Hawkins, the first player ever to produce great jazz from the tenor saxophone, were swept along with the fashion.

At the time, it had all the markings of a Passing fad, but it never entirely went away. A bossa nova piece or two stayed in the repertoire of many performers — tenor Players particularly; most drummers learnt to negotiate the bossa beat. Joe Henderson a senior tenor saxophonist as widely respected today as Hawkins was thirty Years ago — is a good case in point. In the early 60s, he played in the idiom, indeed his very first composition — Recorda-Me — Was performed to a bossa rhythm. And, in his latest recording — Double Rainbow (Verve 527 222-2) — Henderson has returned to the bossa nova, and to the music of its finest composer, Antonio Car- los Jobim who died in New York last December.

It seems that of all the attempts to blend Jazz with the music of Latin America — of Which there have been practically as much as there have been Latin rhythms — the mixture of jazz and bossa nova is the most trouble-free marriage. Indeed, it is no acci- dent that this should be so, because the bossa itself is in part the off spring of jazz. The bossa nova came from Brazil, which makes it part of one of the two major streams of Latin America music. There are quite as many distinct musical traditions in South and Central America as there are individual countries; and these have collec- tively provided a large number of the dance rhythms to which the USA and the rest of the world have Tango-ed, Mamba-ed, Sambaed, and Cha-cha-cha-ed for the past 80 years or so. But the most significant are Probably the Cuban and the Brazilian, both musical off spring of the African continent and the Iberian peninsula.

But the Iberian component is different in each case — in Brazil, of course, it was originally Portuguese. There is a difference between the hot, spicy music of Cuba and the sinuous relaxation of Brazilian rhythms, as great as between the atmospheres of Madrid and Lisbon, or the sounds of Por- tuguese and Spanish. This in part explains the delightful insouciance of the bossa nova in jazz. The other half of the lineage was African. No less an authority than Duke Ellington — in Rio on a concert tour — noted 'this is the nearest I have ever been to Africa, musically' apart, that is, from his trip to Senegal.

From Brazil in the 20s there came a dance called the maxixe — a challenge to those not confident of their Portuguese pronunciation — followed by the samba and the more primitive baiao. Then came the bossa nova, but unlike the others — which were more or less spontaneous pop- ular developments —it was deliberately cooked up. The cooking was done by a cou- ple of highly sophisticated musicians — piinciipally Antonio Carlos Jobim and Joso Gilberto.

A 'bossa' is the hump on an ox's back, and thus idiomatically 'bossa nova' means something like 'new commotion' or 'new wrinkle'. It was a deliberately novel melange, as refreshingly hip to Brazilian Well they can't blame the government for this one.' ears when it first appeared in 1958, as it was to north American and European ones a few years later. The singer Flora Purim remembered, The bossa nova was like an oasis — very mellow, full of harmonies and melodies — it was like a renaissance.'

The rhythms came from the samba and baiao. The other ingredients were avant garde poetry — which coloured the lyrics — and American cool jazz of the '50s. Jobim mentioned the saxophonist Gerry Mulligan as particular influence. Thus when Ameri- can jazz musicians like Stan Getz and Cole- man Hawkins started blending their jazz with bossa nova, they were dabbling in an idiom which was already a fusion of .... rhythms and jazz feeling and harmonies. The situation becomes all the more com- plex when one remembers that there was a latin influence — may be larger than gen- erally recognised in early jazz itself.

New Orleans, the birth-place of jazz, is a town on the Gulf of Mexico with distinct Hispanic tendencies. The pianist Jelly Roll Morton, who actually claimed in his more expansive moments to have invented the form himself, always claimed that a 'Span- ish tinge' was essential. `In fact, if you can't manage to put tinges of Spanish in your tunes, you will never manage to get the right seasoning, I call it, for jazz.' One begins to see the innumerable, constantly proliferating Afro-American musical idioms — jazz included — as one huge musical family, albeit a family like most families in which some members have much more in common with some relations than others.

Jazz and bossa nova are very compatible. Indeed, Joe Henderson has given a new twist to the whole affair by performing some of the pieces as straight-ahead jazz with a straight-ahead jazz group including Herbie Hancock, and the extraordinarily brilliant young bass player Christian McBride. The very first bossa nova hit of all — Chega de Saudade, later American- ised as No More Blues — gets this treat- ment. Others like the beautiful Felicidade and Once I Loved — more successfully to my mind — get a more gently Brazilian handling.

To Henderson, all rhythmic questions apart, Jobim is simply a wonderful compos- er, as enjoyable to perform as Cole Porter or George Gershwin. Most people have probably heard a few bits of Jobim such as Desafinado — which means, by the way, 'slightly out of tune' — and the celebrated Girl From Ipanema. But there are hundreds more pieces of subtle, sinuous, luxuriously relaxed music by Jobim, most of which Henderson himself had not heard before he prepared for this album.