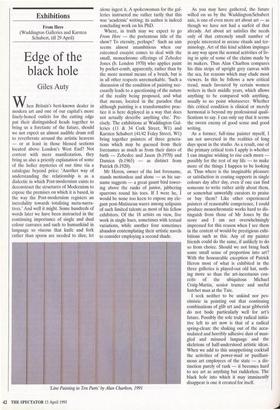 From Here (Waddington Galleries and Karsten Schubert, till 29 April)

Edge of the black hole

When Britain's best-known dealer in modern art and one of our capital's more finely-honed outlets for the cutting edge put their distinguished heads together to bring us a foretaste of the future, should we not expect an almost audible drum roll to reverberate around the artistic heavens — or at least in those blessed sections located above London's West End? Not content with mere manifestation, they bring us also a priestly explanation of some of the holier mysteries of our time via a catalogue beyond price: 'Another way of understanding the relationship is as a dialectic in which Post-modernism exists to deconstruct the structures of Modernism to expose the premises on which it is based, in the way the Post-modernism registers an incredulity towards totalising meta-narra- tives.' And well it might. Some hundreds of words later we have been instructed in the continuing importance of single and dual colour canvases and such to humankind in language so viscous that knife and fork rather than spoon are needed to slice, let alone ingest it. A spokeswoman for the gal- leries instructed me rather tartly that this was 'academic' writing; its author is indeed concluding work on his PhD.

Where, in truth may we expect to go From Here — the portentous title of the show? To eternity, perhaps? Such an aim seems almost unambitious when our esteemed essayist comes to deal with the small, monochrome offerings of Zebedee Jones (b. London 1970) who applies paint by pocket-comb, apparently, rather than by the more normal means of a brush, but is in all other respects unremarkable. 'Such a discussion of the condition of painting nec- essarily leads to a questioning of the nature of the reality being proposed, and what that means, located in the paradox that although painting is a transformative prac- tice it is here deployed in a way that does not actually describe anything else.' Pre- cisely. The exhibitions at Waddington Gal- leries (11 & 34 Cork Street, W1) and Karsten Schubert (41/42 Foley Street, W1) bring together painters of three genera- tions which may be guessed from their forenames as much as from their dates of birth — Zebedee and Jason (b.1970) and Damien (b.1965) — as distinct from Patrick (b.1920).

Mr Heron, owner of the last forename, stands motionless and alone — as his sur- name suggests — a great gaunt bird tower- ing above the ranks of junior, jabbering sparrows round his toes. If I were he, I would be none too keen to expose my ele- gant post-Matissean wares among solipsists of such limited talents as most of his fellow exhibitors. Of the 18 artists on view, five work in single hues, sometimes with textual variations, while another four sometimes abandon contemplating their artistic navels to consider employing a second shade.

'Line Painting in Ten Parts' by Alan Charlton, 1991 As you may have gathered, the future willed on us by the Waddington/Schubert axis, is one of even more art about art — as though we have not had a surfeit of that already. Art about art satisfies the needs only of that extremely small number of people interested in arcane rituals and ter- minology. Art of this kind seldom impinges in any way upon the normal activities of liv- ing in spite of some of the claims made by its makers. Thus Alan Charlton compares his thin strips of upright grey canvas with the sea, for reasons which may elude most viewers. In this he follows a new critical trend, much favoured by certain women writers in their middle years, which allows anything to be compared with anything, usually to no point whatsoever. Whether this critical condition is clinical or merely hormonal is beyond my professional quali- fications to say. I can only say that it seems the sworn enemy of good sense and good writing.

As a former, full-time painter myself, I am not unversed in the realities of long days spent in the studio. As a result, one of the primary critical tests I apply is whether I can imagine wishing to rise each morn — possibly for the rest of my life — to make more of the things I happen to be looking at. Thus where is the imaginable pleasure or satisfaction in coating supports in single colours day after day, even if one can find someone to write rather airily about them, or somewhat unworldly curators to praise or buy them? Like other experienced painters of reasonable competence, I could produce monochromatic works hard to dis- tinguish from those of Mr Jones by the score and I am not overwhelmingly impressed for this reason when I see them in the context of would-be prestigious exhi- bitions such as this. Any of my painter friends could do the same, if unlikely to do so from choice. Should we not bring back some small sense of proportion into art? With the honourable exception of Patrick Heron most of what is exhibited in the three galleries is played-out old hat, noth- ing more so than the art-incestuous con- ceits of the ubiquitous Michael Craig-Martin, senior trustee and useful hatchet man at the Tate.

I seek neither to be unkind nor pes- simistic in pointing out that continuing combinations of glib art and near gibberish do not bode particularly well for art's future. Possibly the sole truly radical initia- tive left to art now is that of a radical spring-clean; the shaking out of the accu- mulated and horribly adhesive dust of man- gled and misused language and the skeletons of half-understood artistic ideas. When we add to this unappetising cocktail the activities of power-mad or pusillani- mous art employees of the state — a dis- tinction purely of rank — it becomes hard to see art as anything but rudderless. The black hole into which it may imminently disappear is one it created for itself.