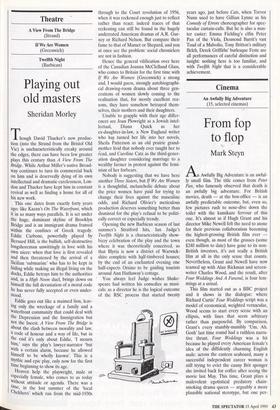 Though David Thacker's new produc- tion (into the Strand from the Bristol Old Vic) is uncharacteristically creaky around the edges, there can have been few greater plays this century than A View From The Bridge. While Arthur Miller's native Broad- way continues to turn its commercial back on him and is deservedly dying of its own intellectual and dramatic carelessness, Lon- don and Thacker have kept him in constant revival as well as finding a home for all of his new work.

This one dates from exactly forty years ago: like ICazan's On The Waterfront, which it in so many ways parallels. It is set under the huge, dominant skyline of Brooklyn Bridge and is an immigrant drama framed within the confines of Greek tragedy. Eddie Carbone, powerfully played by Bernard Hill, is the bullish, self-destructive longshoreman unwittingly in love with his own niece: when that love is first revealed and then threatened by the arrival of a Sicilian 'submarine' who has to be kept in hiding while making an illegal living on the clocks, Eddie betrays him to the authorities and, in a High Noon duel, brings down on himself the full devastation of a moral code he has never fully accepted or even under- stood.

Eddie goes out like a maimed lion, leav- ing only the wreckage of a family and a waterfront community that could deal with the Depression and the Immigration but not the Incest. A View From The Bridge is about the clash between morality and law, a code a honour and a way of life, but in the end it's only about Eddie, 'I mourn says the play's lawyer-narrator tut With a certain alarm, because he allowed himself to be wholly known'. This is a Mythic and epic play, only now for the first time beginning to show its age. Heaven help the playwright, male or especially female, who comes to us today Without attitude or agenda. There was a time, in the lost summer of the 'local Chekhovs which ran from the mid-1930s through to the Court revolution of 1956, when it was reckoned enough just to reflect rather than react: indeed traces of that reckoning can still be found in the hugely underrated American dramas of A.R. Gur- ney or Richard Nelson. But compare their fame to that of Mamet or Shepard, and you at once see the problem: social chroniclers are not in fashion.

Hence the general vilification over here of the Canadian Joanna McClelland Glass, who comes to Britain for the first time with If We Are Women (Greenwich) a strong and, I would guess, strongly autobiographi- cal drawing-room drama about three gen- erations of women slowly coming to the realisation that, for mostly excellent rea- sons, they have somehow betrayed them- selves, their mothers and their daughters.

Unable to grapple with their age differ- ences are Joan Plowright as a Jewish intel- lectual, Diana Quick as her ex-daughter-in-law, a New England writer who hap turned her life into her novels, Sheila Patterson as an old prairie grand- mother livid that nobody ever taught her to iead, and Caroline Catz as the third-gener- ation daughter considering marriage to a wealthy farmer in protest against the femi- nism of her forbears.

Nobody is suggesting that we have here another Three Sisters, but If We Are Women is a thoughtful, melancholic debate about the price women have paid for trying to change their lives against the masculine odds, and Richard Olivier's meticulous production deserves something better than dismissal for the play's refusal to be politi- cally correct or especially trendy.

Opening the new Barbican season of last summer's Stratford hits, Ian Judge's Twelfth Night is a characteristically show- bizzy celebration of the play and the town where it was theoretically conceived, so that Illyria is now a district of Warwick- shire complete with 141f-timbered houses; by the end of an enchanted evening one half-expects Orsino to be guiding tourists around Ann Hathaway's cottage.

You always feel Judge wishes Shake- speare had written his comedies as musi- cals: as a director he is the logical outcome of the RSC process that started twenty years ago, just before Cats, when Trevor Nunn used to have Gillian Lynne as his Comedy of Errors choreographer for spec- tacular curtain-calls. But he is also a mas- ter caster: Emma Fielding's elfin Peter Pan of the Viola, Desmond Barrit's vast Toad of a Malvolio, Tony Britton's military Belch, Derek Griffiths' burlesque Feste are all performances of careful distinction and insight: nothing here is too familiar, and with Twelfth Night that is a considerable achievement.