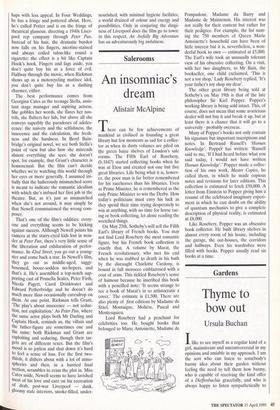 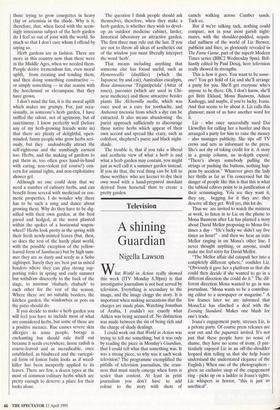 Thyme to bow out

Ilike to see myself as a regular kind of a girl, mainstream and uncontroversial in my opinions and amiable in my approach. I am the sort who can listen to somebody's barmy idea about their garden without feeling the need to tell them how barmy, who is capable of receiving the kind offer of a Dieffenbachia gracefully, and who is always happy to listen sympathetically to those trying to grow courgettes in heavy clay or artemisia in the shade. Why is it, therefore, that, when faced with the seem- ingly innocuous subject of the herb garden do I feel so out of joint with the world. So much so that I don't care whom I offend by saying so.

Herb gardens are in fashion. There are more in this country now than there were in the Middle Ages, when we needed them. People derive tremendous fun, even moral uplift, from creating and tending them, and then doing something constructive — or simply something — in due season with the horehound or elecampane that they have grown.

I don't mind the fun, it is the moral uplift which makes me grumpy. For, just occa- sionally, in someone's herb garden, I have sniffed the odour, not of agrimony, but of sanctimony. I know perfectly well (before any of my herb-growing friends write in) that there are plenty of delightful, open- minded, funny people who grow herbs seri- ously, but they undoubtedly attract the self-righteous and the numbingly earnest too. Herbs, and the making of gardens to put them in, too often goes hand-in-hand with caring, non-violent (of course!) con- cern for animal rights, and non-exploitative shower gel.

Although no one could deny that we need a number of culinary herbs, and can benefit from several with medicinal or cos- metic properties, I do wonder why there has to be such a song and dance about growing them. Why do they have to be dig- nified with their own garden, at the best paved and hedged, at the worst planted within the spokes of a horizontal wagon- wheel? Herbs look pretty in the spring with their fresh newly-minted leaves (but, then, so does the rest of the hardy plant world, with the possible exception of the yellow- leaved form of Sambucus) but by high sum- mer they are as dusty and seedy as a Soho nightspot. Surely they are best put in mixed borders where they can play strong sup- porting roles in spring and early summer but withdraw discreetly to the back of the stage, to murmur 'rhubarb, rhubarb' to each other for the rest of the season. Where there are no suitable borders, the kitchen garden, the windowbox or pots on the patio should do.

If you decide to make a herb garden you will feel you have to include most of what are considered herbs, but some of these are a positive menace. Rue causes severe skin allergies in some people, borage is enchanting but should rule itself out because it seeds everywhere, horse radish is coarse-leaved and as ineradicable, once established, as bindweed and the variegat- ed form of lemon balm looks as if weed- killer has been inexpertly applied to its leaves. There are few, a dozen types at the most of common culinary herbs which are pretty enough to deserve a place for their looks alone. The question I think people should ask themselves, therefore, when they make a herb garden, is whether they wish to devel- op an outdoor medicine cabinet, larder, historical laboratory or attractive garden. The first three may rule out the last. If you are not to throw all ideas of aesthetics out of the window you must liberally interpret the word 'herb'.

That means including anything that someone else has found useful, such as Hemerocallis (daylilies) (which the Japanese fry and eat), Australian eucalypts, Rosa damascena `Trigintipetala' (Attar of roses), paeonies (which are used in Chi- nese medicine) and those attractive border plants like Alchemilla mollis, which was once used as a cure for toothache, and Anthemis tinctoria from which a dye can be extracted. It also means abandoning the purist approach sufficiently to discourage those native herbs which appear of their own accord and spread like crazy, such as coltsfoot, shepherd's purse and black night- shade.

The trouble is, that if you take a liberal and aesthetic view of what a herb is and what a herb garden may contain, you might just as well call it a summer garden instead. If you do that, the real thing can be left to those worthies who are keener to dye their own wool with a hand-prepared mordant derived from horsetail than to create a pretty garden.