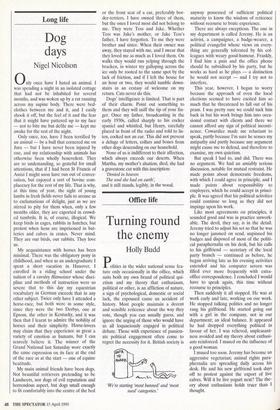 0 nly once have I hated an animal. I was spending a night in an isolated cottage that had not be inhabited for several months, and was woken up by a rat running across my supine body. There were bed- clothes between me and it, and I easily shook it off, but the feel of it and the fear that it might have pattered up to my face — not to bite me but defile me — kept me awake for the rest of the night.

Only once, too, have I been terrified by an animal — by a bull that cornered me on Jura — but I have never been injured by one, and my relationship with animals has otherwise been wholly benevolent. They are so undemanding, so grateful for small attentions, that if I had been St Francis of Assisi I might soon have run out of conver- sation, but enjoyed a sort of bovine com- placency for the rest of my life. That is why, at this time of year, the sight of young lambs in fresh fields never fails to arouse us to exclamations of delight, just as we are stirred to pity for them when, only a few months older, they are exported in crowd- ed tumbrils. It is, of course, illogical. We keep birds in cages, rabbits in hutches, but protest when hens are imprisoned in bat- teries and calves in crates. Never mind. They are our birds, our rabbits. They love us.

My acquaintance with horses has been minimal. There was the obligatory pony in childhood, and when as an undergraduate I spent a short vacation in Hanover, I enrolled in a riding school under the tuition of a cavalry Rittmeister whose disci- pline and methods of instruction were so severe that to this day my equestrian vocabulary in German exceeds that in any other subject. Twice only have I attended a horse-race, but both were in some style, since they were the two Derbys, one at Epsom, the other in Kentucky, and it was then that I learnt to admire the nobility of horses and their simplicity. Horse-lovers may claim that they experience as great a variety of emotion as humans, but I can scarcely believe it. The winner of the Grand National last Saturday wore exactly the same expression on its face at the end of the race as at the start — one of equine beatitude.

My main animal friends have been dogs. Not beautiful retrievers pretending to be Landseers, nor dogs of evil reputation and horrendous aspect, but dogs small enough to fit comfortably into the centre of the bed or the front seat of a car, preferably bor- der-terriers. I have owned three of them, but the ones I loved most did not belong to me. They were Tess and Jake. Whether Tess was Jake's mother, or Jake Tess's father, I have forgotten. To me they were brother and sister. When their owner was away, they stayed with me, and I swear that they loved me as much as I loved them. On walks they would run yelping through the bracken, in winter try galloping across the ice only be rooted to the same spot by the lack of friction, and if I left the house for an hour or two, they would tumble down- stairs in an ecstasy of welcome on my return. Cats never do this.

Dogs' intelligence is limited. That is part of their charm. Point out something to them and they will sniff the tip of your fin- ger. Once my father, broadcasting in the early 1930s, called sharply to his cocker spaniel and whistled, but Henry, carefully placed in front of the radio and told to lis- ten, cocked not an ear. This did not prevent a deluge of letters, collars and bones from other dogs descending on our household.

None of us is indifferent to their affection, which always exceeds our deserts. When Martha, my mother's alsation, died, she had a gravestone cut with this inscription: 'Denied in heaven The soul she had on earth', and it still stands, legibly, in the wood.