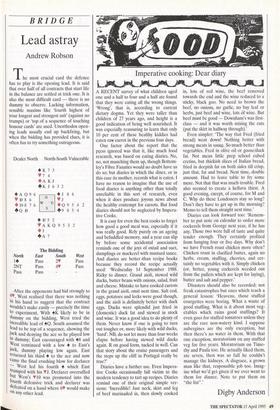 A RECENT survey of what children aged one and a half to four and a half ate found that they were eating all the wrong things. 'Wrong', that is, according to current dietary dogma. Yet they were taller than children of 27 years ago, and height is a good indication of being well nourished. It was especially reassuring to learn that only 10 per cent of these healthy kiddies had eaten raw carrot in the previous four days.

One factor about the report that the press ignored was that it, like much food research, was based on eating diaries. No, no, not munching them up, though Bottom- ley's Fibre Fanatics would no doubt have us do so; but diaries in which the diner, or in this case its mother, records what is eaten. I have no reason to imagine that the use of food diaries is anything other than totally unreliable in this sort of research, even when it does produce joyous news about the healthy contempt for carrots. But food diaries should not be neglected by Impera- tive Cooks.

It is easy for even the best cooks to forget how good a good meal was, especially if it was really good. Rely purely on an ageing and befuddled memory, and a year can slip by before some accidental association reminds one of the joys of oxtail and suet, dumplings or mackerel with mustard sauce. And diaries are better .than recipe books because they record the recipe actually used: 'Wednesday 14 September 1988. Ridky to dinner. Grand aioli, stewed wild ducks, butter beans with onions, salad, fruit and cheese. Mistake to have cooked carrots in the grand aioli, omit next time. Salt cod, eggs, potatoes and leeks were good though, and the aioli is _definitely better with duck eggs. Ducks were splendid just fried in (domestic) duck fat and stewed in stock and wine. It was a good idea to do plenty of them. Never know if one is going to turn out tougher or, more likely with wild ducks, 'hard'. NB, do not let more than four weeks elapse before having stewed wild ducks again. R on good form, tucked in well. Can that story about the cruise passengers and the steps up the cliff in Portugal really be true?' , Diaries have a further use. Even Impera- tive Cooks occasionally fall victim to the modern tendency to tart up recipes. Diaries remind one of their original simple ver- sions: 'Incredible! Just neck, skirt and leg of beef marinaded in, then slowly cooked in, lots of red wine, the beef removed towards the end and the wine reduced to a sticky, black goo. No need to brown the beef, no onions, no garlic, no bay leaf or herbs, just beef and wine, lots Of wine. But beef must be good — Downham's was first- class — and it was worth mixing the cuts (put the skirt in halfway through).'

Even simpler: 'The way that Fred (fried bread) went down! Nothing better with strong meats in sauce. So-much better than vegetables. Fred in olive oil or goose/duck fat. Not mean little prep school cubed cretins, but thickish slices of Italian bread, fried in deepish fat on both sides till crisp, just that, fat and bread. Next time, double amount. Had to leave table to fry some more. Not that that was much trouble. Fred also seemed to create a helluva thirst. A good evening, except, of course, for M and C. Why do these Londoners stay so long? Don't they have to get up in the morning? Memo to tell them straight next time.'

Diaries can look forward too: 'Remem- ber to put note on calendar to order more cockerels from George next year, if he has any. Those two were full of taste and quite tender enough. They certainly profited from hanging four or five days. Why don't we have French roast chicken more often? Chicken roast in clarified butter, again no herbs, cream, stuffing, cherries, and cer- tainly no vegetables with it. Simply chicken (or, better, young cockerels weeded out from the pullets which are kept for laying), butter and salt and pepper.'

Disasters should also be recorded; not freak catastrophes but ones which teach a general lesson: 'Heavens, those stuffed courgettes were boring. What a waste of good stuffing. What is it about most veg- etables which ruins good stuffings? It even goes for stuffed tomatoes unless they are the rare non-watery kind. I suppose aubergines are the only exception, but then there's no water in them. With that one exception, moratorium on any stuffed veg for five years. Moratorium on Timo- thy and Paula too. He actually liked them, ate seven, then was so full he couldn't manage the kidneys. A disgrace, a grown man like that, responsible job too. Imag- ine what we'd get given if we ever went to them for dinner. Note to put them on "the list".'