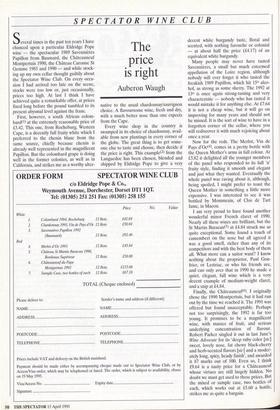 The price is right

Several times in the past ten years I have chanced upon a particular Eldridge Pope wine — the spectacular 1989 Savennieres Papillon from Baumard, the Chateauneuf Montpertuis 1990, the Château Caronne St Gemme 1985 and 1990 — and while stock- ing up my own cellar thought guiltily about the Spectator Wine Club. On every occa- sion I had arrived too late on the scene, stocks were too low or, just occasionally, prices too high. At last I think I have achieved quite a remarkable offer, at prices fixed long before the pound tumbled to its present abysmal level against the franc.

First, however, a south African colom- bare) at the extremely reasonable price of £3.42. This one, from Rocheburg, Western Cape, is a decently full fruity white which I preferred to the chenin blanc from the same source, chiefly because chenin is already well represented in the magnificent Papillon. But the colombard grape is doing well in the former colonies, as well as in California, and strikes me as a worthy alter- native to the usual chardonnay/sauvignon choice. A flavoursome wine, fresh and dry, with a much better nose than one expects from the Cape.

Every wine shop in the country is swamped in its choice of chardonnay, avail- able from new plantings in every corner of the globe. The great thing is to get some- one else to taste and choose, then decide if the price is right. This example(2) from the Languedoc has been chosen, blended and shipped by Eldridge Pope to give a very

Payment should be made either by accompanying cheque made out to Spectator Wine Club, or by Access/Visa order, which may be telephoned or faxed. The order, which is subject to availability, closes on 19 May 1995.

Many people may never have tasted Savennieres, a small but much esteemed appellation of the Loire region, although nobody will ever forget it who tasted the freakish 1989 Papillon, which hit 150 alco- hol, as strong as some sherry. The 1992 at 130 is once again strong-tasting and very characteristic — nobody who has tasted it would mistake it for anything else. At £7.64 it is not a cheap wine, but it will go on improving for many years and should not be missed. It is the sort of wine to have in a forgotten corner of the cellar, where you will rediscover it with much rejoicing about once a year.

Now for the reds. The Merlot, Vin de Pays d'Oc(4), comes in a pretty bottle with the Queen Mother's arms in full colour. At £3.82 it delighted all the younger members of the panel who responded to its full 'n' fruity style, finding it smooth and elegant and just what they wanted. Eventually the whole panel was raving about it, although, being spoiled, I might prefer to toast the Queen Mother in something a little more expensive. I was interested to see it was bottled by Mommesin, of Clos de Tart fame, in Macon.

I am very proud to have found another wonderful minor French claret of 1990. Nearly all these wines are brilliant, but the St Martin Baracan(5) at £4.84 struck me as quite exceptional. Some found a touch of camembert on the nose but all agreed it was a good smell, richer than any of its competitors and with the best body of them all. What more can a suitor want? I know nothing about the proprietor, Paul Gon- frier, or Lestriac, or who his friends are, and can only aver that in 1990 he made a quiet, elegant, full wine which is a very decent example of medium-weight claret, and a snip at £4.84.

Finally, the Chateauneug6). I originally chose the 1990 Montpertuis, but it had run out by the time we reached it. The 1991 was offered but found unacceptable. Perhaps not too surprisingly, the 1992 is far too young. It promises to be a magnificent wine, with masses of fruit, and serious underlying concentration of flavour. Robert Parker singled it out in last June's Wine Advocate for its 'deep ruby color [sic] sweet, lovely nose, fat chewy black-cherry and herb-scented flavors [sic] and a moder- ately long, spicy, heady finish', and awarded it 87 marks out of 100. Even so, I think £9.64 is a nasty price for a Chateauneuf whose virtues are still largely hidden. No doubt we must get used to these prices. But the mixed or sample case, two bottles of each, which works out at £5.60 a bottle, strikes me as quite a bargain.