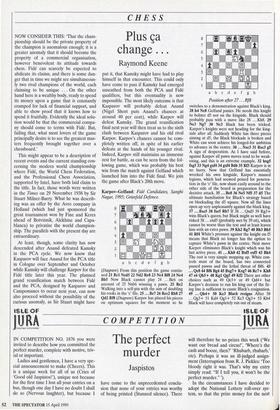 NOW CONSIDER THIS: 'That the cham- pionship should be the private property of the champion is anomalous enough; it is a greater anomaly that it should become the property of a commercial organisation, however benevolent its attitude towards chess. Fide can scarcely be expected to abdicate its claims, and there is some dan- ger that in time we might see simultaneous- ly two rival champions of the world, each claiming to be unique . . . On the other hand here is a wealthy body, ready to spend its money upon a game that is constantly cramped for lack of financial support, and able to show proof that it knows how to spend it fruitfully. Evidently the ideal solu- tion would be that the commercial compa- ny should come to terms with Fide. But, failing that, what most lovers of the game principally desire is to see the greatest mas- ters frequently brought together over a chessboard.'

This might appear to be a description of recent events and the current standing con- cerning the modern world championship where Fide, the World Chess Federation, and the Professional Chess Association, supported by Intel, have both laid claim to the title. In fact, those words were written in the Times on 29 November 1938 by Sir Stuart Milner-Barry. What he was describ- ing was an offer by the Avro company in Holland (which had just sponsored the great tournament won by Fine and 'Ceres ahead of Botvinnik, Alekhine and Capa- blanca) to privatise the world champion- ship. The parallels with the present day are extraordinary.

At least, though, some clarity has now descended after Anand defeated Kamsky in the PCA cycle. We now know that Kasparov will face Anand for the PCA title in Cologne over September and October while Kamsky will challenge Karpov for the Fide title later this year. The planned grand reunification match between Fide and the PCA, designed by Kasparov and Campomanes to occur next year, can now also proceed without the possibility of the curious anomaly, as Sir Stuart might have put it, that Kamsky might have had to play himself in that encounter. This could only have come to pass if Kamsky had emerged unscathed from both the PCA and Fide qualifiers, but this eventuality is now impossible. The most likely outcome is that Kasparov will probably defeat Anand (Nigel Short puts Anand's chances at around 40 per cent), while Karpov will defeat Kamsky. The grand reunification final next year will then treat us to the sixth clash between Kasparov and his old rival Karpov. Karpov's chances cannot be com- pletely written off, in spite of his earlier defeats at the hands of his younger rival. Indeed, Karpov still maintains an immense zest for battle, as can be seen from the fol- lowing game, which was probably his best win from the match against Gelfand which launched him into the Fide final. We join the game after Black's 20th move.