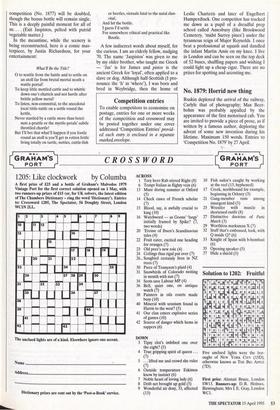 A first prize of £25 and a bottle of Graham's Malvedos 1979 Vintage Port for the first correct solution opened on I May, with two runners-up prizes of £15 (or, for UK solvers, the latest edition of The Chambers Dictionary - ring the word 'Dictionary'). Entries to: Crossword 1205, The Spectator, 56 Doughty Street, London WC IN 2LL.

The unclued lights are of a kind. Elsewhere ignore one accent.

Dictionary prizes are sent out by the 'Post-a-Book' service.

5 lifted me and crowd she rules