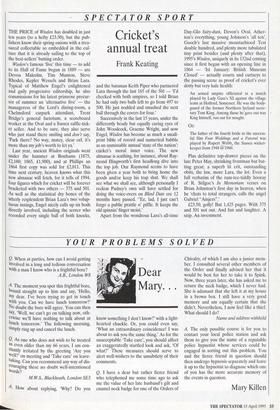 THE PRICE of Wisden has doubled in just ten years (to a hefty £23.50), but the pub- lishers know their spring onions with a trea- sured collectable so embedded in the cul- ture that it is already sailing to the top of the best-sellers' batting order.

Wisden's famous 'five' this time — to add to its Hall of Fame begun in 1889 — are Devon Malcolm, Tim Munton, Steve Rhodes, Kepler Wessels and Brian Lara. Typical of Matthew Engel's enlightened and gaily progressive editorship, he also commissions for his latest primrose precur- sor of summer an 'alternative five' — the manageress of the Lord's dining-room, a Chelmsford carpark attendant, Trent Bridge's general factotum, a scoreboard worker at the Oval and a Sussex raffle-tick- et seller. And to be sure, they also serve Who just stand there smiling and don't say, 'Park there? No way, matey, clear oil, it's more than my job's worth to let ya.'

Last year, ancient Wisden originals went under the hammer at Bonhams (1875, £2,180; 1865, £1,900), and at Phillips an 1864 first copy was sold for £2,011. This time next century, heaven knows what this new almanac will fetch, for it tells of 1994, four figures which for cricket will be forever bracketed with two others — 375 and 501. As well as the statistical dry bones of the utterly resplendent Brian Lara's two volup- tuous innings, Engel nicely calls up six bods directly involved, including the scorer who recorded every single ball of both knocks, and the batsman Keith Piper who partnered Lara through the last 165 of the 501 — `I'd checked with both umpires, so I told Brian he had only two balls left to go from 497 to 500. He just nodded and smashed the next ball through the covers for four.'

Successively in the last 15 years, under the differently beady but equally caring eyes of John Woodcock, Graeme Wright, and now Engel, Wisden has become as much a small- print bible of record and numerical babble as an unmissable annual 'state of the nation': cticket's moral inner voice. The new almanac is scathing, for instance, about Ray- mond Mingworth's first headlong dive into the top job. Our Raymond seems to have been given a year both to bring home the goods and/or keep his trap shut. We shall see what we shall see, although personally I reckon Pudsey's own will have settled for doing the voice-overs on Blind Date ere 12 months have passed. "Ee, lad, I just can't forgo a public prattle o' piffle. It keeps the old spinnin' finger moist.'

Apart from the wondrous Lara's all-time Day-Glo fairy-dust, Devon's Oval, Ather- ton's everything, young Johnson's 'all ten', Gooch's last massive moustachioed Test double hundred, and plenty more tabulated tiny print besides (and plenty after that), 1995's Wisden, uniquely in its 132nd coming since it first began with an opening line in 1864 — '1st January: British Museum Closed' — actually courts and curtseys to the passing scene as proof of cricket's ever dotty but very hale health:

An armed umpire officiated in a match played by Lady Gass's XI against the village team at Holford, Somerset. He was the body- guard of the former Northern Ireland secre- tary Tom King. Among those he gave out was King himself, run out for nought.

Or: The father of the fourth bride in the success- ful film Four Weddings and a Funeral was played by Rupert Webb, the Sussex wicket- keeper from 1948 tO 1960.

Plus definitive top-drawer pieces on the late Peter May, shrinking frontman but bat- ting great; a superb lit crit, outstanding obits, the law, more Lara, the lot. Even a full verbatim of the rum-tee-tiddly hooray of R. Stilgoe's In Memoriam verses on Brian Johnston's first day in heaven, when he 'chats to total strangers, calls the angel Gabriel "Ainjers".'