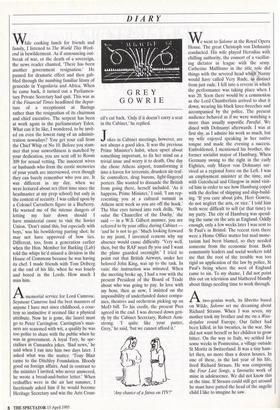 GREY GOWRIE Wile cooking lunch for friends and family, I listened to The World This Week- end in bewilderment. As if announcing out- break of war, or the death of a sovereign, the news reader chanted, 'There has been another government resignation.' He paused for dramatic effect and then gab- bled through the numbing familiar litany of genocide in Yugoslavia and Africa. When he came back, it turned out a Parliamen- tary Private Secretary had quit. This was as if the Financial Times headlined the depar- ture of a receptionist at Barings rather than the resignation of its chairman and chief executive. The serpent has been at work again in the parliamentary Eden. What can it be like, I wondered, to be invit- ed on even the lowest rung of an adminis- tration nowadays? You get your call from the Chief Whip or No 10. Before you stam- mer that your unworthiness is matched by your dedication, you are sent off to Room 309 for sexual vetting. The innocent wives or husbands who form the erotic memories of your youth are interviewed, even though they can barely remember who you are. It was different in my day, when we were lectured about sex (first time since the headmaster at my prep school) but only in the context of security. I was called upon by a Colonel Carruthers figure in a Burberry. He warned me of the intense dangers of letting my hair down should I have ministerial cause to visit the Soviet Union. 'Don't mind this, but especially with boys,' was his bewildering parting shot; he may not have approved of bow ties. Different, too, from a generation earlier when the Hon. Member for Barking (Lab) told the whips he'd missed a division in the House of Commons because he was having its chef. I made friends with Tom Driberg at the end of his life, when he was lonely and bored in the Lords. How much I miss him.

Amemorial service for Lord Camrose. Seymour Camrose had the best manners of anyone I have met since childhood, a cour- tesy so instinctive it seemed like a physical attribute. Now he is gone, the laurel must go to Peter Carrington. Carrington's man- ners are seasoned with wit, a quality he was too polite to share with the public when he was in government. A loyal Tory, he spe- cialises in Cassandra jokes. 'Bad news,' he said when I ran into him two days later. I asked what was the matter. 'Tony Blair came to the Ditchley Foundation. Bloody good on foreign affairs. And in contrast to the minister I invited, who never answered, he wrote a bread-and-butter letter.' When reshuffles were in the air last summer, I facetiously asked him if he would become Heritage Secretary and win the Arts Coun- cil's cut back. 'Only if it doesn't carry a seat in the Cabinet,' he replied.

Jokes in Cabinet meetings, however, are not always a good idea. It was the previous Prime Minister's habit, when upset about something important, to fix her mind on a trivial issue and worry it to death. One day she chose Athens airport, transforming it into a haven for terrorists, drunken air-traf- fic controllers, drug barons, light-fingered porters. She wanted to dissuade the British from going there, herself included. 'As it happens, Prime Minister,' I said, 'I am rep- resenting you at a cultural summit in Athens next week so you are off the hook.' The blue eyes turned into rock drills. 'We value the Chancellor of the Duchy,' she said — in a W.S. Gilbert manner, you are referred to by your office during Cabinet — 'and he is not to go.' Much looking forward to my jaunt, I invented reasons why my absence would cause difficulty. 'Very well, then, but the RAF must fly you and I want the plane guarded overnight.' I tried to point out that British Airways, under her beloved John King, was up to the task. In vain: the instruction was minuted. When the meeting broke up, I had a row with the present President of the Board of Trade about who was going to pay. In love with my boss, then as now, I insisted on the impossibility of underfunded dance compa- nies, theatres and orchestras picking up an MoD bill. To his credit, the present Pres agreed in the end. I was dressed down gen- tly by the Cabinet Secretary, Robert Arm- strong. 'I quite like your patter, Grey,' he said, 'but we cannot afford it.'

'Any chance of a fatwa on ITV?' went to Salome at the Royal Opera House. The great Christoph von Dohnanyi conducted. His wife played Herodias with chilling authority, the consort of a vacillat- ing dictator in league with the army. Catherine Malfitano in the title role did things with the severed head which Nanny would have called Very Rude, as distinct from just rude. I fell into a reverie in which the performance was taking place when I was 20. Soon there would be a commotion as the Lord Chamberlain arrived to shut it down, wearing his black knee-breeches and accompanied by the police. The present audience behaved as if we were watching a more than usually soporific Parsifal. We dined with Dohnanyi afterwards. I was at first shy, as I admire his work so much, but my wife enjoyed speaking in her native tongue and made the evening a success. Emboldened, I mentioned his brother, the former socialist mayor of Hamburg. When Germany swung to the right in the early Eighties, only Mayor von Dohnanyi sur- vived as a regional force on the Left. I was an employment minister at the time, and with Gateshead and Glasgow in mind visit- ed him in order to see how Hamburg coped with the decline of shipping and ship-build- ing. 'If you care about jobs, Herr Gowrie, do not neglect the arts, or vice.' I told him both were difficult to sell (at that time) to my party. The city of Hamburg was spend- ing the same on the arts as England. Oddly enough, only a few weeks later I was sent to St Paul's in Bristol. The recent riots there were a Home Office matter but mad mone- tarism had been blamed, so they needed someone from the economic front. Both community leaders and social workers told me that the root of the trouble was too rigid an application of the law by police, St Paul's being where the west of England came to sin. To my shame, I did not point this out on television and blathered blandly about things needing time to work through.

Atwo-genius work, its libretto based on Wilde, Salome set me dreaming about Richard Strauss. When I was seven, my mother took my brother and me on a Wan- detjahre round Europe. Our father had been killed, in his twenties, in the war. She did not want herself or her children to grow bitter. On the way to Italy, we settled for some weeks in Pontresina, a village outside St Moritz in Switzerland. It was a tiny ham- let then, no more than a dozen houses. In one of these, in the last year of his life, lived Richard Strauss. He was composing the Four Last Songs, a favourite work of mine in adolescence. We did not know this at the time. If Strauss could still get around he must have patted the head of the angelic child I like to imagine he saw.