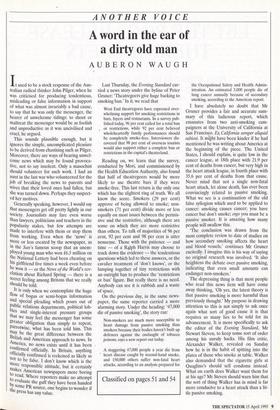 A word in the ear of a dirty old man

It used to be a stock response of the Aus- tralian radical thinker John Pilger, when he was criticised for producing tendentious, misleading or false information in support of what was almost invariably a bad cause, to say that he was only the messenger, the bearer of unwelcome tidings: to shoot or maltreat the messenger would be as foolish and unproductive as it was uncivilised and cruel, he argued.

This sounds plausible enough, but it ignores the simple, uncomplicated pleasure to be derived from chastising such as Pilger. Moreover, there are ways of bearing unwel- come news which may be found provoca- tive, not to say insolent. Only a masochist should volunteer for such work. I had an aunt in the last war who volunteered for the job of breaking the news to parents and wives that their loved ones had fallen, but she was turned down. Perhaps they suspect- ed her motives.

Generally speaking, however, I would say that messengers get off pretty lightly in our society. Journalists may fare even worse than lawyers, politicians and teachers in the Popularity stakes, but few attempts are made to interfere with them or stop them from working. Even when the 'news' is more or less created by the newspaper, as in the Sun's famous scoop that an unem- ployed young man who won £6.5 million on the National Lottery had been cheating on his girlfriend five times a week even before he won it — or the News of the World's rev- elation about Richard Spring — there is a secret feeling among Britons that we really Should be told. It is only when we contemplate the huge flow of bogus or semi-bogus information and special pleading which pours out of Public relations departments, political lob- bies and single-interest pressure groups that we may feel the messenger has some greater obligation than simply to repeat, Parrotwise, what has been told him. This may be the great difference between the British and American approach to news. In America, no news exists until it has been confirmed officially. In Britain, anything Officially confirmed is reckoned as likely as not to be false. I don't know which is the more responsible attitude, but it certainly makes American newspapers more boring to read. Where reporters make no attempt to evaluate the guff they have been handed by some PR source, one begins to wonder if the press has any value. Last Thursday, the Evening Standard car- ried a news story under the byline of Peter Gruner: 'Theatregoers give huge backing to smoking ban.' In it, we read that

West End theatregoers have expressed over- whelming support for smoking restrictions in bars, foyers and restaurants. In a survey pub- lished today, 96 per cent called for a total ban or restrictions, while 92 per cent believed wholeheartedly family performances should be completely smoke-free. Interviewers dis- covered that 98 per cent of overseas tourists would also support either a complete ban or restrictions in the capital's theatreland.

Reading on, we learn that the survey, conducted by Mori, and commissioned by the Health Education Authority, also found that half of theatregoers would be more likely to use theatre bars if they were smoke-free. This last return is the only one which has the slightest ring of truth. We all know the score. Smokers (29 per cent) approve of being allowed to smoke; non- smokers (71 per cent) divide more or less equally on most issues between the permis- sive and the restrictive, although there are some on which they are more restrictive than others. To talk of majorities of 96 per cent, 92 per cent and 98 per cent is utter nonsense. Those with the patience — and time — of a 14lph Harris may choose to track down the evidence — the tendentious questions which led to these answers, or the cavalier treatment of 'don't knows', or the lumping together of tiny restrictions with an outright ban to produce the 'restrictions or ban' figure. But really there is no need. Anybody can see it is rubbish and a waste of space.

On the previous day, in the same news- paper, the same reporter carried a more alarming story. Under the heading: '47,000 die of passive smoking', the story ran:

Non-smokers are much more susceptible to heart damage from passive smoking than smokers because their bodies haven't built up defences against the onslaught of tobacco poisons, says a new report out today.

A staggering 47,000 people a year die from heart disease caught by second-hand smoke, and 150,000 others suffer non-fatal heart attacks, according to an analysis prepared for

the Occupational Safety and Health Admin- istration. An estimated 3,000 people die of lung cancer annually because of secondary smoking, according to the American report.

I have absolutely no doubt that Mr Gruner provides a fair and accurate sum- mary of this ludicrous report, which emanates from two anti-smoking cam- paigners at the University of California at San Francisco. Ex California semper aliquid rabiosi. It nuNht have been kinder if he had mentioned he was writing about America at the beginning of the piece. The United States, I should explain, is quite low in the cancer league, at 18th place with 21.9 per cent of deaths from cancer, but very high in the heart attack league, in fourth place with 35.6 per cent of deaths from that cause. Never mind that not a single non-fatal heart attack, let alone death, has ever been convincingly related to passive smoking. What we see is a continuation of the old false syllogism which used to be applied to cancer: smoking causes cancer; you have cancer but don't smoke; ergo you must be a passive smoker. It is amazing how many people will swallow this.

'The conclusion was drawn from the most complete review to date of studies on how secondary smoking affects the heart and blood • vessels,' continues Mr Gruner excitedly. I imagine this is his way of saying no original research was involved. `It also heightens the debate over passive smoking, indicating that even small amounts can endanger non-smokers.'

The depressing thing is that most people who read this news item will have come away thinking, 'Oh yes, the latest theory is that passive smoking is more harmful than previously thought.' My purpose in drawing attention to this is not simply to ask once again what sort of good cause it is that requires so many lies to be told for its advancement It is more specifically to ask the editor of the Evening Standard, Mr Stewart Steven, to keep some sort of order among his unruly hacks. His film critic, Alexander Walker, revealed on Sunday how he is in the habit of spitting into the plates of those who smoke at table. Walker also demanded that the cigarette girls at Quaglino's should sell condoms instead. What on earth does Walker want them for at his age? Mr Steven should warn him that the sort of thing Walker has in mind is far more conducive to a heart attack than a lit- tle passive smoking.