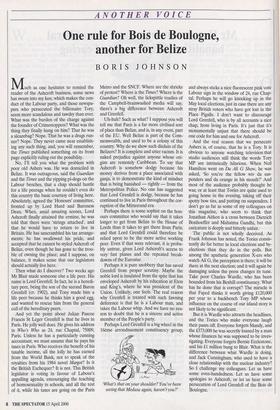 One rule for Bois de Boulogne, another for Belize

Much as one hesitates to remind the reader of the Ashcroft business, some news has swum into my ken, which makes the con- duct of the Labour party, and those newspa- pers who persecuted the billionaire Tory, seem more scandalous and tawdry than ever. What was the burden of the charge against the founder of Crimestoppers? What was the thing they finally hung on him? That he was a sleazebag? Nope. That he was a drugs run- ner? Nope. They never came near establish- ing any such thing, and, you will remember, the Times published something on its front page explicitly ruling out the possibility.

No, I'll tell you what the problem with poor old Ashers was. He was domiciled in Belize. It was outrageous, said the Guardian and the Times and the yipping pi-dogs on the Labour benches, that a chap should hustle for a life peerage when he couldn't even do this country the basic courtesy of living here. Absolutely, agreed the 'Honours' committee, fronted up by Lord Hurd and Baroness Dean. When, amid amazing scenes, Lord Ashcroft finally attained the ermine, he was told that there were 'strings attached', and that he would have to return to live in Britain. He has unscrambled his tax arrange- ments; he has swallowed his pride, and accepted that he cannot be styled Ashcroft of Belize, even though he has gone to the trou- ble of owning the place; and I suppose, on balance, it makes sense that our legislators should actually live here.

Then what do I discover? Two weeks ago Mr Blair made someone else a life peer. His name is Lord Grenfell. In fact, he is a heredi- tary peer, being the son of the second Baron Grenfell (Cr. 1902), and Tony made him a life peer because he thinks him a good egg, and wanted to rescue him from the general cull of the hereditary peers.

And yet the point about Julian Pascoe Francis St Leger Grenfell is that he lives in Paris. He jolly well does. He gives his address in Who's Who as 24, rue Chaptal, 75009, Paris. Unless he has a particularly cunning accountant, we must assume that he pays his taxes in Paris. Who receives the benefit of his taxable income, all the lolly he has earned from the World Bank, not to speak of the royalties from his 1984 novel Margot? Is it the British Exchequer? It is not. This British legislator is voting in favour of Labour's appalling agenda, encouraging the teaching of homosexuality in schools, and all the rest of it, while his taxes are going on the Paris Metro and the SNCF. Where are the shrieks of protest? Where is the Times? Where is the Guardian? Oh well, the lickspittle toadies of the Campbell-brainwashed media will say, there's a big difference between Ashcroft and Grenfell.

Uh-huh? Such as what? I suppose you will tell me that Paris is a far more civilised sort of place than Belize, and is, in any event, part of the EU. Well Belize is part of the Com- monwealth, and used to be a colony of this country. Why do we show such disdain of the Belizers? It is complete and utter racism. It is naked prejudice against anyone whose ori- gins are remotely Caribbean. To say that Ashcroft is somehow dodgy because his money derives from a place associated with ganja, is to demonstrate the kind of mindset that is being banished — rightly — from the Metropolitan Police. No one has suggested that Lord Grenfell is dodgy, because he has continued to live in Paris throughout the cor- ruption of the Mitterrand era.

Perhaps there is some sophist on the hon- ours committee who would say that it takes longer to get from Belize to the House of Lords than it takes to get there from Paris; and that Lord Grenfell could therefore be relied upon to be the more active working peer. Even if that were relevant, it is proba- bly untrue, given Lord Ashcroft's access to very fast planes and the repeated break- downs of the Eurostar.

Perhaps it is pure snobbery that has saved Grenfell from proper scrutiny. Maybe the noble lord is insulated from the spite that has enveloped Ashcroft by his education at Eton and King's, where he was president of the Union. Unlikely, one feels. The real reason why Grenfell is treated with such fawning deference is that he is a Labour man, and takes the Labour whip. And we have no rea- son to doubt that he is a sincere and active member of the People's party.

Perhaps Lord Grenfell is a big wheel in the 16eme arrondissement constituency group, 'What's that on your shoulder? You've been seeing that Medusa again, haven't you?' and always sticks a nice fluorescent pink vote Labour sign in the window of 24, rue Chap- tal. Perhaps he will go knocking up in the May local elections, just in case there are any stray British voters who have got lost in the Place Pigalle. I don't want to discourage Lord Grenfell, who is by all accounts a nice chap, from living in Paris. It's just that it's monumentally unjust that there should be one code for him and one for Ashcroft.

And the real reason that we persecute Ashers is, of course, that he is a Tory. It is obvious to anyone watching television that studio audiences still think the words Tory MP are intrinsically hilarious. When Neil Hamilton went on Da Au G Show, he was asked, 'So you're the fellow wiv da sus- penders and da orange in his mouth?' And most of the audience probably thought he was; or at least that Tories are quite used to going home in the evening, taking off their spotty bow ties, and putting on suspenders. I don't go as far as some of my colleagues on this magazine, who seem to think that Jonathan Aitken is a cross between Dietrich Bonhoeffer and Mahatma Gandhi, but this caricature is deeply and bitterly unfair.

The public is not wholly deceived. As Frank Johnson has noted, the Tories consis- tently do far better in local elections and by- elections than they do in the polls. But among the apathetic generation X-ers who watch All G, the perception is there; it will be there at the next election; and it will again be damaging unless the press changes its tune. Take poor Charles Wardle, who has been hounded from his Bexhill constituency. What has he done that is corrupt? The miracle is that Fayed thinks it worth giving £120,000 per year to a backbench Tory MP whose influence on the course of our island story is not likely to be significant.

But it is Wardle who attracts the headlines, and the Tories who make everyone laugh their pants off. Everyone forgets Mandy, and the £373,000 he was secretly loaned by a man whose finances he was supposed to be inves- tigating. Everyone forgets Bernie Ecclestone, and his £1 million bung to Blair. What is the difference between what Wardle is doing, and Jack Cunningham, who used to have a close relationship with the nuclear industry? So I challenge my colleagues. Let us have some even-handedness. Let us have some apologies to Ashcroft, or let us hear some persecution of Lord Grenfell of the Bois de Boulogne.