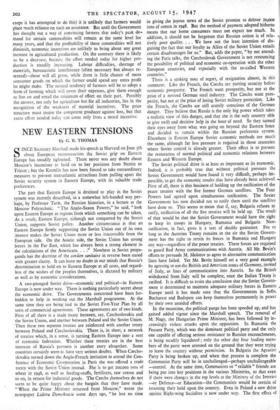 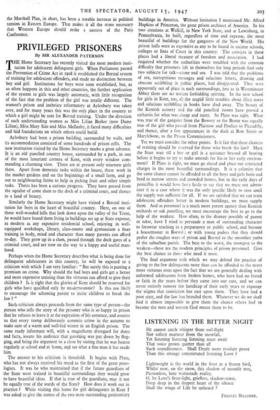 SINCE Secretary Marshall made his speech at Harvard on June 5th about European reconstruction the Soviet grip on Eastern Europe has steadily tightened. There never was any doubt about Moscow's intentions to hold on to her positions from Stettin to Trieste ; but the Kremlin has now been forced to take extraordinary measures to prevent transatlantic attractions from pulling apart the Soviet security system in Eastern Europe, with its valuable trade preferences.

The part that Eastern Europe is destined to play in the Soviet system was recently described, in a somewhat left-handed way per- haps, by Professor Tarle, the Russian historian, in a lecture at the Moscow Polytechnic. " The Anglo-Saxon Powers," he said, " look upon Eastern Europe as regions from which something can be taken. As a result, Eastern Europe, although not conquered by the Soviet Union, supports Soviet policy. Another circumstance is that an Eastern Europe firmly supporting the Soviet Union out of its own interest makes the Soviet Union more or less inaccessible from the European side. On the Asiatic side, the Soviet Union has strong forces in the Far East, which has always been a strong element in the calculations of the Americans. . . ." Nowhere in Soviet propa- ganda has the doctrine of the cordon sanitaire in reverse been stated with greater clarity. It can leave no doubt in our minds that Russia's determination to hold on to Eastern Europe at all costs, and regard- less of the wishes of the peoples themselves, is dictated by military as well as by economic considerations.

A two-pronged Soviet drive—economic and political—in Eastern Europe is now under way. There is nothing particularly secret about the economic drive. The Governments concerned have been for- bidden to help in working out the Marshall programme. At the same time they are being tied to the Soviet Five-Year Plan by all sorts of commercial agreements. These agreements are of two kinds. First of all there is a trade treaty between, say, Czechoslovakia and the Soviet Union, and another between Poland and the Soviet Union. Then these two separate treaties are reinforced with another treaty between Poland and Czechoslovakia. There is, in short, a network of treaties which, in a sense, is turning Eastern Europe into a sort of economic federation. Whether these treaties are in the best interests of Russia's partners is another story altogether. Some countries certainly seem to have very serious doubts. When Czecho- slovakia turned down the Anglo-French invitation to attend the Con- ference of Economic Co-operation in Paris she was offered a trade treaty with the Soviet Union instead. She is to get 200,000 tons of wheat in 1948, as well as feeding-stuffs, fertilisers, raw cotton and so on, in return for industrial goods. The Czechs themselves do not seem to be quite happy about the bargain that they have made. " When the Prime Minister returned from Moscow," wrote the newspaper Lidova Demokracie some days ago, "he lost no time

in giving the joyous news of the Soviet promise to deliver 20,000 tons of cotton in 1948. But the method of payment adopted hitherto means that our home consumers must not expect too much. In addition, it should not be forgotten that Russian cotton is of rela- tively poor quality. . . . We have not the least intention of dis- guising the fact that our loyalty as Allies of the Soviet Union entails certain disadvantages for us." But, adds the paper, " by not attend- ing the Paris talks, the Czechoslovak Government is not renouncing the possibility of political and economic co-operation with the other European countries, and especially with the so-called Western countries."

There is a striking note of regret, of resignation almost, in this comment. Like the French, the Czechs are putting security before economic prosperity. The French want prosperity, but not at the price of a revived German steel industry. The Czechs want pros- perity, but not at the price of losing Soviet military protection. Like the French, the Czechs are still acutely conscious of the German danger. They believe that Russia is the only big power which takes a realistic view of this danger, and that she is the only country able to give swift and decisive help in the hour of need. So they turned their eyes away from what was going on beyond the Eastern fence and decided to remain within the Russian preference system. Elsewhere in Eastern Europe Soviet economic methods are much the same, although far less pressure is required in those countries where Soviet control is already greater. Their effect is to prevent the restoration of normal political and economic relations between Eastern and Western Europe.

The Soviet political drive is at least as important as its economic. Indeed, it is probably true that without political pressure the Soviet Government would have found it very difficult, perhaps im- possible, to get the economic results that have already been achieved. First of all, there is this business of holding up the ratification of the peace treaties with the five former German satellites. The Four Powers had agreed upon simultaneous ratification. The Soviet Government has now decided not to ratify them until the satellites have done so. This seems to mean that if, say, Bulgaria refuses to ratify, ratification of all the five treaties will be held up. The result of that would be that the Soviet Government would have the right to keep its troops in Hungary, Rumania and Bulgaria. Non- ratification, in fact, gives it a sort of double guarantee. For so long as the Austrian Treaty remains in the air the Soviet Govern- ment has the right to retain its forces in Rumania and Hungary any way—regardless of the peace treaties. These forces are required to guard Red Army communications with Austria. All Mr. Bevin's efforts to persuade M. Molotov to agree to alternative communication lines have failed. Yet Mr. Bevin himself set a very good example by agreeing to use the British and American zones of Germany, instead of Italy, as lines of communication into Austria. So the British withdrawal from Italy will be complete, once the Italian Treaty is ratified. It is difficult to resist the conclusion that the Soviet Govern- ment is determined to maintain adequate military forces in Eastern Europe until it has made sure that the Governments in Sofia, Bucharest and Budapest can keep themselves permanently in power by their own unaided efforts.

In the meantime, the political purge has been speeded up, and has gained added vigour since the Marshall speech. The removal of M. Nagy, the Hungarian Prime Minister, has been followed by in- creasingly violent attacks upon the opposition. In Rumania the Peasant Party, which was the dominant political party and the only one capable of offering serious resistance to Russian encroachments, is being steadily liquidated ; only the other day four leading mem- bers of the party were arrested on the ground that they were trying to leave the country without permission. In Bulgaria the Agrarian Party is being broken up, and when that process is complete the Communist Party will be in unchallenged—perhaps unchallengeable —control. At the same time, Communists or " reliable " friends are being put into key positions in the various Ministries, so that even if there were changes in the top levels at the Ministry of the Interior —or Defence—or Education—the Communists would be certain of retaining their hold upon the country. Even in Poland a new drive against Right-wing Socialists is now under way. The first effect of the Marshall Plan, in short, has been a notable increase in political tension in Eastern Europe. That makes it all the more necessary that Western Europe should make a success of the Paris Conference.