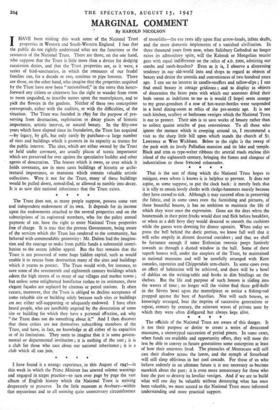 IHAVE been visiting this week some of the National Trust properties in Western and South-Western England. I fear that the public do not rightly understand what are the functions or the resources of the National Trust. There are those, on the one hand, who suppose that the Trust is little more than a device for dodging succession duties, and that the Trust properties are, as it were, a series of bird-sanctuaries, in which the remnants of our feudal families can, for a decade or two, continue to pipe laments. There are those, on the other hand, who imagine that the properties acquired by the Tiust have now been "nationalised," in the sense that hence- forward any citizen or citizeness has the right to wander from room to room unguided, to inscribe names upon the mantelpieces, and to pick the flowers in the gardens. Neither of these two conceptions corresponds, either with the realities, or with the difficulties, of the situation. The Trust was founded in 1895 for the purpose of pre- serving from destruction, exploitation or decay places of historic importance, artistic interest, or natural beauty. In the fifty-two years which have elapsed since its foundation, the Trust has acquired —by legacy, by gift, but only rarely by purchase—a large number of sites and buildings which it protects in its capacity as trustee for the public interest. The sites, which are either owned by the Trust or held under covenant, are usually places of scenic importance which are preserved for ever against the speculative builder and other agents of desecration. The houses which it owns, or over which it bolds covenants, are in most cases buildings of historic or archi- tectural importance, or mansions which contain valuable artistic collections. Were it not for the Trust, many of these buildings would be pulled down, remodelled, or allowed to tumble into decay. It is to save this national inheritance that the Trust exists.

* * * * The Trust does not, as many people suppose, possess some vast and independent endowment of its own. It depends for its income upon the endowments attached to the several properties and on the subscriptions of its registered members, who for the paltry annual payment of los. have the right to enter National Trust properties free of charge. It is true that the present Government, being aware of the services which the Trust has rendered to the community, has behaved with commendable generosity: Mr. Dalton had the imagina- tion and the courage to make from public funds a substantial contri- bution to the recent jubilee appeal. But the fact remains that the Trust is not possessed of some huge hidden capital, such as would enable it to rescue from destruction many of the sites and buildings which it yearns to protect. The Trust would wish, for instance, to save some of the seventeenth and eighteenth century buildings which adorn the high streets of so many of our villages and market towns ; but unless some enlightened benefactor rushes to its assistance, these elegant facades are replaced by cinemas or petrol stations. It often occurs, moreover, that the Trust is obliged to decline acceptance of some valuable site or building solely because such sites or buildings are not either self-supporting or adequately endowed. I have often heard people, who are justifiably angered by the desecration of some site or building for which they have a personal affection, ask why " the Trust does not do something about it:" And I then discover that these critics are not themselves subscribing members of the Trust, and have, in fact, no knowledge at all either of its capacities or of its limitations. They seem to imagine that it is some govern- mental or departmental institution ; it is nothing of the sort ; it is a club for those who care about our national inheritance ; it is a club which all can join.

* * * * I have found it a strange experience, in this August of 1947—in this week in which the Prime Minister has uttered solemn warnings and engaged in target practice—to turn over page by page the vast album of English history which the National Trust is striving desperately to preserve. In the little museum at Avebury—within that mysterious and to all seeming quite unnecessary circumference

of monoliths—the eye rests idly upon flint arrow-heads, infant skulls, and the more domestic implements of a vanished civilisation. In three thousand years from now, when Salisbury Cathedral no longer raises its admonitory spire, will the Kalmuk or Mongolian tourist gaze with equal indifference on the relics of A.D. 2000, admiring our combs and tooth-brushes? Even as it is, I observe a. distressing tendency in our old-world inns and shops to regard as objects of beauty and desire the utensils and conveniences of two hundred years ago. I can see no interest in candle-snuffers and tallow-dips ; I can find small beauty in cottage gridirons ; and to display as objects of decoration the brass pans with which our ancestors dried their beds seems as indelicate to me as it would (I hope) seem strange to my great-grandson if a row of hot-water-bottles were suspended

in a hotel dining-room as relics of the pre-atomic age. It is not such kitchen, scullery or bathroom vestiges which the National Trust is out to protect. Their aim is to save works of beauty rather than to collect quaint articles of past convenience. To all those who ignore the menace which is creeping around us, I recommend a visit to the sharp little hill upon which stands the church of St.

Lawrence at West Wickham. Below to the right is the sweep of the park with its lovely Palladian mansion and its lake and temple. Black and trim as type-writer ribbons the arterial roads enclose this island of the eighteenth century, bringing the fumes and clangour of industrialism to those frescoed colonnades.

* * * * That is the sort of thing which the National Trust hopes to mitigate, even where it knows it is helpless to prevent. It does not aspire, as some suppose, to put the clock back: it merely feels that it is silly to smash lovely clocks with sledge-hammers merely because they have ceased to tick. Although it may succeed often in preserving the fabric, and in some cases even the furnishing and pictures, of these beautiful houses, it has no ambition to maintain the life of which they were once the expression. Gone are the dayi when the housemaids in their print frocks would dust and flick before breakfast, or when as a deft bevy they would descend to smooth the cushions while the guests were dressing for dinner upstairs. When today we press the bell behind the doric portico, we know full well that it will echo emptily in distant deserted corridors ; and that we shall be fortunate enough if some Esthonian tweenie peeps furtively towards us through a dusted window in the hall. Some of these superb houses will, under the auspices of the Trust, be maintained as national museums and will be tastefully arranged with Kent- consoles, tapestries and Chippendale arm-chairs. In some cases even an effect of habitation will be achieved, and there will be a bowl of dahlias on the writing-table and books in dim bindings on the shelves. But the life and purpose of such houses is sliding into the wastes of time ; no longer will the visitor find three golf-balls in the Sevres bowl upon the mantelpiece or notice a fishing-rod propped against the bust of Aurelian. Nor will such houses, so knowingly arranged, bear the imprint of successive generations or repeat, century by century, the reiterant waves of private taste by which they were often disfigured but always kept alive. * * * * The officials of the National Trust are aware of this danger. It is not their purpose or desire to create a series of desiccated museums, a stereotyped succession of period pieces. In some cases, when funds are available and opportunity offers, they will none the less be able to convey to future generations some conception at least of how their ancestors lived. The pinnacles of Montacute will still cast their shadow across the lawns, and the nymph of Stourhead will still sleep oblivious in her cool cascade. For those of us who believe ardently in an ultimate future it is not necessary to become mawkish about the past : it is even more unnecessary for those who hate the past to destroy its lovelier vestiges. And if we are to build what will one day be valuable without destroying what has once been valuable, we must accord to the National Trust more informed understanding and more practical support.