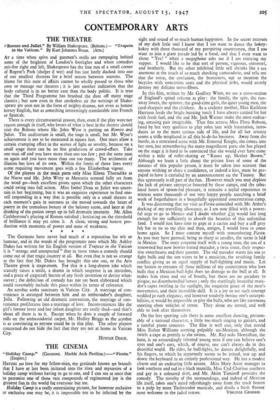 AT a time when spivs and gunmen's molls are rampaging behind some of the brightest of London's footlights and when comedies mis-fire right and left, Shakespeare has the free run of a small corner of Regent's Park (shelter if wet) and has just lately ducked into one of our smallest theatres for a brief season between seasons. The blame for this state of affairs cannot be wholly passed to those who own or manage our theatres ; it is just another indication that the body cultural is in no better case than the body politic. It is true that the Third Programme has brushed the dust off many stage classics ; but now even in that smokeless air the writings of Shake- speare are seen not in the form of mighty dramas, not even as honest kersey English, but as something interestingly translatable into French or Spanish.

There is every circumstantial reason, then, even if the play were not reason enough in itself, why lovers of what is best in the theatre should visit the Bolton where Mr. John Wyse is putting on Romeo and 7uliet. The auditoritm is small, the stage is small, but Mr. Wyse's achievement is not to be measured in square feet. One must allow a certain cramping effect in the scenes of fight or revelry, because on a small stage there can be no fine gradations of crowd-effect. Take one man off and you have more than one too few ; put the same man on again and you have more than one too many. The arithmetic of illusion has laws of its own. Within the limits of those laws every scene requiring movement goes with a fine Elizabethan vigour.

Of the players in the main parts only Miss Eileen "I'homdike as the Nurse and Mr. John Witty as Mercutio seemed fully set from the word go—both excellent pivots upon which the other characters could swing into full action. Miss Isobel Dean as Juliet was uncer- tain in her beginning, but it was an exquisite experience to find one- self responding in a way that is possible only in a small theatre to each moment's gain in sureness as she moved towards the heart of poetry in the tremulous beauty of the balcony scene, and later at the drinking of the potion swept up to full dramatic intensity. Mr. Allan Cuthbertson's playing of Romeo satisfied ; hesitating on the threshold of brilliance it may yet cross it. A clean, strong and honest pro- duction with moments of power and none of weakness.

The Germans have never had much of a reputation for wit or humour, and in the words of the programme note which Mr. Ashley Dukes has written for his English version of Trapeze in the Vatican it is " strange and unexpected " that in these times a comedy should come out of that tragic country at all. But even that is not so strange as the fact that Mr. Dukes has brought this one out, or the Arts Theatre given it stage-room. For this is a long-drawn joke which scarcely raises a smile, a drama in which suspense is an intrusion, and a piece of stagecraft barren of any fresh invention or device what-. soever ; the definition of comedy has not yet been elaborated which could reasonably include this piece within its terms of reference.

An acrobat seeks sanctuary in Vatican City. A marriage of con- venience is arranged between him and an ambassador's daughter, Julia.. Following an old dramatic convention, the marriage of con- venience proliferates into a marriage of love. Inconveniences like the girl's former lover and her infant daughter are easily shed—and that's about all there is to it. Except when he does a couple of forward rolls on the ambassadorial carpet, Mr. Hedley Briggs as the acrobat is as convincing as anyone could be in this play. The other players concerned do not hide the fact that they are not at home in Vatican City.