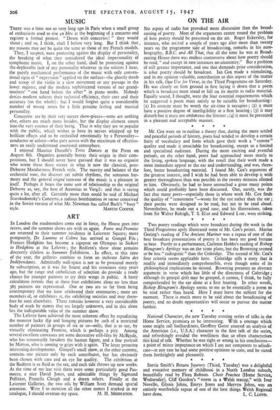 No aspect of radio has provoked more discussion than the broad- casting of poetry. Most of the arguments centre round the problem of how poetry should be presented on the air. Roger Eckersley, for instance, who retired a couple of years ago after more than twenty years on the programme side of broadcasting, remarks in his auto- biography, B.B.C. and All That, that all the time he was at Broad- casting House there was endless controversy about how poetry should be read, " and except in rare instances no unanimity." But a problem of still greater importance, and one that demands prior consideration, is what poetry should be broadcast. Ian Cox made a stimulating, and in my opinion valuable, contribution to this aspect of the matter in his talk, One Use for Verse, in the Third Programme on Saturday. He was clearly on firm ground in first laying it down that a poem which is broadcast must stand or fall on its merits as radio material. Equally sound, I thought, were the four essential requirements which he suggested a poem must satisfy to be suitable for broadcasting: (i) Its content must be worth the air-time it occupies ; (2) it must have a positive degree of intelligibility at a first hearing ; (3) it may disturb but it must not embarrass the listener ; (4) it must be presented in a pleasant and acceptable manner.

Mr. Cox went on to outline a theory that, during the more settled and peaceful periods of history, poets had tended to develop a certain fixity of vocabulary and form which gave their work a "remote" quality and made it unsuitable for broadcasting, except to a limited and specialised audience. During the more exciting and eventful periods, on the other hand, poets had approached more nearly to the living, spoken language, with the result that their work made a more immediate appeal to the ear and understanding, and was, there- fore, better broadcasting material. I found Mr. Cox's argument of the greatest interest, and I wish he had been able to develop it with greater thoroughness than was possible in the twenty minutes allotted to him. Obviously, he had to leave untouched a great many points which could profitably have been discussed. One, surely, was the fact that many poets—especially those in whose work Mr. Cox finds the quality of "remoteness "—wrote for the eye rather than the ear ; their poems were designed to be read, but not to be read aloud. Nevertheless, he made out a good case, and his illustrations, taken from Sir Walter Raleigh, T. S. Eliot and Edward Lear, were striking.

Two poetry readingg which were broadcast during the week in the Third Programme aptly illustrated some of Mr. Cox's points. Marius Goring's reading of The Ancient Mariner was a repeat of one of the best broadcast presentations of poetry it has been my good fortune to hear. Purely as a performance, Carleton Hobbs's reading of Bishop Blougram's Apology was on the same plane, but the Browning seemed to be less " radiogenic " than the Coleridge. The second of Mr. Cox's four criteria seems applicable here. Coleridge tells a story that is readily and immediately comprehensible, even though some of its philosophical implications be missed. Browning presents an abstract argument in verse which has little of the directness of Coleridge ; although its general drift may be grasped, it cannot,- I think, be fully comprehended by the ear alone at a first hearing. In other words, Bishop Blougram's Apology seems to me to be essentially a poem to be read rather than heard. Here I must leave the subject for the moment. There is much more to be said about the broadcasting of poetry, and no doubt opportunities will occur to pursue the matter further.

* * * * National Character, the new Tuesday evening series of talks in the Home Service, promise.) to be interesting. With a courage which some might call foolhardiness, Geoffrey Gorer essayed an analysis of the American (i.e., U.S.A.) character in the first talk of the series, and refreshingly avoided the woolliness that so often characterises this kind of talk. Whether he was right or wrong in his conclusions— a point of minor importance on which I am not competent to adjudi- cate—at any rate he had some positive opinions to state, and he stated them forthrightly and pleasantly.