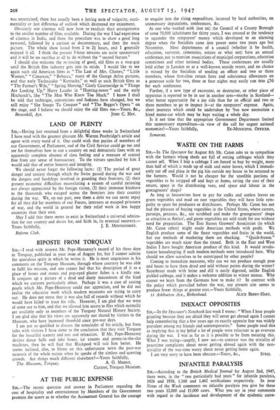 Snt,—Having just returned from a delightful three weeks in Switzerland I have read with the greatest pleasure Mr. Warren Postbridge's article and agree with every word of it. One could wish that parties of members of our Government, of Parliament, and of the Civil Service could go too and see for themselves how to run a country on real democratic lines with an apparently complete absence of class feeling and a measure of control free from any sense of bureaucracy. To the virtues specified by him I would add that of entire honesty and integrity.

We should never forget the following facts: (1) The period of great danger and anxiety through which the Swiss passed during the war and the dangers and hardships involved in guarding their frontiers, (2) their present economic difficulties necessitating a system of careful rationing not always appreciated by the foreign visitor, (3) their immense kindness to the thousands who escaped across the frontiers into their country during the war. We, on our part, owe them a debt we can never repay for all they did for members of our Forces, internees or escaped prisoners of war, and the world in general for their relief work in less happy countries than their own.

May I add that there seems to exist in Switzerland a universal admira- tion for our country and desire for, and faith in, its eventual recovery.—