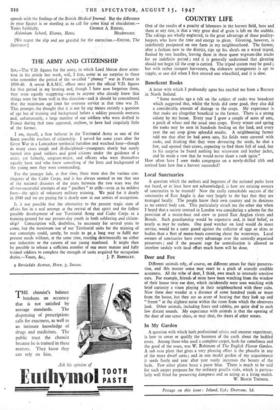 Page 18, 15 August 1947 — Local Sanctuaries A question which the authors and begetters of
Close

Local Sanctuaries A question which the authors and begetters of

the national parks have not faced, or at least have not acknowledged, is how are existing owners of sanctuaries to be treated? Now the really remarkable success of the 7 sanctuaries of East Anglia is due very largely to the fact that they are managed locally. The people know their own country and its denizens as no central body can. This particularly struck me the other day when Ibeard that a society centred in London was.considering a scheme-for-the provision of a motor-boat and crew to patrol East Anglian rivers and Broads. Such guardianship would be expensive and, in lotal belief, as nearly as may be useless. One good watcher on land would do more service, would be a surer guard against the collector of eggs or skins or bodies than a fleet of motor-boats careering about the waterways. Local owners of sanctuaries have every advantage over the centrally organised preservers ; and if the present rage for centralisation is allowed to interfere unduly with local effort much harm will be done.