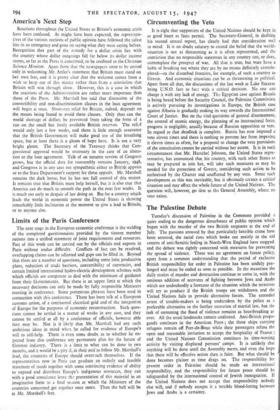 Reactions throughout the United States to Britain's economic crisis have been confused. As might have been expected, the representa- tives of the various sections of public opinion have followed the safest line in an emergency and gone on saying what they were saying before. Recognition that part of the remedy for a dollar crisis lies with

the country whose dollar outgoings fall far below its dollar income seems, so far as the Press is concerned, to be confined to the Christian Science Monitor. Apart from that the newspapers seem to be united only in welcoming Mr. Attlee's statement that Britain must stand on her own feet, and it is pretty clear that the welcome comes from a

wish to keep out of this matter rather than from a conviction that Britain will win through alone. However, this is a case in which the reactions of the Administration are rather more important than those of the Press. Mr. Marshall has said that discussion of the convertibility and non-discrimination clauses in the loan agreement will begin at once. Short-run relief for Britain, indeed, depends on the means being found to avoid these clauses. Only thus can the world shortage of dollars be prevented from taking. the form of a run on the small but freely available British reserves. The relief would only last a few weeks, and there is little enough assurance that the British Government will make good use of the breathing space, but at least there is a gleam of hope here. It is not a very bright gleam. The Secretary of the Treasury thinks that Con- gressional approval would be necessary in the case of an altera- tion to the loan agreement. Talk of an autumn session of Congress grows, but the official date for reassembly remains January, 1948, and Congress is in any case not sympathetic either to British appeals or to the State Department's support for those appeals. Mr. Marshall remains the dark horse, but he has not full control of this matter. It remains true that Britain must help herself, but it is also true that America can do much to smooth the path in the next few weeks. It is much too early to despair of her doing so. But for a country which leads the world in economic power the United States is showing remarkably little inclination at the moment to give a lead to Britain, or to anyone else.