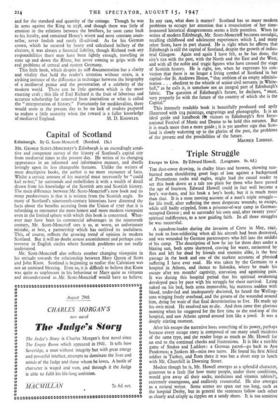 MR. GEORGE SCOTT-MoNcatEFF's Edinburgh is an exceedingly sensi- tive and competent survey of the history of Scotland's capital city from mediaeval times to the present day. He writes of its changing appearance in an informed and informative manner, and dwells lovingly upon its less changeable features. Unlike the writers of most descriptive books, the author is no mere recounter of facts. Whilst a certain amount of his material must necessarily be " cauld kail re-het," he surrounds and embellishes it with a wealth of detail drawn from his knowledge of the Scottish arts and Scottish history. The main difference between Mr. Scott-Moncrieff's new book and its many predecessors is that it is written from the Scottish angle. So many of Scotland's nineteenth-century historians have distorted the facts about the benefits accruing from the Union of 1707 that it is refreshing to encounter the more honest and more modern viewpoint even in the limited sphere with which this book is concerned. What- ever may have been its commercial advantages in the nineteenth century, Mr. Scott-Moncrieff sees it as, at worst, an unfortunate mistake, at best, a partnership which has outlived its usefulness. This, of course, reflects the growing trend of opinion in modern Scotland. But it will no doubt arouse astonishment and perhaps con- troversy in English circles where Scottish problems are not really understood.

Mr. Scott-Moncrieff also reflects another changing viewpoint in his attitude towards the relationship between Mary Queen of Scots and John Knox. Scotland is beginning to realise that Calvinism was not an unmixed blessing. Even so, it is difficult to believe that Knox was quite as unpleasant in his behaviour or Mary quite as virtuous and misunderstood as.Mr. Scott-Moncrieff would have us believe. In any case, what does it matter? Scotland has so many modern problems to occupy her attention that a resuscitation of her time- honoured historical disagreements seems a little pointless. When he writes of modern Edinburgh, Mr. Scott-Moncrieff becomes nostalgic, recalling childhood and adolesCent experiences which I, and many other Scots, have in part shared. He is right when he affirms that Edinburgh is still the capital of Scotland, despite the growth of indus- trial Glasgow. Again and again I have felt, as he has done, the city's ties with the past, with the North and the East and the West, and with all the noble and tragic figures who have crossed the stage of Scottish history. He is right, too, when he expresses his con- viction that there is no longer a living symbol of Scotland' in her capital—for St. Andrews House, " that emblem of an empty adminis- tration . . . obedient to the whistle of senior civil servants in White- hall," as he calls it, is somehow not an integral part of Edinburgh's fabric. The question of Edinburgh's future, he declares, "must, very properly lie with the future of the country of which she is the Capital." This intensely readable book is beautifully produced and aptly illustrated with 114 paintings, engravings and photographs. It is an ideal guide and handbook Air visitors to Edinburgh's first Inter- national Festival of Music and Drama to be held this autumn. But it is much more than a mere guide ; it is yet another sign that Scot- land is slowly wakening up to the glories of the past, the problems of the present and the possibilities of the future. MAURICE LINDSAY.