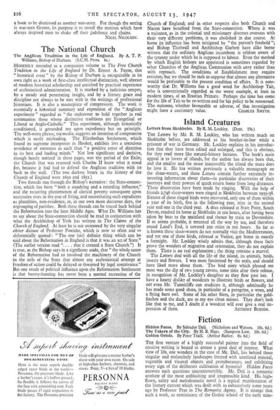 The Anglican Tradition in the Life of England. By A. T. P. Williams, Bishop of Durham. (S.C.M. Press. 6s.) MODESTLY intended as a companion volume to The Free Church Tradition in the Life of England by Dr. Ernest A. Payne, this " historical essay " by the Bishop of Durham is recognisable in its own right as a work of first-class intellectual distinction, well abreast of modern historical scholarship and enriched by practical experience of ecclesiastical administration. It is marked by a judicious temper, by a steady and penetrating insight, and by a literary grace and discipline not always to be met with in the writings of professional historians. It is also a masterpiece of compression. The work is essentially a historical summary and exposition of the " Anglican experiment " regarded as " the endeavour to hold together in real communion those whose distinctive traditions are Evangelical or Liberal or Anglo-Catholic." This experiment, although historically conditioned, is grounded not upon expediency but on principle. The well-worn phrase, via media, suggests an intention of compromise which is easily misleading. The Elizabethan Settlement, which found its supreme interpreter in Hooker, exhibits less a conscious avoidance of extremes as such than " a positive sense of direction in its best and leading minds." Not less significant and decisive, though barely noticed in these pages, was the period of the Exile; the Church that was restored with Charles II knew what it stood for, because it had had to defend the Anglican tradition with its back to the wall. (The two darkest hours in the history of the Church of England were 165o and 1851.) Two threads run through the Bishop's narrative: the State-connec- tion, which has been " both a steadying and a retarding influence," and the recurring phenomenon of clerical poverty consequent upon successive rises in the cost of living, and necessitating such expedients as pluralities, non-residence, or, in our own more decorous days, the regrouping of parishes. Both these threads can be traced back behind the Reformation into the later Middle Ages. What Dr. Williams has to say about the State-connection should be read in conjunction with what the Archbishop of York has written in The Claims of the Church of England. At least he is not overawed by the very singular obiter dictum of Professor Powicke, which is now so often and so deferentially quoted : " The one (sic) definite thing which can be said about the Reformation in England is that it was an act of State." (The earlier version read ".. . . that it created a State Church.") It is true, as the Bishop says in a significant aside, that " the whole cause of the Reformation had so involved the machinery of the Church in the toils of the State that almost any ecclesiastical attempt at freedom of action could be delayed or thwarted by legal contrivance." But one result of political influence upon the Reformation Settlement is that heresy-hunting has never been a normal recreation of the

Church of England; and in other respects also both Church and Nation have benefited from the State-connection. Where it was a nuisance, as in the colonial and missionary dioceses overseas with their very different problems, it was abolished in due course. At home its influence has been mitigated by "the parson's freehold "; and Bishop Thirlwall and Archbishop Garbeat have alike borne witness that the ordinary Anglican incumbent is seldom aware of the tyranny under which he is supposed to labour. Even the method by which English bishops are appointed is sometimes regarded by other Churches of the Anglican Communion with envy rather than with reproach. The conditions of Establishment may require revision; but we should be rash to suppose that almost any alternative would be preferable to the present condition of affairs. It is note- worthy that Dr. Williams has a good word for Archbishop Tait, who is conventionally regarded as the worst example, at least in modern times, of an Erastian Primate. Perhaps the time has come for the life of Tait to be re-written and for his policy to be reassessed. The outcome, whether favourable or adverse, of that investigation