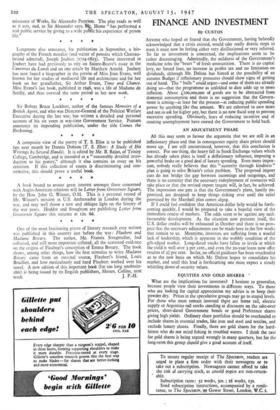 By CUSTOS ANYONE who hoped or feared that the Government, having belatedly acknowledged that a crisis existed, would take really drastic steps to meet it must now be feeling either very disillusioned or very relieved. So far as investment is concerned, the implications seem to be rather discouraging. Admittedly, the mildness of the Government's medicine robs the "bears" of fresh ammunition. There is no capital levy, no forced loan, no increase in profits tax and no limitation on dividends, although Mr. Dalton has hinted at the possibility of an autumn Budget if inflationary pressures should show signs of getting out of hand. The " bulls " could argue—and some of them are already doing so—that the programme as unfolded to date adds up to more inflation. About £200,000,000 of goods are to be abstracted from domestic consumption and there is no suggestion that the Govern- ment is aiming—at least for the present—at reducing public spending power by anything like that amount. We are exhorted to save more and not to ask for higher pay, but there is no new fiscal step to prevent excessive spending. Obviously, fears of reducing incentive and of creating unemployment have caused the Government to hold back.

AN ADJUSTMENT PHASE All this may seem to favOur the argument that we are still in an inflationary phase and that in consequence equity share prices should move up. I am still unconvinced, however, that this conclusion is correct. For one thing, the heavy fall in Stock Exchange values which has already taken place is itself a deflationary influence, imposing a powerful brake on a good deal of luxury spending. Even more impor- tant, nobody really believes that this " austerity through kindness " plan is going to solve Britain's crisis problem. The proposed import cuts do not bridge the gap between incomings and outgoings, and there is no certainty that the necessary redeployment of resources will take place or that .the revised export targets will, in fact, be achieved. The impression one gets is that the Government's plans, hastily im- provised, are designed to keep things ticking over until the relief promised by the Marshall plan comes along.

If I could feel confident that American dollar help would be forth- coming quickly, I would be pfepared to take a hopeful view of the immediate course of markets. The odds seem to be against any such favourable development. As the situation now presents itself, the U.S. dollar credits will be exhausted in October and there is no pros- pect that the necessary adjustments can be made here in the kw weeks that remain to us. Meantime, investors are suffering from a woeful lack of leadership, which is apparent in the wobbly condition of the gilt-edged market. Long-dated stocks have fallen to levels at which the yield is well over 3 per cent., and even the 20-year loans now offer returns of 2.-1 per cent. So far, no official guidance has been vouchsafed as to- the new basis on which Mr. Dalton hopes to consolidate his market, and until this lead is forthcoming one must expect a steady whittling clowriof security values.

EQUITIES AND GOLD SHARES What are the implications for investors? I hesitate to generalise, because people view their investments in different ways. To those who are looking for capital appreciation my advice is to keep their powder dry. Prices in the speculative groups may go to stupid levels. For those who must remain invested there are home rail, electric supply or Argentine rail stocks standing at discounts on the take-over prices, short-dated Government bonds or good Preference shares giving high yields. Ordinary share portfolios should be overhauled to include shares in essential trades, like iron and steel and textiles, and exclude luxury shares. Finally, there are gold shares for the hard- bitten who do not mind fishing in troubled waters. I think the case for gold shares is being argued wrongly in many quarters, but for the long-term this group should give a good account of itself.