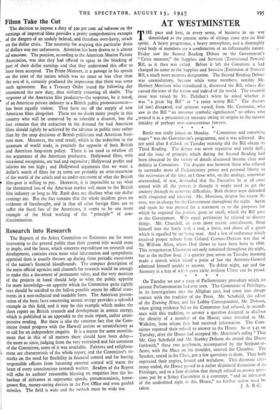 Films Take the Cut The decision to impose a duty

of 30o per cent. ad valorem on the earnings of imported films provides a pretty comprehensive example of the dangers of an unduly belated, and therefore over-hasty, attack on the dollar crisis. The necessity for stopping this particular drain of dollars was not unforeseen. Attention has been drawn to it almost ad nauseam. The position, according to the American Motion Picture Association, was that they had offered to agree to the blocking of part of their dollar earnings and that they understood this offer to have been accepted. The Prime Minister, in a passage in his speech on the state of the nation which was no more or less clear than the rest of it, certainly produced the impression that there was some such agreement. But a Treasury Order issued the following day announced the new duty, thus violently removing all doubt. The response of the American film producers—the response, be it noted, of an American private industry to a British public pronouncement— has been equally violent. They have cut off the supply of new American films altogether. There are no doubt many people in this country who will be unmoved by so tolerable a disaster, but the fact remains that the reduction in the demand for bad American films should rightly be achieved by the advance in public taste rather than by the snap decisions of British politicians and American busi- ness men. Moreover, the total result, which is the reduction in the quantum of world trade, is precisely the opposite of both British and American long-term policy. There is no need to swallow' all the arguments of the American producers. Hollywood films, with occasional exceptions, are bad and expensive ; Hollywood profits and salaries are too high ; and Hollywood arguments that we want a dollar's worth of films for 25 cents are probably an over-statement of the worth of the article and an under-statement of what the British film-goer is willing to pay. Moreover, it is impossible to say what the threatened loss of the American market will mean to the British film industry so long as Mr. Rank does not disclose what our dollar earnings are. But the fact remains that the whole incident gives no evidence of forethought, and in that all other foreign films are to suffer the fiscal fate of the Americans, it seems to be one more example of the blind working of the " principle " of non- discrimination.