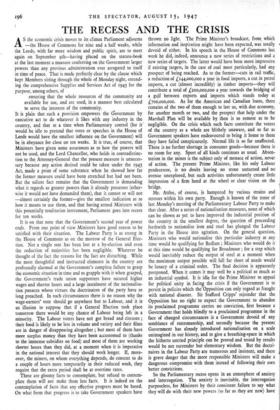 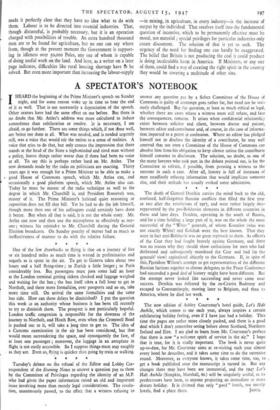 THE RECESS AND THE CRISIS

AS the economic crisis moves to its climax Parliament adjourns —the House of Commons for nine and a half weeks, while the Lords, with far more wisdom and public spirit, are to meet again on September 9th—having placed on the statute-book at the last moment a measure conferring on the Government larger powers than any previous administration ever arrogated to itself in time of peace. That is made perfectly clear by the clause which kept Members sitting through the whole of Monday night, extend- ing the comprehensive Supplies and Services Act of 1945 for the purpose, among others, of ensuring that the whole resources of the community are available for use, and are used, in a manner best calculated to serve the interests of the community. It is plain that such a provision empowers the dovernment by executive act to do whatever it likes with any industry in the country, and that at a time when Parliamentary control (for it- would be idle to pretend that votes or speeches in the House of Lords would have the smallest influence on the Government) will be in abeyance for close on ten weeks. It is true, of course, that Ministers have given some assurances as to how the powers will not be used, and the Lord Chancellor, who holds in contradistinc- tion to the. Attorney-General that the present measure is unneces- sary because any action desired could be taken under the 1945 Act, made a point of some substance when he showed how far the former measure could have been stretched but had not been. But the salient fact remains that the Government is demanding what it regards as greater powers than it already possesses (other- wise it would not have demanded them), that it cannot or will not —almost certainly the former—give the smallest indication as to how it means to use them, and that having armed Ministers with this potentially totalitarian instrument, Parliament goes into recess for ten weeks.

It is on that note that the Government's second year of power ends. From one point of view Ministers have good reason to be satisfied with their situation. The Labour Party is as strong in the House of Commons as on the morrow of the General Elec- tion. Not a single seat has been lost at a by-election and even the reduction of majorities has been negligible. Whatever be thought of the fact the reasons for the fact are disturbing. While the most thoughtful and instructed elements in the country are profoundly alarmed at the Government's complete failure to grasp the economic situation in time and to grapple with it when grasped, the Government's trade union supporters have secured higher wages and shorter hours and a large instalment of the nationalisa- tion panacea whose virtues the doctrinaires of the party have so long preached. In such circumstances there is no reason why the wage-earners' vote should go anywhere but to Labour, and it is an illusion to suppose that if a General Election took place tomorrow there would be any chance of Labour being left in a minority. The Labour voters have not got bread and circuses ; their food is likely to be less in volume and variety and their films are in danger of disappearing altogether ; but most of them have more surplus money than they have been accustomed to (thanks to the immense subsidies on food) and most of them are working shorter hours than they did, at a moment when it is imperative in the national interest that they should work longer. If, more- over, the miners, on whom everything depends, do consent to do a couple of hours more temporarily in their reduced week, they require that the extra period shall be at overtime rates.

These are gloomy facts to contemplate, but refusal to contem- plate them will not make them less facts. It is indeed on the contemplation of facts that any effective progress must be based. On what form that progress is to take Government speakers have thrown no light. The Prime Minister's broadcast, from which information and inspiration might have been expected, was totally devoid of either. In his speech in the House of Commons last week he did, indeed, announce a new series of restrictions and a new series of targets. The latter would have been more impressive if existing targets, in the case of coal most particularly, had any prospect of being reached. As to the former—cuts in rail traffic, a reduction of L144,000,000 a year in food imports, a cut in petrol imports, a cut (almost incredibly) in timber imports—they will contribute a total of £200,000,000 a year towards the bridging of a gulf between exports and imports which stands today at £700,000,000. As for the American and Canadian loans, there remains of the two of them enough to last us, with due economy, for another month or two, and the prospect that help under the Marshall Plan will be available by then is so remote as to be negligible. On the crisis which such facts constitute the voters of the country as a whole are blithely unaware, and so far as Government speakers have endeavoured to bring it home to them they have failed conspicuously. Normal life is so far unaffected. There is no further shortage in consumer goods—because there is no room for any. Sport of all kinds continues as usual. Absen- teeism in the mines is the subject only of menace of action, never of action. The present Prime Minister, like his only Labour predecessor, is no doubt leaving no stone unturned and no avenue unexplored, but such activities unfortunately create little impression of a firm hand at the wheel or clear vision on the bridge.

Mr. Attlee, of course, is hampered by various strains and stresses within his own party. Enough is known of the tenor of last Monday's meeting of the Parliamentary Labour Party to make that clear. After a series of nationalisation measures, none of which can be shown as yet to have improved the industrial position of the country in the smallest degree, the question of proceeding forthwith to nationalise iron and steel has plunged the Labour Party in the House into agitation. On the general question, Ministers who would nationalise this particular industry at any time would be qualifying for Bedlam ; Ministers who would do it at this time would be qualifying for Broadmoor ; for a step which would inevitably reduce the output of steel at a moment when the.maximum output possible will fall far short of needs would be lunacy of a criminal order. The final decision is apparently postponed. When it comes it may well be a political as much as an industrial symbol. It is idle for the Prime Minister to appeal for political unity in facing the crisis if the Government is to persist in policies which the-Opposition can only regard as fraught with national disaster. Sir Stafford Cripps' rejoinder that the Opposition has no right to expect the Government to abandon its proclaimed programme carries no conviction, first because a Government that holds blindly to a proclaimed programme in the face of changed circumstances is a Government devoid of any semblance of statesmanship, and secondly because the present Government has already introduced nationalisation on a scale unimagined in our history, and to give a breathing-space in which the hitherto untried principle can be proved and tested by results would be not surrender but elementary wisdom. But the doctri- naires in the Labour Party are numerous and insistent, and there is grave danger that the more responsible Ministers will make a dangerous compromise with them instead of following their own better convictions.

So the Parliamentary recess opens in an atmosphere of anxiety and interrogation. The anxiety is inevitable, the interrogation purposeless, for Ministers by their consistent failure to say what they will do with their new powers (so far as they are new) have made it perfectly clear that they have no idea what to do with them. Labour is to be directed into essential industries. -That, though distasteful, is probably necessary, but it is an operation charged with possibilities of trouble. An extra hundred thousand men are to be found for agriculture, but no one can say where from, though at the present moment the Government is support- ing in idleness over 5o,000 Poles, any one of whom is capable of doing useful work on the land. And here, as a writer on a later page indicates, difficulties like rural housing shortage have fb be solved. But even more important than increasing the labour-supply —in mining, in agriculture, in every industry—is the increase of output by the individual. That resolves itself into the fundamental question of incentive, which to be permanently effective must be moral, not material ; special privileges for particular industries only create discontent. The solution of that is yet to seek. The urgency of the need for finding one can hardly be exaggerated. The belief that Britain is not producing the coal it could produce is doing incalculable harm in America. If Ministers, or any one of them, could find a way of creating the right spirit in the country they would be covering a multitude of other sins.