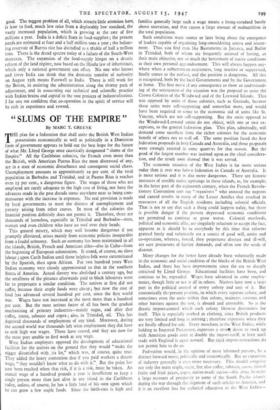 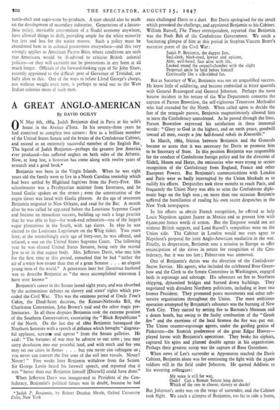 THE plan for a federation that shall unite the British West Indian possessions economically as well as politically in a Dominion form of government appears to hold out the best hope for the future of what Mr. Lloyd George once caustically designated " slums of the Empire." All the Caribbean colonies, the French even more than the British, with American Puerto Rico the most distressed of any, are in a state of economic disturbance and consequent social chaos. Unemployment amounts to approximately to per cent. of the total population in Barbados and Trinidad, and in Puerto Rico it reaches even 15 per cent., a dangerous figure. The wages of those who are employed are rarely adequate to the high cost of living, nor have the advances made in the past decade come anywhere near to being com- mensurate with the increase in expenses. No real provision is made by local governments to meet the distress of unemployment and poverty arising from other causes. In most of the colonies the financial position definitely does not permit it. Therefore, there are thousands of homeless, especially in Trinidad and Barbados—men, women and even children who have no roof over their heads.

This general misery, which may well become dangerous if not promptly alleviated, arises mainly from economic policies inseparable from a feudal ecbnomy. Such an economy has been maintained in all the islands, British, French and American alike—also in Cuba—from the beginning of European colonisation. It rested, of course, on slave labour ; upon Carib Indian until these helpless folk were exterminated by the Spanish, then upon African. For two hundred years West Indian economy very closely approximated to that in the southern States of America. Actual slavery was abolished a century ago, but the smallness of the pittance afterwards paid to black labourers went far to perpetuate a similar condition. The natives at first did not suffer, because their staple foods were cheap ; but now the cost of food has advanced several hundred per cent. since the first world war. Wages have not increased at the most more than a hundred per cent. But the most serious factor of all has been the gradual mechanising of primary industries—mainly sugar, and after that coffee, cocoa, tobacco and copra ; also, in Trinidad, oil. This has deprived thousands of employment of any kind. Moreover, during the second world war thousands left what employment they did have to seek high war wages. Those have ceased, and they are now for the most part unable to find work at any wage.

West Indian employers opposed the development of educational facilities for the natives on the ground that they would "make the nigger dissatisfied with ,:tis lot," which was, of course, quite true. They added the hoary contention that if you paid workers a decent wage, " they wouldn't know what to do with it.". But the point has now been reached when that risk, if it is a risk, must betaken. An annual wage of a hundred pounds a year is insufficient to keep a single person more than just alive in any island in the Caribbean today, unless, of course, he has a little land of his own upon which he can grow a few staple foods. Since the birth-rate is high and

families generally large such a wage means a living-standard barely above starvation, and that causes a large amount of malnutrition in the total population.

Such conditions must sooner or later bring about the emergence of leaders capable of organising long-smouldering unrest and resent- ment. Thus you find men like Bustamente in Jamaica, and Butler in Trinidad, both of whom are frequently accused of having, as their main objective, not so much the betterment of native conditions as their own personal aggrandisement. This will always happen any- where when a subterranean restiveness, long inactive or suppressed, finally comes to the surface, and the position is dangerous. All this is recognised, both by the local Governments and by the Government at home. The first move of any consequence to show an understand- ing of the seriousness of the situation was the proposal to unite the Crown Colonies of the Windward and of the Leeward Islands. This was opposed by units of those colonies, such as Grenada, because these units were self-supporting and somewhat more, and would have been required to come to the economic aid of units like St. Vincent, which are not self-supporting. But the units opposed to the Windward-Leeward union do not object, with one or two ex- ceptions, to the general federation plan. This plan, admittedly, will demand some sacrifices from the richer colonies for the economic benefit of others not so well off. The same position faced the first federation proposals in both Canada and Australia, and those proposals • were strongly resisted in some quarters for that reason. But the good of the largest number was insisted upon as the chief considera- tion, and the result soon showed that it was served.

The economic situation of the West Indies is far more serious today than it ever was befo-e federation in Canada or Australia. It is more serious and it is also more dangerous. There are historic instances of terrible native uprisings in these islands, as, for example, in the latter part of the eighteenth century, when the French Revolu- tionary Convention sent out " organisers " who aroused the negroes and caused revolts in many of the Lesser Antilles that resulted in massacres of all the English residents including colonial officials. That is not to say that such a thing could happen today, but there is possible danger if the present depressed economic conditions are permitted to continue or grow worse. Colonial overlords, political and economic alike, are singularly reluctant to accept the fact, apparent as it should be to everybody by this time that reforms granted freely and voluntarily are a source of good will, amity and co-operation, whereas, forced, they perpetuate distrust and ill-will, are sure precursors of further demands, and often sow the seeds of disaster.

Many changes for the better have already been voluntarily made in the economic and social condition of the blacks of the British West Indies, and there has been improvement since the era so sharply criticised by Lloyd George. Educational facilities have been, and continue to be, expanded. Wages have advanced in some employ- ments, though little or not at all in others. Natives have now a large part in the political control of every colony and unit of it. But economically the present position, in which every separate colony, and sometimes even the units within that colony, maintain customs and other barriers against the rest, is absurd and untenable. So is the drastic import-control which each colony likewise determines for itself. This is especially marked in clothing, since British products are very limited and long in arriving ; therefore expensive when they are finally offered for sale. Every merchant in the West Indies, while holding to Imperial Preference, expresses a strong desire to stock up with American goods even at double the import-tariff, at least until trade with England is again normal. But rigid import-restrictions do not permit him to do so.

Federation would, in the opinion of most informed persons, he a distinct forward move, politically and economically. But an expansion of industry generally is even more necessary. This should comprise not only the main staple, sugar, but also coffee, tobacco, cocoa, tinned fruits and fruit juices, copra, native-made curios—this alone brought a large measure of prosperity to some of the South Pacific islands during the war through the shipment of such articles to America, and it is an excellent line for technical education in the West Indies- turtle-shell and sugar-cane by-products. A start should also be made on the development of secondary industries. Generations of a laissez- faire policy, inevitable concomitant of a f/eudal economy anywhere, have allowed things to drift, providing ample for the white minority but less and less for the native masses. Such a policy must be abandoned here as in colomal possessions everywhere—and this very strongly applies to American Puerto Rico, where conditions are such that Americans would be ill-advised to criticise British colonial policies--or they will certainly not be possessions in any form at all much longer. Officials of the forward-looking type of Sir John Shaw, recently appointed to the difficult. post of Governor of Trinidad, are fully alive to this. One of the ways to refute Lloyd George's charge, not without weight even now, is perhaps to send out to the West Indian colonies more of such men.