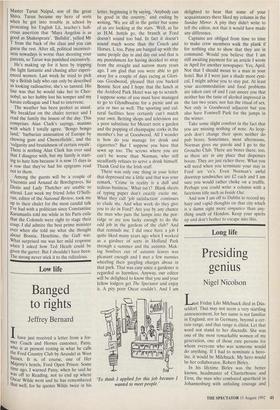 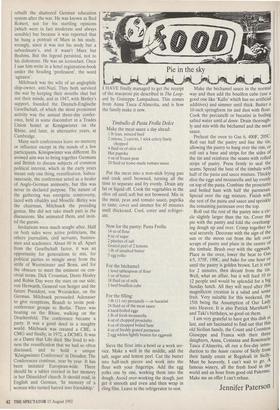 Last Friday Lilo Milchsack died in Dils- seldorf. That may not seem a very startling announcement, for her name is not familiar in England, nor in Germany, beyond a cer- tain range, and that range is elitist. Let that word not stand to her discredit. She was one of the most remarkable women of my generation, one of those rare persons for whom everyone who was someone would do anything. If I had to nominate a hero- ine, it would be Milchsack. My hero would be her collaborator, Robert Birley.

In his lifetime Birley was the better known, headmaster of Charterhouse and Eton, the man who combated apartheid in Johannesburg with unfailing courage and rebuilt the shattered German education system after the war. He was known as Red Robert, not for his startling opinions (which were in fact moderate and always sensible) but because it was reported that he hung a portrait of Marx in his study, wrongly, since it was not his study but a subordinate's, and it wasn't Marx but Brahms. But the legend persisted, not to his dishonour. He was an iconoclast. Once I saw him write in a hotel registration-book under the heading 'profession', the word 'agitator'.

Milchsack was the wife of an anglophile ship-owner, anti-Nazi. They both survived the war by keeping their mouths shut but not their minds, and in 1947, with Birtley's support, founded the Deutsch-Englische Gesellschaft, of which the most prominent activity was the annual three-day confer- ence, held in some discomfort in a Trades Union hostel at Konigswinter on the Rhine, and later, in alternative years, at Cambridge.

Many such conferences leave no memory or influence except in the minds of a few participants. K6nigswinter was different. Its avowed aim was to bring together Germans and British to discuss subjects of common political interest, which in the early years meant only one thing, reunification. Subcu- taneously, the conference acted as a healer of Anglo-German animosity, but this was never its declared purpose. The nature of the gathering was energetic controversy, laced with ribaldry and Moselle. Birley was the chairman, Milchsack the presiding genius. She did not take much part in the discussions. She animated them, and invit- ed the guests.

Invitations were much sought after. Half on both sides were active politicians, the others journalists, civil servants, busines- men and academics. About 60 in all. Apart from the Gesellschaft factor, it was an opportunity for generations to mix, for political parties to mingle away from the strife of Westminster and Bonn, and for the obscure to meet the eminent on con- vivial terms. Dick Crossman, Denis Healey and Robin Day were the stars on our side; von Herwarth, General von Senger and the future President, von Weizsacker, on the German. Milchsack persuaded Adenauer to give receptions, Brandt to invite post- conference groups to Berlin. There was boating on the Rhine, walking on the Drachenfeld. The conference became a party. It was a good deed in a naughty world. Milchsack was created a CBE, a CMG and finally, in 1972, a DCMG. It was as a Dame that Lilo died. She lived to wit- ness the reunification that we had so often discussed, and to hold a unique `Konigswinter Conference' in Dresden. The Conferences continue, year by year. It has been imitated European-wide. There should be a tablet erected in her memory in her Dusseldorf church. It should read, in English and German, 'In memory of a woman who turned hatred into friendship.'