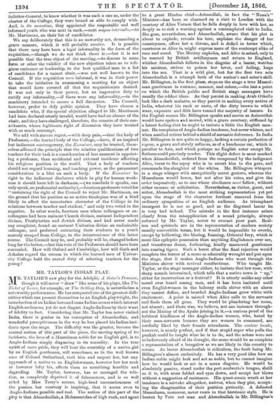 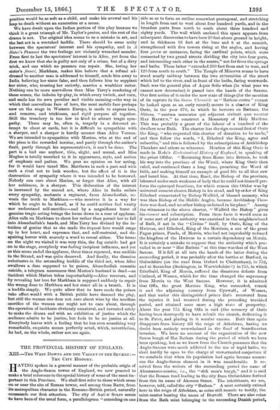 R. TAYLOR'S new play for the Adelphi, A Sister's Penance, 1-T-1- though it will never " draw " like some of his plays, like The Ticket of Leave, for example, or The Sealing Day, is nevertheless a noteworthyperformance. He has conquered one of the greatest diffi- culties which can present themselves to an English playwright, the introduction of an Indian hero and some Indian scenes which interest English audiences, yet do not disgust Anglo-Indians by their want of fidelity to fact. Considering that Mr. Taylor has never visited India, there is genius in his conception of Ahmedoollah, and wonderful perceptiveness in the way he has placed his Indian inci- dents upon the stage. The diffitatlty was the greater, because the central notion of this part of the piece, the moving spring of its incidents, the love of a Muasulman noble for an English girl, is to _Anglo-Indians simply disgusting in its unreality. In the true spirit of caste pride, they will bear the courtship of a native girl by an English gentleman, will sometimes, as in the well known -case of Colonel Sutherland, visit him and respect her, but any approach of a native to an Englishwoman, however low her rank or however lofty his, affects them as something horrible and _degrading. Mr. Taylor, however, has so managed the rela- tion, so completely deprived it of fulsomeness, and is so well aided by Miss Terry's serene, high-bred unconsciousness of the passion her courtesy is inspiring, that it seems even to Anglo-Indians possible and real. The notion of this part of the play is that Ahmedoollah,a Mohammedan of high rank, and agent

to a great Hindoo chief 7-Azimoollah, in fact the " Nana's " Minister—has been so charmed on a yisit to London with the courtesy of Alice Vernon that he, falls_deeply in love with her, so deeply as to risk a -warning-against a contemplated visit to India. She goes, nevertheless, and Ahmedoollah,_ aware that his plot is about to explode, reveals his bye, %plains -the danger a her countrymen, offers her. a throne,_and is _defied, in terms which, courteous as Alice is, might express more of the contempt alike of race and creed. The Mutiny explodes, and Alice iaseized, only to be rescued by British artillerymen and return to ngland, whither Ahmedoollah follows in the disguise Jof a laacar, watches his mistress, strives to poison her lover, and failing, leaps into the sea. That is a wild plot, but for the first two acts Ahmedoollah is a triumph both of the author's and actor's skill. Mr. Billington, in the first place, stepson the stage a true Mussul- man gentleman in costume, manner, and colour,—the last a point on which the British public and British stage managers have usually the oddest ideas. As they persist in making,Arab Othello look like a dark mulatto, so they persist in making every native of India, whatever his rank or caste, of the dirty brown to which want, exposure and filth have tanned the majority of lascars. In the English scenes Mr. Billington speaks and moves as Azimoollah would have spoken and moved, with a grave courtesy, stiffened by a latent feeling that he ought to imitate a little the English man- ner. He complains of Anglo-Indian insolence, but never whines, and when assailed retires behind a shield of sarcastic deference. In India Mr. Billington is not quite so happy, -lacking a certain perfection of repose, a grave and stately softness, as of a handsome cat, which is peculiar to Asia, and which perhaps no English actor except Mr. Sothern could precisely render. This slight defect is most marked when Ahmedoollah, ordered from the compound by the indignant Alice, turns to the sepoy who is to escort him to the gate, and commands the slaughter of the whites. Mr. Billington whispers in a stage whisper with energetically secret gesture, whereas the Mussulmau would lower, but not alter his voice, and give the order impassively, as to one whose obedience must follow, without either menace or solicitation. Nevertheless, as visitor, guest, and suitor, Ahmedoollah is the most striking -representation yet put upon the stage of the character furthest removed from the ordinary sympathies of an English audience. As _triumphant insurgent he is not so good, and as the disguised lascar he is very bad indeed. The mistake in the first instance arises clearly from the misapplication of a sound principle, always enforced by Mr. Taylor, never to overact your part. Real- ism and quietude are in the representation of .modern society usually convertible terins, but it would be impossible to overdo, except by bellowing, the blazing, foaming, Oriental fury, which is more like epileptic possession than anything Englishmen ever see, and transforms donee, forbearing, kindly mannered gentlemen into roaring tigers. Such a burst after the final rejection would complete the horror of a scene so admirably wrought and put upon the stage, that it makes Anglo-Indians who went throngh the Mutinies shiver with revived recollections. 'Who taught Mr. Taylor, or the stage manager either, to imitate that low roar, with sharp sounds intermixed, which tells that a native town is "up," either for insurrection or a festival ? It is utterly unlike any other sound ever heard among men, and it has been imitated until even Englishwomen in the balcony stalls shiver with an alarm they cannot define, and bearded Anglo-Indians grow white with excitement. A point is missed when Alice calls to the servants and finds them all gone. They would be plundering her room, not absent ; and there was, we believe, not one instance through- out the Mutiny of the Ayahs joining in it,—a curious proof of the habitual kindliness of the Anglo-Indian women, who, hated by their men-servants because they are women in -command, are cordially liked by their female attendants. The conker locale, however, is nearly perfect, and if that stupid super who pulls the punkah could be taught what he is to do, and the actors were not so ludicrously afraid of its draught, the scene would be as complete a representation of a bungalow as we are likely in this country to secure. As lasear Ahmedoollah is ridiculous, the fault being Mr. Billington's almost exclusively. He has a very good idea how an Indian noble might look and act as noble, but he cannot imagine how he would look or act in a mean disguise. He would be absolutely passive, stand under the pert soubrette's tongue, shrill as it is, with arms folded_ and eyes down, and accept her blows without a suggestion of resistance. His quasi-comic wrath at her insolence is a mistake altogether, natives, when they plot, accept- ing the disagreeables of their position. patiently. A defeated Mussuhrum, moreover, never roars in that histrionic style. He is beaten by Fate not man .and A.hmedocaah in Mr. Billiegton's

position would he as softas a child, and make his avowal and his leap to death without an execration or a moan.

We have dwelt upon the Indian portion of this play because we think it a great triumph of Mr. Taylor's genius, and the rest of the drama is not. The original idea seems to us a mistake in art, and the last act is -a wretched huddle. There should be some unity between the spectators' interest and his sympathy, and in A Sister's Penance the two feelings are violently wrenched asunder. From first to last the spectators' interest is in Alice, yet from the first we know that she is guilty not only of a crime, but of a dirty trick, and one which no -penance can repair. She, loving her sister's fiancé, Markham, makes him believe that a refusal ad- dressed to another man is addressed to himself, sends him away to India believing her sister false, and then follows him to supplant ter sister, who, trusting her entirely, marries a wealthier suitor. Nothing can be more marvellous than Miss Terry's rendering- of these scenes, the infinite by-play, in which every twitch, and turn, -and smile has its own peculiar and visible meaning—the way in which that marvellous face of hers, the most mobile face perhaps now on the stage in Western Europe, is made to express lave, and remorse, and trickiness, and rigid purpose all together. .Still the treachery is too low in kind to attract tragic sym- pathy. There may be, often -is, tragedy in a detected at- tempt to cheat at cards, but it is difficult to sympathize with -a sharper, and a sharper is hardly meaner than Alice Vernon. We are intended to sympathize with Marion, who at the end of the piece is the rewarded heroine, and partly through the author's fault, partly through his representative's, it can't be done. The part is a bad one anyhow, thin, slight, and unreal, and Miss 'Hughes is totally unsuited to it in appearance, style, and notion -of emphasis and pathos. We pass no opinion on her acting, for it would have taxed Mrs. Matthews in such a part and with such a rival not to look wooden, but the effect- of it is the destruction of sympathy where it was intended to be bestowed. _Nobody can care about Marion, or forget that Alice, with all her nobleness, is a sharper. This dislocation of the interest is increased by the second act, where Alice in India enlists -every sympathy, enchants a regiment, faces Ahmedoollah, re- -weals the truth to Markham--who receives it in a way for which he ought to be hissed, as if he could neither feel vanity -nor understand self-sacrifice—and by a magnificent burst of -genuine tragic acting brings the house down in a roar of applause. Alice calls on Markham to shoot her rather than permit her to fall into Ahmedoollah's hands, and Miss Terry has divined by -the in- -tuition of genius that as she made the request, love would surge up in her heart, and expresses that, and self-restraint, and de- spairing horror with scarcely- a word to reveal either. The house .on the night we visited it was very thin, the fog outside had got -on to the stage, everybody was feeling incipient influenza, and yet -as this scene ended the applause, three times repeated, was audible in the Strand, and was quite deserved. And finally, the disunion culminates in the astounding huddle of the third act, when Alice -swallows a dose supposed to be poison, Ahmedoollah commits suicide, a telegram announces that Marion's husband is dead—an 'incident which Marion takes imperturbably—Alice recovers, and by revealing her love for Markham is supposed suddenly to repair the wrong done to Markham and her sister all in a breath. It is .a huddle simply. We quite allow that to have made the poison -take effect would- with a British public have damned the play, but still the woman one does not care about wins by the needless :sacrifice of the woman one ought not to care about, through the operation of incidents obviously unnatural, aud invented solely to make the drama end with an exhibition of justice which the Audience admits to be justice, but feels to be no justice at all. Everybody leaves with a feeling that he has seen something very remarkable, exquisite scenes perfectly acted, which, nevertheless, he had, on the whole, rather not see again.