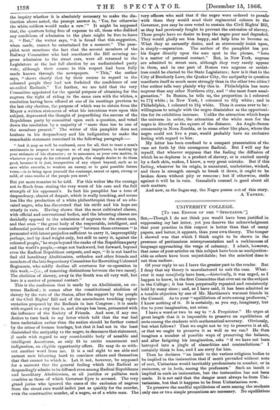 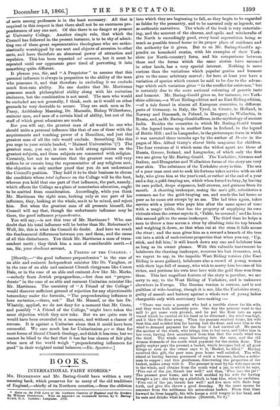 [To THE EDITOR OF THE "SPECTATOR."] SIR,—Though I do not think you would have been justified in suppressing my last letter, yet you deserve the acknowledgment that your practice in this respect is better than that of many papers, and better, it appears, than your own theory. The temper I showed was that which I think ought to be shown in the presence of pertinacious misrepresentation and a recklessness of language approaching the verge of calumny. I admit, however, that some of your articles on this subject have been as unobjection- able as others have been unjustifiable; but the mischief done is not thus undone.

Of your reply to me I leave the greater part to the reader. But I deny that my theory is manufactured to suit the case. What- ever it may manifestly have been,—historically, it was urged, as I happen to know, in the first Committee that ever sat on the subject in the College ; it has been perpetually repeated and consistently held by many since ; and, as I have said, it has been admitted as a tenable objection by one of Mr. lllartineau's warmest friends in the Council. As to your "equilibrium of sects among professors," I know nothing of it. It is certainly, as you say, imaginary, but due to your imagination, not mine.

I have a word or two to say to !, A Proprietor." He urges at great length that it is impossible to preserve an equilibrium of sects among the students with mathematical accuracy. Obviously, but what follows? That we ought not to try to preserve it at all, or that we ought to preserve it as well as we can? He then imagines a number of possible ways of preserving the balance, and after fatiguing his imagination, asks "if we have not been betrayed into a jingle of absurdities and contradictions." I certainly think he has, and I am sorry for him.

Then he declares "an insult to the various religious bodies to be implied in the insinuation that if merit prevailed without note of sect, Unitarians would inevitably predominate in number, or in eminence, or in both, among the professors." Such an insult is implied in such an insinuation, but the insinuation has not been made. It is not said that the danger must always be from Uni- tarianism, but that it happens to be from Unitarianism now.

To preserve the needful equilibrium of sects among the students only one or two simple precautions are necessary. No equilibrium

of sects among professors is in the least necessary. All that is required in this respect is that there shall not be an enormous pre- ponderance of any one sect. Of this there is no danger at present at University College. Another simple rule, that which the Council has followed in the present instance, is to be shy of admit- ting one of those great representative theologians who are enthu- siastically worshipped by one sect and objects of aversion to other sects, and have therefore an abnormal power of attraction and repulsion. This has been repeated ad nauseam, but it must be repeated until our opponents grow tired of perverting it into something quite different.

It pleases you, Sir, and "A Proprietor" to assume that this personal influence is always in proportion to the ability of the man who possesses it, and that therefore in excluding it we exclude much first-rate ability. No one doubts that Mr. Martineau possesses much philosophical ability along with his sectarian etninence, but the combination is not usual. The men who would be excluded are not generally, I think, such as it would on other grounds be very desirable to secure. They are such men as Dr. Pusey, Archbishop Manning, Dr. Macneile, Bishop Wilberforce, eminent men, and men of a certain kind of ability, but not of the stuff of which great educators are made.

But you will say, the greatest man of all would be one who should unite a personal influence like that of one of these with the acquirements and teaching power of a Hamilton, and just this greatest man of all the rule would exclude. Something like this you urge in your article headed, "Maimed Universities."(?) The greatest man, you say, is sure to hold strong opinions on the greatest subjects, and these subjects are connected with religion. Certainly, but not to mention that the greatest man will very seldom be or remain long the representative of any religious sect, the objection is only another proof that you do not understand the Council's position. They hold it to be their business to choose the candidate whose total influence on the College will be the best, whereas you hold that one part of that influence, the part, namely, which affects the College as a place of unsectarian education, ought to be omitted from consideration. Accordingly, while you think Mr. Martineau the right man, looking only at one part of his influence, they, looking at the whole, see it to be mixed, and reject him. But when the greatest man of all presents himself, the Council will say that, though the unfortunate influence may be there, the good influence preponderates.

You will say,—is not this true of Mr. Martineau? Who, can doubt that his total influence will be better than Mr. Robertson's? Well, Sir, this is what the Council do doubt. And here we reach the fundamental differences between you and them, and the cause of all this disturbance. You think Mr. Martineau a man of trans- cendent merit ; they think him a man of considerable merit.—I am, Sir, your obedient servant,

A FRIEND OF THE COLLEGE. •

Mr. Martineau. The casuistry of "A Friend of the College" would discover sufficient ground of rejection for any objectionable heterodoxy nudes the formula, "The preponderating influence is here sectarian,—there, not." Had Mr. Mansel; or the late Dr. Whately, applied, we do not deny for a moment that Mr. Grote, and possibly "A Friend of the College," might have taken the same objection which they now take. But we are quite sure it would have been overruled in a moment, and without a chance of success. It is against a Unitarian alone that it could have been successful. We care much leas for Unitarianism per se than for most forms of liberal Church theology, and think it less true, but we cannot be blind to the fact that it has far less chance of fair play when men of the world weigh "preponderating influences for good" in their weighted moral balances.—En. Spectator.]