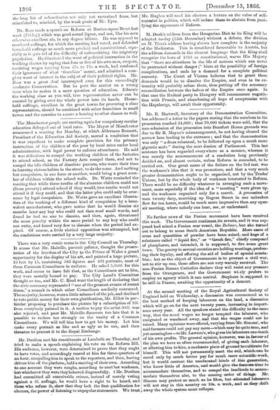 Page 2, 15 December 1866 — Mr. Bass made a speech on Reform at Burton-upon=crentlast week
Close

Mr. Bass made a speech on Reform at Burton-upon=crentlast week

(Friday) which was good .sound liquor,. and not, like his own otherwise excellent ale, in any degree bilious. He was opposed to manhood suffrage, for which the meeting had voted, and defended household suffrage as much more prudent and constitutional, espe- cially as it gets rid of the difficulty of enfranchising the migratory population. He illustrated the want of political instruction in the working classes by saying that four or five of his own men, coopers, receiving wages varying from 47s. to 75s. a week, had confessed their ignorance of what 'franchise' meant, and admitted a com- plete want of interest in the subject of their political rights, Mr. Bass was a great deal interrupted even for this exceedingly moderate Conservatism. But he puts the matter on a wrong issue when he makes it a were question of education. Educate the working class as you will, true representation never can be ensured by giving over the whole power into its hands. House- hold suffrage, excellent in the great towns for procuring a class representation, should be combined with other franchises in small towns and the counties to secure a hearing to other classes as well.