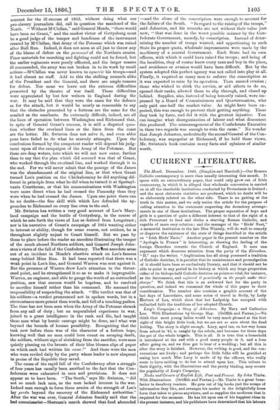 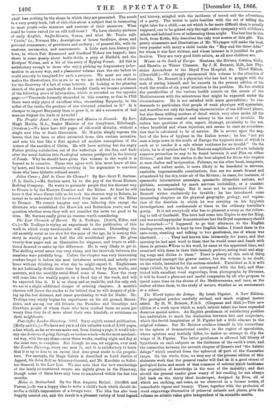 Nooks and Corners of English Life, Past and Present. By

John Timbs. With Illustrations. (Griffith and Farram)—Mr. Timbs is a great bene- factor to desultory readers. He gets out of big books just the scraps of information they like, and arranges his matter in the delightfully loose form that takes to pieces anywhere, and so supplies the modicum that is required for the moment. He has hit upon one of his happiest ideas in the present instance, and his publishers have determined that his labours

shall lose nothing by the shape in which they are presented. The result is a very pretty book, full of chit-chat about a subject that is interesting to most people—the manners and customs of their ancestors. What could be better suited for an odd hall-hour? We have sketchy pictures of early English, Anglo-Roman, S.txon, and what Mr. Timbs calls "Castle," i.e., Norman life ; descriptions of house furniture, dress, and personal ornaments ; of provisions and cookery ; of peasant life, with its customs, ceremonies, and amusements. A little rush into history fol- lows, in which Fair Rosamond and Cardinal Wolsey arc bagged ; then

there is some gossip about battle-fields, a peep at Hatfield, and the Evelyns' Wotton, and a bit of the story of Epping Forest. All this is

satisfactory enough to those who enjoy picking up fragmentary infor- mation in an easy way, and a pleasanter volume than the one before us could scarcely be imagined for such a purpose. We must not omit to notice the illustrations, the more so as we are indebted to one of them for the discovery of a fact of some interest. In looking at the pleasing sketch of the great quadrangle at Arundel Castle we became possessed of the following piece of information, which is recorded on the opposite page :—"Vineyards formerly abounded in this country, so that in 1763 there were sixty pipes of excellent wine, resembling Burgundy, in the cellar of the castle, the produce of one vineyard attached to it." Is it cheaper to import Burgundy than to grow it, or did a succession of bad seasons disgust the lords of Arundel ?