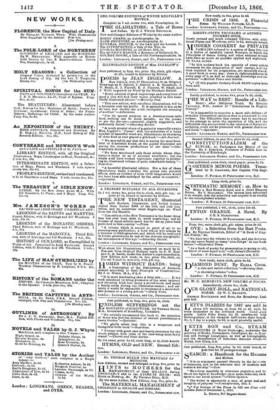 FLORENCE, the New Capital of Italy. By CHARLES RICHARD WELD. With Illustrations from Drawings by the Author. Post Boo.

The FOLK-LORE of the NORTHERN

HOLY SEASONS: a Collection of

Original Verses, dedicated by percals.lon to the Lord Bishop of Ely. By the Bev. T. TYL.ECOTE. Crown 8vo. [On Wednesday next.

The BEATITUDES: Abasement before Goo; Sorrow for Sin; Meekness of Spirit; Desire for Holiness ; Gentleness; Purity of Heart; the Peace- Makers ; Sufferings for Christ. By the same Author. leap. 8vo, 3s 6d.

-An EXPOSITION of the THIRTY-

on the LIFE and EPISTLES of St. PAUL:— LIBRARY EDITION, with all the Original Illustrations, Maps, Landscapes on Steel, Woodcuts, Asc. vole. 4to, 48s.

LEGENDS of the SAINTS and MARTYRS. Fourth Edition, with 19 Etchings and 187 Woodcuts. 2 vols., ale 6d.

LEGENDS of the MONASTIC ORDERS. Third Edition, with 11 Etchings and 83 Woodcuts. 1 2.1s.

HISTORY of OUR LORD, as Exemplified in Works of Art. Completed' by Lady &tenser.. Second Edition, with 81 Etchings and 281 Woodcuts. 2 vols., 42e.

The LIFE of MAN SYMBOLIZED by the MONTHS of the YEAR. Text by R. ?LOOT. Woodcut Illustrations by It. Leighton, F.S.A. 4t0, 42s.

HISTORY of the ROMANS under the EMPIRE. By CHARLES hInntvatz, B.D., Chaplain to the Speaker. 8 vols. post Boo, 48s.

The BRITISH CAPTIVES in ABYS-

Mszvnizt, each complete in One Volume :—

General Bounce, Is. Interpreter, 5a. Gladiators. 5s. Rate Coventry, Is. Good for Nothing, es. Queen's Manes, 68.

STORIES and TALES by the Author

of " Amy Herbert," each complete in a Single volume

Complete in I. vol. crown Ave, with Frontispiece, 6s.

THE GLADIATORS; a Tale of Rome and Judea. By G. J. WHITE Ifito.vims.

GOOD for NOTHING, or All Down Hill, 6s. The QUEEN'S NAMES, a Romance of Holyrood, 6s. HOLMBY HOUSE, a Tale of Old Northamptonshire, 5s. London: Looniness, Gazes, and Co., Paternoster row.

This new edition, with excellent illustrations, will be a favourite with the public. It is agreeable to ate, as we do here, how readily one artist interprets the meaning of another."—d.therneurn.

"For. tie special purpose as a drawing-room-table book, nothing can be more suitable. As the poems. so are the pictures,—graceful, slightly suggestive, and sufficiently varied."—Saturday Review.

"A much greater share of popularity assuredly awaits Miss Ingelow's 'Poems' with the attraction of a large number of beautiful woodatts, illustrations as charming of their kind as ever graced a gift-book."—Art Journal.

" We may safely say that this is among the most beau. Wei of illustrated books, as the poems illustrated are among the choicest productions of our time."—Con- temporary Review.

"We have mentioned only those artists whose Illus- trations strike us as of unusual excellence ; but the whole staff have worked vigorouely together in produc- ing an illustrated volume of quite remarkable beauty."—

"A beautiful Illustrated edition. Not a few of these illustrations really tianslate the poems into pictorial effects, such as readers of even vivid imagination would not have been able unhelped by the artist to conceive."

A PRESENT SUITABLE TO ALL OCCASIONS.

THE NEW TESTAMENT, illustrated with Borders, Ornaments, and Initial Letters copied from Italian 11188. of the 15th and 16th Cen- turies, and by numerous other Engravings on Wood from the Old Masters.

"This edition of the New Testament is the finest thing that has ever been done in wood engraving; and no volume of equal artistic merit has for ma ny years been published in this country."—Times.

"A volume which is second in point of art to no contemporary publication; a book which will always be a treasure to bibliographers, and which will be reckoned in future generations as one of the choicest typographi- cal monuments of this age."—Saturday Review. London: LONGMAN'S, GREEN, and Co., Paternoster row.

With about 140 illustrations, engraved on wood by G. Peaison from Original Designs made by F. W. Kepi and E. A. Smith, under the Author's superintendence, New Edition now ready, in too, price 21s, cloth, or, 27s halt bound in morocco, with gilt top.

110M.ES WITHOUT HANDS: being a Description of the Habitations of Animals, classed according to their Principle of Construction. By J. 0. WOOD, M.A., F.L.S.

"It is more interesting than a fairy tale.-- It is a. work calculated to bring pleasures of the most rational and elevating kind into many a school-room and many a family circle during the Christmas season ; and cer- tainly it would be iniposeible to recommend a more suit- able present to a young person."—Daily News.

NDLESS SUFFERINGS not the _ILI DOCTRINE of SCRIPTURE. By TEMItie DAVIS, M.A., Incumbent of Roundhay, Yorkshire.

"We cordially recommend this book to the attention of those who find the doctrine of eternal punishment a heavy burden."—Spectator.

"We gladly admit that this is a temperate and thoughtful little book."—Guardian.

"Written with great care and hearty reverence for the whole subject, both sides of the case being most fairly stated."—Church and State Review.

HINTS to MOTHERS for the MANAGEMENT of their HEALTH during PREGNANuY and in the LYING IN ROOM: with Hints on Nursing, &a. By Thomas Benz, M.D. By the same Author, New Edition, leap. 8vo, price 53.

The MATERNAL MANAGEMENT of

CHILDREN in HEALTH and DISEASE.

II FAMILIES reduced to a system of Easy Printice in a Series of carefully tested Receipts, in which the Principles of Baron Liabig and other eminent writers have been as much as possible applied and explained. By ELIZA Aaron.

"In this cookery-book the quantity of every article necessary for the preparation of each receipt. and the time required for its preparation, are minutely stated. A good book in every way ; there is rightmindeduesa in every page of it, as well as thorough knowledge and ex- perience."—Medical Times and Gazette.

'IV Of this popular Cookery-Book 84,000 copies have been sold.

THE WAY to REST: Results of a Life- Seam) after Religious Truth. By ROBEELT Yam:max, D.D., Author of "Revolutions in English History."

"It Is impossible to conceive a more able defenses of orthodox Evangelical opinions than is contained In this volume. The difficulties that reason has to eueounter in the attempt to solve the mysteries of life, and the difficulties that are involved in the rejection of Scripture authority, could not be presented with greater clearness and force."—Spectator.

CONSTITUTIONALISM of the FUTURE; or, Parliament the Mirror of the Nation. By J. LORIMER, Professor of Public Law in the Univereity of Edinburgh.

QYSTEMA.TIC MEMORY: or, How to

Make a Bad Memory Good, and a Good Memory Better. By T. MacLiutsar. The system here submitted Is go simple, that the schoolboy can acquire it as readily as the accomplished scholar.

OVE : a Selection from the Best Poets. ILA By Tnesiss SHORTER, Editor of "A Book of Eng- lish Poetry," Aso.

"We have lent the volume to a lady, and she declares that she never found so many 'nice things' in oae book

"As a book of poetry for presentation to young er old, we know. of none equal to it."—St. Jamas Chronicle.

.LA PRINTERS (8 Royal Exchange), undertake the printing of Books, Newspapers, Catalogues, do., in Eng- lish and Foreign Languages, as well as Lituography, and the manufacture of lirst-chusa Account Books,— Works, New Cross, 8.E.

SEARCH: a Handbook for the Humane

"It is an argument penned directly In the in:al-este of humanity, and in the Interests also of modesty and common decancy."—Sais- " He strives manfully to overcome prejadioe, and to throw the light of knowledge upon some hideously dark spots in our social systern."—Public Opinion.

"The writer is apparently a man of great zeal and integrity of purpose.' —Nonconformist, Dec. 5.