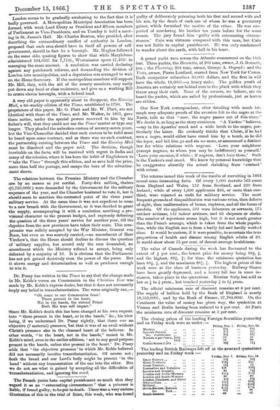 Page 3, 15 December 1866 — The relations between the Prussian Ministry and the Chamber are
Close

The relations between the Prussian Ministry and the Chamber are

by no means as yet cordial. Forty-five million., thalers -(6,750,0001.) were demanded by the Government for the military 'expenses of the year, and the Chamber hesitated to vote it, lest it should seem to sanction. the -contested point of the three years' military service. At the same time it was not expedient to eome -to a new breach with the Government, so it was decided to grant the supply, accompanying it with a resolution ascribing a pro- visional character to the present budget, and expressly deferring the question of the three years' service for another year, till the -deputies from the new provinces have taken their seats. This com- promise was sulkily accepted by the War Minister, General von ..B,00n, but even so was scarcely carried,—an amendment of Herr Tirchow's, that the House should decline to discuss the question -of -military supplies, but accord only the sum demanded, an amendment which the Ministry refused to accept, being only -defeated by a majority of 10. It is obvious that the Parliament has not yet gained decisively even the power of the purse. But it shows energy and determination as well as prudence enough to win it.