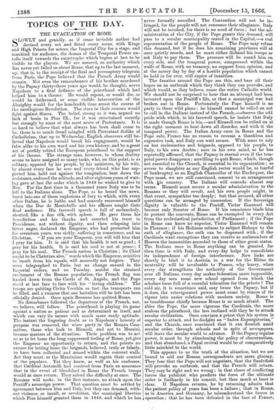 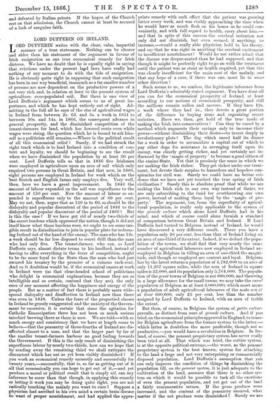 THE EVACUATION OF ROME.

SLOWLY and grandly, as if some invisible author had devised every act and fitted every scene, with Kings and High Priests for actors, the Imperial City for a stage, and mankind for audience, the drama of the Temporal Power un- rolls itself towards the catastrophe which begins at last to be visible to the players. We are assured, on authority which has never yet failed us about Rome, that up to the last moment, up, that is, to the receipt of the final and peremptory telegram from Paris, the Pope believed that the French Army would remain. Not even the remembrance of his brother murdered by the Papacy thirty-three years ago would, he thought, nerve Napoleon to a final defiance of the priesthood which had helped him to a throne. He would repent, or would die, or would be dethroned, or some visible intervention of the Almighty would for the hundredth time arrest the course of the sacrilegious Revolution. The stars in their courses would fight against Sisera. The belief, strong as it was, argued no lack of brain in Pius IX., for it was entertained secretly but strongly by some of the most acute of Protestants. It is so hard to believe that what always has been shall cease to be, there is so much dread mingled with Protestant dislike of Catholicism, that up to Wednesday, English observers still be- lieved that Napoleon would break his engagement, would be false alike to his own word and his own history, and by a great act of perfidy rebind the European priesthood to the support of his throne. The strange man, however, to whom destiny seems to have assigned so many tasks, who, on this point, is so solitary, opposed by his people, by his ministers, by his wife, by almost every face he sees and every friend who has sup- ported him, held out against the temptation, beat down the resistance, endured the solitude, and after eighteen years of wait- ing gave at last the order which in 1848 he wished to give to Ney. For the first time in a thousand years Italy was to be left to the Italians alone. The Pope, as he heard the news, burst into one of those explosions of fury to which, with every other Italian, he is liable, and had scarcely recovered himself when the Due de Montebello and his officers sought their final audience. His farewell speech is full of melancholy, shotted, like a fine silk, with spleen. He gave them his benediction and his thanks, and asserted his trust in Providence, not without dignity, and then relapsing into bitter anger, declared the Emperor, who had protected him for seventeen years, was sickly, suffering in conscience, and no Christian. "If you see your Emperor, you will tell him that I pray for him. It is said that his health is not so good ; I pray for his health, It is said his soul is not at peace ; I pray for his soul. The French nation is Christian ; its Chief ought to be Christian also," words which the Emperor, sensitive to insult from his equals, will assuredly not forgive. They were telegraphed to Paris, but no change ensued in the Imperial orders, and on Tuesday, amidst the strained excitement of the Roman population, the French flag was hauled down from the Castle of St. Angelo, and the Pope sto3d at last face to face with his "loving children." The troops are quitting Civita Vecchia as fast the transports can be filled, and a rumour that one battalion will be left has been officially denied. Once again Brennus has quitted Rome.

No disturbance followed the departure of the French, nor, we believe, will follow. The priesthood is playing its game against a nation as patient and as determined as itself, and which can vary its means with much more ready aptitude. The instant the lingering doubt as to Napoleon's honesty of purpose was removed, the wiser party in the Roman Com- mittee, those who look to Ricasoli, and not to Mazzini, became masters of the situation. Their problem was to act so as to let loose the long suppressed feeling of Rome, yet give the Emperor no opportunity to return, and the priests no excuse for letting loose the brigands, believed, truly or falsely, to have been collected and armed within the convent walls. Act they must, or the Mazzinians would regain their control of the populace.. Yet they knew, as well as his confessor, that Cardinal Antonelli had received from Paris an assurance that in the event of bloodshed in Rome the French troops would at once return. They solved the difficulty at once. The Romans will make, in the first instance, no attack upon the Pontiff's sovereign power. That question must be settled by agreement between him and Italy, but they can demand, with- out violence, or insult, or revolution, the municipal liberties which Pius himself granted them in 1848, and which he has never formally annulled. The Convention will not be in. fringed, for the people will not renounce their allegiance. Italy will not be invoked, for there is no need of force ; but the ad- ministration of the City, if the Pope grants this demand, will pass to a secular municipality seated in the Capitol,—a real representation of the people of Rome. The Pope may refuse this demand, but if he does his remaining provinces will at once quietly secede, and he must either disband his troops or ask Italy to pay them. The pressure will be round him on. every side, and the temporal power, compressed within the walls of Rome, with no treasury, no support from opinion, and at the mercy day by day of a hostile population which cannot be held in for ever, will expire of inanition.

The fanatics around the Pope see this, and base all their hopes on an outbreak which they think they can provoke, and which would, as they believe, rouse the entire Catholic world. We should not be surprised to hear that an attempt had been invented upon the Pontiff's life, or that a municipal war had broken out in Rome. Fortunately the Pope himself is no party to these wild plans ; he himself cannot be relied on not to call in the Italians instead of the French,—observe the odd pride with which, in his farewell speech, he insists that Italy is made though Rome is his,—and Ricasoli can be relied on at the right moment to beat down all disorder, and with it the temporal power. The Italian Army once in Rome and the Pope safe, France has no reason to resume a thankless and expensive task, and Italy can wait secure. With none to rely on but ecclesiastics and brigands, opposed to his people, to Italy, to his own doubts ; sure in his own mind, as he has repeatedly affirmed, that the Papacy is eternal even if the tem- poral power disappears ; unwilling to quit Rome, which, though not essential to the Church, is essential to its organization as averse to slaughter as any English rector would be, as feaktff of bankruptcy as an English Chancellor of the Exchequer, the Pope must, we are still convinced, consent to an arrangement with is country. The Italians will concede almost any terms. Ricasoli must secure a secular administration to the- Romans or they will revolt, and his own people might, in that event, sympathize too deeply; but that secured, all other questions can be arranged by concession. If the Sovereign dignity is valuable to the Pontiff, Victor Emanuel will become only Senator of Rome. If his conscience binds him. to protect the convents, Rome can be exempted in every Act from the ecclesiastical jurisdiction of Parliament ; if the Pope in Rome can know no superior, Victor Emanuel will remain in Florence ; if his Holiness refuses to subject Bishops to the oath of allegiance, the oath can be dispensed with ; if the Cardinals want exemptions they can receive as ambassadors of Heaven the immunities accorded to those of other great states. The Italians once in Rome anything can be granted, for then time is with Italy, and every day helps to consolidate its independence of foreign interference. New links are shortly to bind it to Austria, in a war for the Rhine its neutrality will be invaluable to • France, why hurry, when every day strengthens the authority of the Government over all Italians, every day makes federation more impossible, every day sees some new school opened from which the scholars issue full of a scornful toleration for the priests ? The cold air, it is sometimes said, may brace the Papacy, but if it does, the reinvigorated power must come by reason of its vigour into easier relations with modern society. Rome is so troublesome chiefly because Rome is so much afraid. The abler the Pope, the more vigorous the Cardinals, the more zealous the priesthood, the less inclined will they be to attack secular civilization. Once convince a priest that his system is superior to attack, and he dislii an "Index Expurgatorius," and the Church, once conviaecl that it can flourish amid. secular order, through schools and in spite of newspapers, will leave the secular world to advance. If the Papacy regains power, it must be by abandoning the policy of obscurantism, and that abandoned, a Papal revival, would be of comparatively little mischief to the world.

This appears to us the truth of the situation, but we are bound to add our Roman correspondents are more gloomy. They fear that the Pope will not negotiate, that the Sanfedisti will provoke an outbreak, and that the French will return. They may be right and we wrong ; in that chaos of conflicting forces the publicist who predicts the form of the ultimate order is foolhardy in his conceit, but thus much at least is clear. If Napoleon returns, he by returning admits that the patient policy of years has been a failure ; that in Romp, as in America and Germany, he misunderstood the forces in operation ; that he has been defeated in the face of France, and defeated by Italian priests. If the hopes of the Church rest on that admission, the Church cannot at least be accused of a lack of sanguine faith.