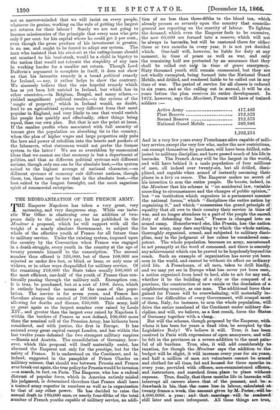 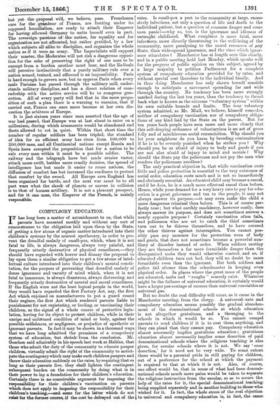 THEREORGANIZATION OF THE FRENCH ARM - Y. T HE Emperor Napoleon has taken

a very great, very menacing, and very dangerous step. While our imbe- cile War Office, is chattering over an addition of two-, pence daily to the soldier's pay, he has published in the, Moniteur a proposal, which he will support with all the weight of a nearly absolute Government, to subject the whole of the effective youth of France for all future time to military service. Under the existing system, imposed upon the country by the Convention when France was engaged in a death struggle; every youth in the country at the age of twenty presents himself to the conscription. The annual number thus offered is 326,000, but of these 108,000 are rejected as under five feet, or blind, or lame, or only sons of widows, or in other ways disqualified for military service. Of the remaining 218,000 the State takes usually 100,000 of the most efficient, one-half of the youth of France thus con- tinually passing through the military mill. Exemption can, it is true, be purchased, but at a cost of 100i. down, which is entirely beyond the means of the mass of the popu- lation. The service is for seven years, and France has therefore always the control of 700,000 trained soldiers, or allowing for deaths and disease, 650,000. This army, half as great again as the largest number ever raised by Louis XW., and greater than the largest ever raised by Napoleon L within the borders of France as now defined, 100,000 more than the nominal roll of the Prussian Army, has hitherto been considered, and with justice, the first in Europe. It has entered every great capital except London, and has within the last twelve years defeated the two strongest military empires —Russia and Austria. The consolidation of Germany, how- ever, which this proposal will itself materially assist, has alarmed the Emperor not only for the prestige, but for the safety of France. It is understood on the Continent, and is, indeed, suggested in the pamphlet of Prince Charles on military science, that should war between Prussia and France ever break out again, the true policy for Prussia would be invasion —a march, in fact, on Paris. The Emperor, who has a radical distrust of popular force, which in America entirely misled Ins judgment, is determined therefore that France shall have a trained army superior in numbers as well as in organization to that of any other power. He has decided to raise the annual draft to 160,000 men or nearly four-fifths of the total number of French youths capable of military service, an addi- tion of no less than three-fifths to the blood tax, which already presses so severely upon the country that councils- general are reporting on the scarcity of labour. To lighten the demand; which even the Emperor feels to be excessive, the new 60,000 are formed into a reserve, which -will not. be always in barracks,. but will be cantoned there.for either' three or two months in every year, it is not yet decided. which, One-half will, however, be liable for duty. at any- moment, in time of peace as well as war, and only' the remaining. half are: protected, by an assurance that they shall be called. out only in time of grave emergency. Sixty thousand youth still remain exonerated, but they are- not wholly exempted, being: formed into the National Guard Mobile, and drilled, and rendered liable to, be called out in. any- time of war. The. period of service, for-all classes is reduced to six years, and. as the calling out is- annual, it will be six years before the plan receives its entire development. In, 1872, however, says theiMoniteur, France will have of Urine& soldiers :-

And in a very-few years every Frenchman alive capable of mili- tary service, except the very few who, under the new restrictions, can exempt themselves by purchase, will have been drilled, sub- jected to military discipline, and have passed much of his life in barracks. The French Army will be the largest in the world,. and will have behind it a male population, of four millions of men, all indeed over twenty-six, but all drilled, disci. plined, and capable when armed of instantly assuming their places in a levy, en masse. The Emperor makes no , secret

his intention to arm the entire people. He boasts, indeed, in, the Moniteur that his scheme is "no accidental law, variable- according. to circumstances and the changes of public opinion,'.' but "an institution which organizes in a permanent manner

the. national forces," which " disoiplines,the entire nation by organizing it," and which " consecrates the grand principle of. equality that all owe to their country their service in time DE war, and no longer abandons to a part of the people the Beare& duty of defending the land;" France is changed into am armed, camp. Henceforward she, like Prussia, has. the nation)._ for her army, may dare anything to which the whole nation,. thoroughly organized, armed, and subjected to military disci- pline, may in the judgment of her rulers be considered com- petent. The whole population becomes an army, accustomed to act promptly at the word of command, and, there is scarcely any achievement which can be proved to be hopelesslybeyondits, reach. Such an example of organization has never yet been. seen in the weld, and cannot be without its effect on ordinary civil life. A Frenchman, of all men, takes to drill kindly,. and we may yet see in Europe what, has never yet been seen,. a nation organized, from head to heel, able to act for any end, whether it be the building of a city or the conquest of a. province, the construction of new canals or the desolation of a. neighbouring country, as one man. The additional force thus gained for France will be overwhelming, will materially in- crease the difficulties of every Government, will compel most of them, Italy, for instance, to arm the whole population, will drive the entire manhood of the Continent under military dis- cipline, and will, we believe, as a first result, force the States. of Germany together with a clang.

But will the .scheme, though proposed by the Emperor, with_ whom it has been for years a fixed idea, be accepted by the, Legislative Body? We believe it will. True, it has be= received in Paris with expressions of open annoyance, and will:. be felt in the provinces as a severe addition to the most pain- ful of all burdens. True, also, it will add considerably to taxation, for though the. Moniteur says the addition to the budget will be slight, it will increase every year for six years, and half a million of men not volunteers cannot be armed and clothed for all time, -fed and housed for three months in every year, provided with officers, non-commissioned officers, and instructors, and marched from place to place without, expense. True, finally, that three months life in barracks will interrupt all careers above that of the peasant, and be a. drawback in his, that the mere loss in labour, calculated at. twenty francs. a week, the amount given by M. Perier, will be 4,000,000/. a year; and that marriage will be rendered. still later and more infrequent. All these things are true,

but yet the proposal will, we believe, pass. Frenchmen care for the grandeur of France, are fretting under its supposed humiliation, are ready to attack their Emperor for having allowed Germany to unite herself even in part. The sovereign, passions of the' nation, for equality and for organization are not affronted, but rather gratified, by a law which subjects all' alike to discipline, and organizes the whole nation as if it were an army. The Imperialists will support their master, the.Moderates will not risk a dangerous opposi- tion for the sake of preserving the right of one man to be exempt from a burden another must bear, and the Radicals will perceive instinctively that a purely military rule over a nation armed, trained, and officered is an impossibility. Paris is hard enough to govern now, but to oppress Paris when every male Parisian. has passed through the military mill, under- stands military discipline, and has a direct relation of com- radeship. with the, active service will be to compress gun- cotton. All of every party will feel that in the mere propo- sition of such a plan. there is a warning to enemies, that if carried out, France can once more become at her own dis- cretion the arbitress of Europe. It is just sixteen years since men asserted that the age of war had passed, that Europe was at last about to enter on a miLlenium, during which armaments would be abandoned and fleets allowed to rot in quiet. Within that short time the number of regular soldiers has been tripled, the standard of idea for an efficient army has risen from 100,000 to 300,000,men, and all Continental nations except Russia and Spain have accepted the proposition that for a nation to be safe every man within it must be a possible soldier. The railway and the telegraph have but made armies vaster, attack more swift, battles more,cruelly decisive, the spread of intelligence has but made it easier to rouse nations, the diffusion of comfort has but increased the readiness to protect that comfort by the sword. All Europe save England has been organized for battle, and the next war must be to all past wars what the shook. of planets or moons in collision is to that of human artillery. It is not a pleasant prospect, and fOr it one man, the Emperor. of the French, is mainly responsiblei