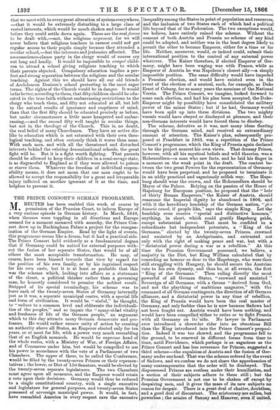 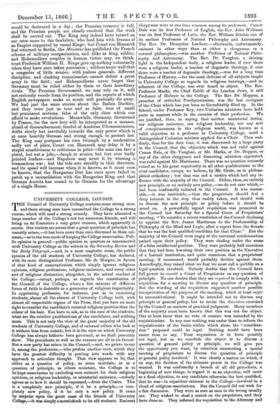 • RE17TER has been enabled this week, of course by permission of the Prussian Court, to inform Europe of a very curious episode in German history. In March, 1848, when thrones were toppling in all directions and Europe seemed for a moment menaced with anarchy, the Prince Con- sort drew up in Buckingham Palace a project for the reorgan- ization of the German Empire. Read by the light of events, this programme seems like a dream, but it had a practical side. The Prince Consort held evidently as a fundamental dogma that if Germany could be united for external purposes with- out the fusion of her separate States, that would be of all others the most acceptable transformation. He may, of course, have been biassed towards that view by regard for the position of his own family, or by his ingrained respect for his own caste, but it is at least as probable that this was the scheme which, looking into affairs as a statesman of the closet, a political thinker rather than a governing man, he honestly considered to promise the noblest result. Stripped of its special terminology, his scheme was to leave each of the twenty-seven States of Germany internally jirst as it was, a separate municipal centre, with a special life and form of civilization. It would be "sinful," he thought, to "reduce to a common level and obliterate the individuali- ties of the peoples," and so impair the "many-sided vitality and freshness of life of the German people," an argument which to this day attracts many German democrats and pro- fessors. He would rather ensure unity of action by creating an authority above all States, an Emperor elected only for ten years, or at most for life, with a power very much resembling that of an English monarch. He would be supreme head of the whole realm, with a Ministry of War, of Foreign Affairs, and of Commerce under him, but would be compelled to use his power in accordance with the vote of a Parliament of two Chambers. The upper of these, to be called the Conference, would be filled by the twenty-seven Princes or their represen- tatives; the lower, or Diet of 150 Senators, would be elected by the twenty-seven separate legislatures. The two Chambers must agree upon all measures, and the Emperor would retain a veto upon their decisions. Germany would thus be reduced to a single constitutional country, with a single executive and legislature for general purposes, and twenty-seven States possessed of sovereign municipal power. It would, in fact, have resembled America in every respect save the excessive inequalityamong the States in point of population and resources, and the inclusion of two States each of which had a political life beyond that of the Federation. The two exceptions would, we believe, have entirely ruined the scheme. Without the consent of both Austria and Prussia no scheme of any kind could be adopted, and neither was in the least degree likely to permit the other to become Emperor, either for a time or for life. Neither, moreover, would, or indeed could, submit their international position to the control of any external power whatever. The Kaiser therefore, if elected Emperor of Ger- many, might have been waging war. with France, while as Emperor of Austria he was Napoleon's closest ally—a simply impossible position. The same difficulty would have impeded a Prussian election, and would have existed even in the event of the election of a neutral, such, for example, as Duke Ernst of Coburg, for so many years the nominee of the National Verein. The Prince Consort, we imagine, looked forward to some such election, and had his plan been accepted, the Duke- Emperor might by possibility have consolidated the military power of the minor States ; but if he had, Germany would have been split up into three divisions. The two mighty vassals would have obeyed or disobeyed at pleasure, and their non-German interests would have forced them to disobey.

The scheme, defective as it was, met many ideas floating through the German mind, and received an extraordinary amount of attention. The Kaiser's plan, subsequently pro- posed at Frankfort in 1863, was a repetition of the Prince Consort's programme, which the King of Prussia again declared to be the project nearest his own views. That dreamy Prince, however, with all his mystical beliefs and wild theories, was a Hohenzollern—a man who saw facts, and he laid his finger in a moment on the weak point in the draft. The contest be- tween the two great Powers for the representation of Germany would have been perpetual, and he proposed to terminate it in an oddly practical and sagaciously selfish way. •The Haps- burg should wear the crown, and the Hohenzollern should be Mayor of the Palace. Relying on the passion of the House of Hapsburg for European position, he proposed that the "heir of thirty Roman Emperors," the Kaiser of Austria, should reassume the Imperial dignity he abandoned in 1806, and with it the hereditary headship of the German nation, "pro honoris camel, if people like," says the simple King. • Let the headship even receive "special and distinctive honours," anything, in short, which could gratify. Hapsburg pride, except substantial power. That must be confided to a subordinate but independent potentate, a "King of the Germans," elected by the • twenty-seven Princes, • crowned and anointed by an Archprimate, and • entrusted not only with the right of making peace and war, but with a• "dictatorial power during a war or a rebellion." At this time the Prussian Government possessed, we believe, a majority in the• Diet, but King William calculated that by conceding an honour so dear to the Hapsburgs, who were then still struggling with Hungary, he should secure the Austrian vote to his own dynasty, and thus be, at all events, the first "King of the Germans." Then ruling directly' the most powerful of all German States, "crowned and anointed" Sovereign of all Germans, with a throne "derived from God, and not the plaything of ambitious magnates," with the command of all German contingents, the direction of all German affiances, and a dictatorial power in any time of rebellion, the King of Prussia would have been the real master of Germany, and only feebler than he is now because Sadowa had not been fought out.. Austria would have been nothing, and would have been compelledleither to retie or to fight Prussia with all Germany on No lawyer 'in Parliament ever introduced a shrewder rider into an obnoxious Bill than the King introduced into the Prince Consort's proposi- tion. Indeed it was too shrewd, and the programme fell to the ground, to be renewed in different forms from time to time, until Providence, which perhaps is as sagacious as the Prince Consort and has less reverence for Princes, suggested a third scheme—the expulsion of Austria and the fusion of Ger- many under one head. That was the scheme ordered by the event of Sadowa, and we confess we do not share the apprehension of many contemporaries that the order will be disobeyed. The dispossessed Princes are restless under their humiliation, and a section of their subjects adhere to them still; but the Prussian Government is not one to be shaken off except by despairing men, and it gives the mass of its new subjects no reason for despair. There is a great deal of chatter, doubtless, and a good deal of discontent. The aristocracy are sullen, but powerless ; the armies of Saxony and Hanover, even if united. would be destroyed in a day ; the Prussian treasury is full, and the Prussian people are clearly resolved that the work shall be carried out. The King may indeed have turned an ear once more to the feudalists, who feed him with dreams of an Empire supported by vassal Kings ; but Count von Bismarck ha l returned to Berlin, the Moniteur has published the French scheme of military reorganization, and alike as king, soldier, and Hohenzollern sceptics in human virtue may, we think, trust Frederick William H. Kings give up nothing voluntarily when they have once taken possession ; soldiers know well that a congeries of little armies, with jealous generals, different discipline, and clashing commissariat, cannot defeat a great army in the field ; and Hohenzollerns never forget that Germany must be ruled either by them or their hereditary rivals. The Prussian Government, we may rely on it, will not seriously recede from its position, and the reports of which English newspapers make so much will gradually die away. We had just the same stories about the Italian Duchies, and they were just as true and as false, true of small but prominent sections, false of the only class which can afford to make revolutions. Meanwhile, Germany, threatened by France, for the new levy will be interpreted as a menace, afraid of dismemberment, fearful of Austrian Ultramontanism, drifts slowly but inevitably towards the only power which is at once heartily German and strong enough to protect her. The King may postpone his own triumph by a moderation sadly out of place, Count von Bismarck may delay it by a stupid sensitiveness to criticisms in print—the man can face a pistol, but not a joke,—laugh at armies, but fret over badly printed leaders—and Napoleon may avert it by winning a tremendous war ; but the tide sets steadily in that direction, and its speed will increase when it is known, as it must soon be known, that the Hungarian Diet has once more failed to patch up a reconciliation with the Hungarian King, and that German Austria has ceased to be German for the advantage of a single House.