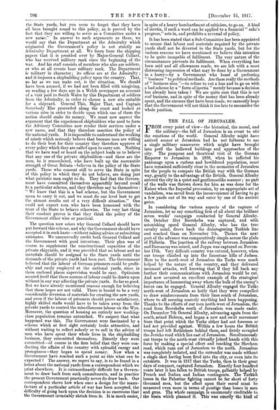 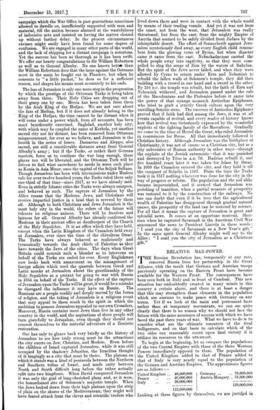 THE FALL OF JERUSALEM,

-PROM every point of view—the historical, the moral, and the military—the fall of Jerusalem is an event to stir • the emotions of the world. General Allenby might have arrived sooner at Jerusalem had he not forborne to use a single military manceuvre which might have brought into peril the hallowed buildings and approaches of the city. The pompous and theatrical visit of the German Emperor to Jerusalem in 1898, when he inflicted his patronage upon a curious and bewildered population, must have remained sufficiently clear in the memories of Jerusalem for the people to compare the British way with the German way, greatly to the advantage of the British. General Allenby entered the city in a quiet and gentlemanlike manner ; no part of the walls was thrown down for him as was done for the Raiser when the Imperial procession, by an appropriate act of vandalism, was saved from the inconvenience of having to go a few yards out of its way and enter by one of the ancient gates.

In considering the various aspects of the capture of Jerusalem, let us say something first of all about the brilliant seven weeks' campaign conducted by General Allenby. On October 31st Beersheba was captured, and with astonishing speed General Allenby, who has the true cavalry mind, drove back the disintegrating Turkish line and reached Gaza on November 7th. Thence the next part of the advance was comparatively simple across the plain of Philistia. The junction of the railway between Jerusalem and Datnascm was seized, and Joppa was captured on Novem- ber 17th. Very difficult country was entered, however, when our troops climbed up into the limestone hills of Judaea. Here to the north-west of Jerusalem the Turks were much helped by the nature of the country, and they delivered incessant attacks, well knowing that if they fell back any further their communications with Jerusalem would be cut. And now occurred an excellent example of the strategical importance of hammering away where the bulk of the enemy's forces can be engaged. General Allenby engaged the Turks north-west of Jerusalem so hotly that they were compelled to draw reinforcements from their lines south of Jerusalem, Where to all seeming scarcely anything had been happening Thanks to the efforts of our men north-west of Jerusalem, the road from Beersheba south of Jerusalem was made easier. On December 7th General Allenby, advancing again from the south, mixed Hebron, and began a new and swift movement from that point which the Turks either had not foreseen or had not provided against. Within a few hours the British troops had left Bethlehem behind them, and firmly occupied the Jericho road which lies east of Jerusalem. Simultaneously our troops to the north-west virtually joined hands with this force by making a special effort and reaching the Shechem road, which runs out of Jerusalem to the north. Jerusalem was completely isolated, and the surrender was made without a single shot having been fired into the city, or even into its outskirts. It was in 1517 that the Turks, then in their great days of conquest, captured Jerusalem. Exactly folit hundred years later it has fallen to British troops, gallantly helped by French and Italian and Indian contingents. The Turkish losses in the Palestine fighting cannot be far short of forty thousand men, but the effect upon their moral must be measured even more in terms of prestige than losses in men and guns. Thg whole campaign is enormously creditable to the brain Which planned It. This was mmody the kind of

campaign which the Wsr Office in past generations sometimes allowed to dawdle on, insufficiently supported with men and material, till the nation became alarmed at the wastefulness of indecisive acts and insisted on having the matter cleared up without further delay. In the present circumstances excuses might easily have been found for some degree of confusion. We are engaged in many other parts of the world, and the lack of shipping for a distant campaign is notorious. Yet the success has been as thorough as it has been swift. We offer our hearty congratulations to Sir William Robertson as well as to General Allenby. No one knows better than Sir William Robertson does that the issue against the Germans must in the main be fought out in Flanders, but when he consents to "a little packet," he does so for a sufficient reason, and shapes his means most accurately to his ends.

The loss of Jerusalem is only one more step in the progression by which the prestige of the Ottoman Turks is being taken away from them.- Their Holy Cities are dropping out of their grasp one by one. Mecca has been taken from them by the Arab King of the Hedjaz. We are not sure about the fate of Medina, but if it does not already belong to the King of the Hedjaz, the time cannot be far distant when it will come under a power which, from all accounts, has been most beneficently exercised. Baghdad, another holy city, with which may be coupled the name of Kerbela, yet another sacred city not far distant, has been removed from Ottoman misgovernment, for ever as we believe, and Jerusalem is the fourth in the series of losses. Damascus and Aleppo, also sacred, are still a considerable distance away from General Allenby's army ; but if the Turks, or rather their German masters, force us to continue the war long enough, these places too will be liberated, and the Ottoman Turk will be driven to find what sacredness he needs in some such place as Konia in Asia Minor, once the capital of the Seljuk Sultans. Though Jerusalem has been with intermissions under Moslem rule for over twelve hundred years, the Turks ruled there only one-third of that time—since 1517, as we have already said. Even in strictly Islamic cities the Turks were always usurpers, and behaved as such. The capture of Jerusalem by the Allies means that the Moslems, Jews, and Christians will receive impartial justice in a land that is revered by them all. Although to both Christians and Jews Jerusalem is the most holy city in the world, the rulers of the future will tolerate no religious animus. There will be freedom and fairness for all. General Allenby has already confirmed the Moslems in their ancient office as doorkeepers of the Church of the Holy Sepulchre. It is an office which they have held, except when the Latin Kingdom of the Crusaders held sway at Jerusalem, ever since the time of the chivalrous Omar. The Turks have always behaved as maliciously and tyrannically towards the Arab chiefs of Palestine as they have towards the Jews of the cities. The days when Great Britain °mild commit such a blunder as to intervene on behalf of the Turks are ended for ever. Every Englishman now looks back with amazement on the management of foreign affairs which used the quarrels between Greek and Latin monks at Jerusalem about the guardianship of the Holy Sepulchre as a pretext for going to war with Russia in 1854 on behalf of the Turks. If the effect of the capture of Jerusalem upon the Turks will be great, it would be a mistake to disregard the influence it may have on Russia. The Russians are a people readily and deeply moved by the forms of religion, and the taking of Jerusalem is a religious event that may appeal to them much in the spirit in which the ambition to possess Jerusalem appealed to our own Crusaders. Moreover, Russia contains more Jews than live in any other country in the world, and the aspirations of these people will turn gratefully to Jerusalem, even though they should not commit themselves to the material adventure of a Zionistic restoration.

One has only to glance back very briefly on the history of Jerusalem to see how truly strong must be the attractions the city exerts on Jew, Christian, and Moslem. Even before the children of Israel captured Jerusalem. while it was still occupied by the shadowy Jebusites, the Israelites thought of it longingly as a city that must be theirs. The plateau on which it stands was a kind of peninsula between the Northern and Southern tribes of Israel, and made unity between North and South difficult long before the tribes actually split into two kingdoms. When David conquered Jerusalem it was only the goal of long-cherished plans and, as it were, the foreordained site of Solomon's majestic temple. When the Jews looked down from their high plateau upon the strip of plain on the shores of the Mediterranean, they might well have feared attack from the clever and scientific traders who

lived down there and were in contact with the whole world by means of their trading vessels. And yet it was not from the coast, not from the west, that Jerusalem was really threatened, but from the east, from the mighty Empire of Assyria that seemed to be safely divided from Judaea by the inhospitable desert. The effort of Sennaoherib against Jeru- salem mysteriously died away, as every English child remem- bers from the glowing verse of Byron, but when disaster came it came from the east. Nebuchadnezzar carried the whole people away into captivity, so that they were com- pelled to sing the songs of Zion by the waters of Babylon. But the spirit of the Jews never failed, and when they were allowed by Cyrus to return under Ezra and Nehemiah to rebuild the fallen walls of Solomon's temple, they did their building with a trowel in one hand and a sword in the other. By 316 B.C. the temple was rebuilt, but the faith of Ezra and Nehemiah withered, and Jerusalem passed under the rule of the Macedonians and the Ptolemies before it came into the power of that strange monarch Antiochua Epiphanea, who tried to graft a -strictly Greek culture upon the very unwilling Semitic stem. The excesses of Antiochus Epiphanes proved that if faith had died among the Jews, it was at all events capable of revival, and every reader of history knows how that revival was victoriously expressed by the wonderful exploits of the fighting family of the Maccabees. Gradually we come to the time of Herod the Great, who ruled Jerusalem in eonunission for Rome. All that immediately followed is Christian history. Although Jerusalem was the birthplace of Christianity, it was not of course as a Christian city, but as a city subversive of Roman authority in other ways—through the exploits of the Jewish extremists—that it was punished and destroyed by Titus in A.D. 70. Hadrian rebuilt it, and five hundred years later it was taken for Islam by Omar. In 1099 the Crusaders entered the city, and they held it till the conquest of Saladin in 1187. From the time the Turks took it in 1517 nothing whatever was done for the city in the way of progress or reform. The population and the soil alike became impoverished, and it seemed that Jerusalem was perishing of inanition, when a partial measure of prosperity was restored to it by the construction of the railways. No one can doubt that even if it be true that the agricultural wealth of Palestine has disappeared through gradual natural causes, the prosperity of the land can be restored by science. For all that it means the capture of Jerusalem is great and splendid news. It comes at an opportune moment. Sher- man when he captured Savannah in the American Civil War announced the news to President Lincoln in these words : "I send you the city of Savannah as a New Year's gift." In the same spirit General Allenby might well say to the

"I send you the city of Jerusalem as a Christniaa Silt"