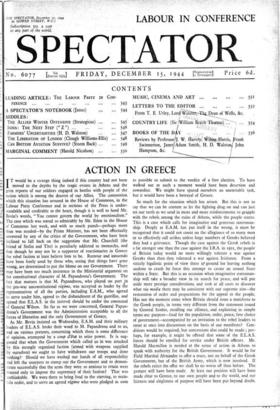 IT would be a strange thing indeed if this country had not been moved to the depths by the tragic events in Athens and the grim reports of our soldiers engaged in battles with people of the nation which is among the dearest of our Allies. The commotion which this situation has aroused in the House of Commons, in the Labour Party Conference and in sections of the Press is under- standable and creditable to the heart, though it is well to heed Mr. Bevin's words, "You cannot govern the world by emotionalism." The case which was stated so admirably by Mr. Eden in the House of Commons last week, and with so much punch—perhaps more than was needed—by the Prime Minister, has not been effectually answered by any of the critics of the Government, who have been inclined to fall back on the suggestion that Mr. Churchill (the friend of Stalin and Tito) is peculiarly addicted to monarchs, and that though he may not be a supporter of reactionaries in Greece the rebel faction at least believe him to be. Rumour and innuendo have been freely used by those who, seeing that things have gone wrong, are determined to put the blame on our Government. There may have been too much insistence in the Ministerial argument on the constitutional character of M. Papandreou's Government. The fact that matters is that M. Papandreou, who played no part in the pre-war unconstitutional regime, was accepted as leader by the representatives of all the parties, including E.A.M., who agreed to serve under him, agreed to the disbandment of the guerillas, and agreed that E.L.A.S. in the interval should be under the command of General Wilson. So far as we were concerned, General Papan- dreou's Government was the Administration acceptable to all the forces of liberation and the only Government of Greece.

As Mr. Bevin insisted on Wednesday, E.A.M. and their military leaders of E.L.A.S. broke their word to M. Papandreou and to us, and on various pretexts, concerning which there is some difference of opinion, attempted by a coup d'etat to seize power. Is is sug- gested that when the Government which called us in was attacked by this strongly organised faction (armed with weapons supplied by ourselves) we ought to ha've withdrawn our troops and done nothing? Should we have washed our hands of all responsibility and left the usurpers to stamp out the Government and to demon- strate successfully that the arms they were so anxious to retain were wanted only to impose the supremacy of their faction? That was unthinkable. We were there to bring food to the starving, to main- tain order, and to serve an agreed regime who were pledged as soon

as possible to submit to the verdict of a free election. To have walked out at such a moment would have been desertion and cowardice. We might have spared ourselves an unenviable task, but it would have been a betrayal of Greece.

So much for the situation which has arisen. But this is not to say that we can be content to let the fighting drag on and can just set our teeth as we send in more and more reinforcements to grapple with the rebels among the ruins of Athens, while the people starve. This is a case which calls for imaginative and generous statesman- ship. Deeply as E.A.M. has put itself in the wrong, it must be recognised that it could not count on the allegiance of so many men or so effectively call strikes unless large numbers of Greeks believed they had a grievance. Though the case against the Greek rebels is a far stronger one than the case against the I.R.A. in 1921, the people of Britain today would no more willingly tolerate a war against Greeks than then they tolerated a war against Irishmen. From a strictly legalistic point of -view there is groundfor leaving nothing undone to crush by force this attempt to create an armed State within a State. But this is an occasion when imaginative statesman- ship will take a broader view in its search for peace, and will put aside mere prestige considerations and seek at all costs to discover what via media there may be consistent with our supreme aim—the restoration of order and preparations for the appeal to the people. Has not the moment come when Britain should issue a manifesto to the Greek people, in terms very different from the statement issued by General Scobie, recalling our alliance, and explaining in simple terms our purpose—food for the population, order, peace, free choice of government—accompanied by an invitation to the rebel leaders to enter at once into discussions on the basis of our manifesto? Con- ditions would be required, but concessions also could be made ; per- haps, for example, it might be offered that some of the E.L.A.S. forces should be enrolled for service under British officers. Mr. Harold Macmillan is needed at the scene of action in Athens to speak with authority for the British Government. It would be for Field Marshal Alexander to offer a truce, not on behalf of the Greek Government, but of the British Army, which is now involved. If the rebels reject the offer we shall be no worse off than before. The gesture will have been made. At least our position will have been made clear to Greece, to our own people and to the world, and our fairness and singleness of purpose will have been put beyond doubt.