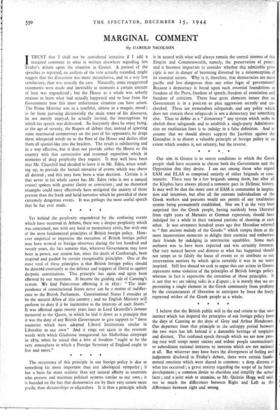 By HAROLD N1COLSON ITRUST that I shall not be considered intrusive if I add a marzinal comment to what is written elsewhere regarding last Friday's debate upon the situation in Greece. A perusal of the

speeches as reported, an analysis of the vote actually recorded, might suggest that the d:scussion was more inconclusive, and in a way less satisfactory, than was actually the case. Naturally, some exaggerated statements were made and inevitably at moments a certain amount of heat was engendered ; but the House as a whole was soberly

anxious to learn what had actually happened and to hear from the Government how this most unfortunate situation can have arisen. The Prime Minister was in a youthful, almost in a maquis, mood; so far from pursuing dictatorially the main tenor of his discourse, he not merely enjoyed, he actually invited, the interruptions by which his speech was dislocated. So buoyantly does he enjoy being, at the age of seventy, the Rupert of debate that, instead of ignoring some murmured commentary on the part of his opponents, he drags these whispered words on to the floor of the House and dashes after them all spaniel-like into the bracken. The result is exhilarating and in a way effective, but it does not provide either the House or the country with that consecutive and reasoned exposition which in moments of deep perpleaity they require. It may well have been that Mr. Churchill had decided to leave it to Mr. Eden, when wind- ing up, to provide the factual narrative of events which was above all desired ; and this may have been a wise decision. Certain it is that never in his whole career has Mr. Eden (who is not a natural orator) spoken with greater clarity or Conviction; and no rhetorical triumphs could moie effectively have mitigated the anxiety of those present than the frank and lucid narrative which he provided of these extremely dangerous events. It was perhaps the most useful speech that he has ever made.