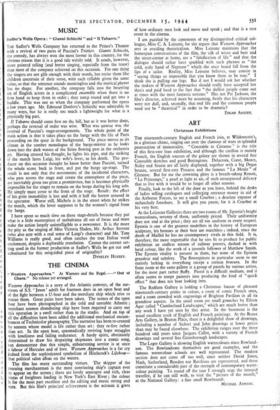 " Western Approaches." At Warners and the Regal.—,, Out of Chaos." No release yet arranged.

Western Approaches is a story of the Atlantic convoys, of the sur- vivors of S.S. 'Jason' adrift for fourteen days in an open boat and of the fight between a U-boat and the merchant ship which tries to rescue them. Great pains have been taken. The scenes of the open boat have been photographed in the cold and unstable Atlantic ; merchant seamen abandoning ship have been required to carry out this operation in a swell rather than in the studio. And on top of all the difficulties have been added the additional mechanical encum- brances of Technicolor photography. The narrative has been re-created by seamen whose model is life rather than art: they re-live rather than act. In the open boat, spasmodically reviving hope struggles with loneliness and failing endurance. A hardy spirit, obstinately determined to draw his despairing shipmates into a comic song, can demonstrate that this simple, enheartening service is at once a labour of Hercules and of love. Western Approaches is a far cry Indeed from the sophisticated symbolism of Hitchcock's Lif eboat- that political salon afloat on the waters.

The film has many outstanding virtues. The skipper of the rescuing merchanunan is the most convincing ship's captain ever to appear on the screen ; there are lovely seascapes and rich, clear vistas of freighters loading in New York's East River ; the colour is for the most part excellent and the editing and music strong and sure. But this film's principal achievement is the account it gives

of how ordinary men look and move and speak ; and that is a rare event in the cinema.

I am puzzled by the comments of my distinguished critical col- league, Miss C. A. Lejeune, for she argues that Western Approaches errs in avoiding theatricalism. Miss Lejeune maintains that the homespun conversations of the film, the talk of wives and beer and the street-corner at home, are a "falsification of life" and that the dialogue should rather have sparkled with such phrases as "the cold, scaly hand of Neptune" which she once heard fall from the lips of a sailor. Reality, Miss Lejeune believes, may consist in "saying things so impossible that you know them to be true." I think she is pulling our legs. But if not I would ask her whether the makers of Western Approaches should really have accepted her thesis and paid heed to the fact that "the dullest people come out at times with the most fantastic notions." Has not Pat Jackson, the film's director, achieved more by assuming, firstly that his characters were not dull, and, secondly, that real life and the common people need not be " theatrical " in order to be dramatic?