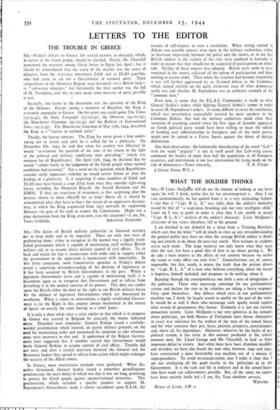 THE TROUBLE IN GREECE

Sta,—Friday's debate on Greece left several matters in obscurity which, in justice to the Greek people, should be clarified. Firstly, Mr. Churchill mentioned the mutinies among Greek forces in Egypt last April ; but it should be remembered that the cause of the mutiny was the arrest of delegates from the resistance movement EAM and its ELAS guerillas, who had come to ask for a Government of national unity. Their sympathisers in the Mountain Brigade were disarmed—welt British help— as "subversive elements," but fortunately the final upshot was the fall of M. Tsouderos, and this in turn made some measure of unity possible at last.

Secondly, one factor in the discontent was the question of the King of the Hellenes. Except among a minority of Royalists, the King is extremely unpopular in Greece. On this point one could quote The Times ('5/9/43), the Daily Telegraph (23/ to/43), the Observer (24/10/43), the Manchester Guardian (29/10/43) and the Bulletin of International News (19/2/43). The Manchester Guardian of May 13th, 1944, described the King as a "barrier to national unity."

Thirdly, the barrier remains. The King has never given a firm under- taking not to return and until he is called for by a plebiscite. On November 8th, 1943, he said that when his country was liberated he would "re-examine the question of the time of his return in the light of the political and military conditions then prevailing" (which was ominous for all Republicans). On April 13th, 1944, he declared that he would "submit freely to the judgement of the Greek people when normal conditions had returned." Not a word on the question which Republicans consider really important—whether he would return before or after the holding of a plebiscite. Is it surprising if some members of EAM and ELAS may have feared a coup d'etat from what they consider right-wing forces, including the Mountain Brigade, the Sacred Battalion and the EDES? If they are suspicious of assurances, is that surprising after the distrust shown to them officiallij for so long? Above all, it should be remembered what they have to fear—the return of an oppressive dictator- ship, in which the King acquiesced from 1935 onwards by supporting Metaxas—in spite of his oath to respect the Constitution. Might not a clear declaration from the King, even now, ease the situation?—! am, Sir,