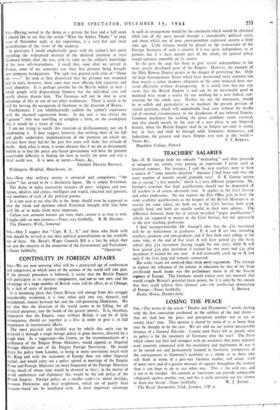 Sla,—We are now entering what will be a protracted age of conferences and congresses, in which most of the nations of the world will take part. If the present procedure is followed, it seems that the British Empire will participate in its separate components, and nor as One unit, and the advantage of a large- number of British votes will be offset, as at Chicago, by a lack of unity of purpose.

It is-becoming plain that Great Britain will emerge from this struggle considerably weakened, at a time when only two ties, dynastic and sentimental, remain between her and the self-governing Dominions. We see also that the direction of the world seems to be falling, for all practical purposes, into the hands of the greater powers. It is, therefore, imperative that the Empire, since without Britain it can be of little consequence, should act together as a bloc in order to give it its full importance in international affairs.

The most practical and fruitful way by which this unity can be achieved is through a single foreign policy in great matters, directed by a single man. As a suggestion—the Crown, on the recommendation of a conference of the Empire Prime Ministers, would appoint as Imperial Foreign Minister one of the Empire Foreign Secretaries. He would direct his policy from London, as being in more convenient touch with the King and with the statesmen of Europe than any other Imperial Capital, and would carry out a policy agreed at meetings of the Empire Prime and Foreign Ministers (or more frequently of the Foreign Ministers alone, Much of whose time would be devoted to this); in the matter of world conferences and diplomacy this would be the sore policy of the British Empire. Foreign policy on a smaller scale--i.e. minor dealings, between Dominions and their neighbours, which are of purely local concern-Sneed not be interfered with. A most important advantage in such an arrangement would be the continuity which would be obtained while one of the units passed through a considerable political crisis, and about which one of your correspondents expressed anxiety a little time ago. Little reliance would be placed on dr transactions of the Foreign Secretary of such a country if it was quite independent, as at present, but if it were merely part of the whole, the general policy would continue smoothly on its course.

In the past the urge has been to give virtual independence to the more greatly developed parts of the Empire. However, the example of the Holy Roman Empire points to the danger of permitting this. Only the large heterogeneous States which have maintained more common ties than merely a rather shadowy allegiance to the same monarch have sur- vived effectively without disintegrating. It is surely time that our airy views that the British Empire is and can be an inestimable good to mankind were made a reality by our working for a new federal con- stitution for the whole area. Neither we, nor the dominions, should be so selfish and particularist as to maintain the present position of virtual partition, which will undoubtedly lead, even without the deadly aid of external circumstances, to the dissolution of our beloved Empire. Common machinery for tackling the peace problems seems essential, and that should merely be the start of a new phase in our Imperial history, when the British Empire shall be an Empire not only in name, but in fact, and shall be through solid humanity, democracy, and federalism, the greatest and truest Empire ever seen in this world.—