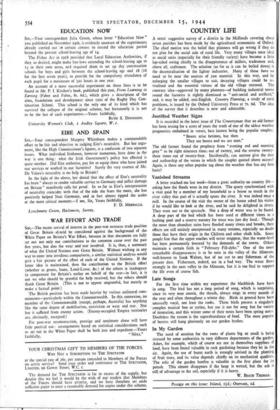 A letter reached me last week—from a great authority on country life— asking how the floods were in my district. The query synchronised with a visit paid by a member of my household to a house so much in the river valley that part of it actually spans the river. It was indeed once a mill. In the course of the visit the owner of the house asked his visitor if he would like to look at the river, and he said he delighted in rivers. They went out to the spectacle. Not a drop of water was to be found. A deep part of the bed which has been used at different times as a bathing pool and a reserve nursery for trout was just dry land.: Though the more than abundant rains have flooded many rivers and brooks, their effects are still entirely unexpressed in many streams, especially no doubt those that have their origin in the Chiltern and other chalk hills. Some people fear that the upper reaches will never reappear, that the water-level has been permanently lowered by the demands of the towns. Others maintain a certain faith in "February Fill-dyke." One of the more remarkable disappearances is to be seen in the valley of the Mimram, well-known to Isaak Walton, but of no use to any fisherman of the present date. Fishermen, indeed, are in a bad way. The water flows strongly in the next valley to the Mimram, but it is too foul to support the life even of coarse fish.