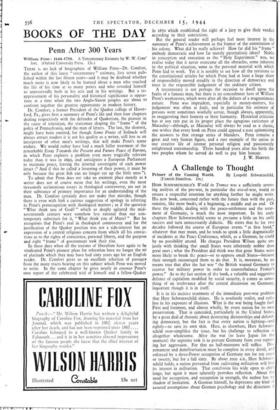 Penn After 300 Years William Penn : 1644-1718. A Tercentenary Estimate by W. W. Con" fort. (Oxford University Press. 12s.) THERE is no lack of biographies of William Penn—Dr. Comfort, the author of this latest " tercentenary " estimate, lists seven pub- lished within the last fifteen years—and it may be doubted whether much more is now likely to be learned about a man who touched the life of his time at so many points and who revealed himself so unreservedly both in his acts and in his writings. But a re- appraisement of his personality and historical significance is oppor- tune at a time when the two Anglo-Saxon peoples are about to confront together the greatest opportunity in modern history.

Dr. Comfort, a former President of the Quaker college of Haver- ford, Pa., gives first a summary of Penn's life and then four chapters dealing respectively with the defender of Quakerism, the pioneer in the cause of toleration, the statesman shaping the " frame " of the polity of Pennsylvania, and the man of letters. The last, the shortest, might have been omitted, for though Some Fruits of Solitude will always attract readers it is not his quality as a writer, still less as an interpreter of other men's writings, that will make Penn's name endure. We would rather have had a much fuller treatment of the remarkable Essay Towards the Present and Future Peace of Europe, in which Penn explores a problem even more tragically relevant today than it was in 1693, and anticipates a European Parliament to maintain peace, leaving the internal sovereignty of each power intact (" And if this be called a lessening of their power, it must be only because the great fish can no longer eat up the little ones To admit that Penn does not take an eminent place merely as a writer does not of course mean that his writings, even the most tiresomely acrimonious essays in theological controversy, are not in their substance of primary importance for an understanding of the man. Dr. Comfort certainly does not make that mistake, though there is even with hid' a curious suggestion of apology in referring to Penn's preoccupation with theological matters ; as if the question "What think you of God?" which so deeply agitated the mid- seventeenth century were somehow less rational than our con- temporary substitute for it, "What think you of Marx?" But he recognises that Penn's zeal in theological controversy and for the justification of the Quaker position was not a side-interest but an expression of a central religious concern from which all his convic- tions as to the rights of conscience, personal liberty, and the purpose and right " frame " of government took their rise.

In these days when all the truisms of liberalism have again to be vindicated Penn's pioneer pleas for toleration have no longer the air of platitude which they may have had sixty years ago for an English reader. Dr. Comfort gives us an excellent selection of passages from the many tracts bearing on this subject which Penn was moved to write. In the same chapter he gives nearly in extenso Penn's own report of the celebrated trial of himself and a fellow-Quaker in 1670 which established the right of a jury to give their verdict according to their convictions.

But the general reader will perhaps feel most interest in the summary of Penn's achievement as the framer of the constitution of his colony. What did he really achieve? How far did his " frame " embody democratic and how far merely paternalistic ideas? Noble in conception and execution as the "Holy Experiment" was, we realise today that it never overcame all the obstacles, some inherent in the political situation, some in the personal 'material with which Penn had to work. Yet it is notable to see how all the revisions to the constitutional articles for which 'Penn had at least a large share of responsibility moved steadily in the direction of democracy and trust in the responsible judgement of the ordinary citizen.

A tercentenary is not perhaps the occasion to dwell upon the faults of a famous man, but there is no concealment here of William Penn's weaknesses, which were after all the defects of a magnanimou, nature. Penn was imprudent, especially in money-matters, his judgement was often at fault, and in particular his estimate of persons went sometimes woefully astray, though always, apparently, in exaggerating their honesty or their humanity. Historical criticism has at any rate put in its proper place the egregious caricature of Macaulay—although, as Macaulay will always be read as a classic, one wishes that every book on Penn could append a note epitomising the answers to that 'strange series of blunders. Penn remains a great and very human figure, and a rare example of the union in one creative life of intense personal religion and passionately enlightened statesmanship. Three hundred years after his birth the two peoples whom he served do well to pay him honour.