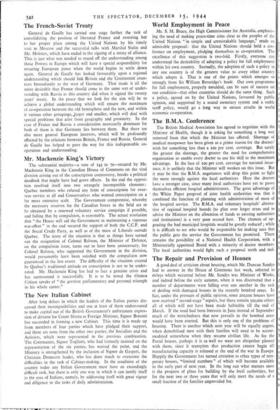 The substantial majority—a vote of 143 to 70—secured by Mr. Mackenzie King in the Canadian House of. Commons on the vital division arising out of the conscription controversy, breaks a political deadlock that might have had grave effects. In the end the opposi- tion resolved itself into two strangely incompatible elements: Quebec members who refused any form of conscription for over- seas service at all and Conservatives who wanted conscription on a far more extensive scale. The Government compromise, whereby the necessary reserves for the Canadian forces in the field are to be obtained by a renewed voluntary service campaign if possible, and failing that by compulsion, is reasonable. The actual resolution that "the House will aid the Government in maintaining a vigorous war-effort" in the end secured the support of both the C.C.F. and the Social Credit Party, as well as of the mass of Liberals outside Quebec. The irony of the situation is that as things have turned out the resignation of Colonel Ralston, the Minister of Defence, on the compulsion issue, turns out to have been unnecessary, for Colonel Ralston, who supported the Government in the division, would presumably have been satisfied with the compulsion now guaranteed in the last resort. The difficulty of the situation created by Quebec's traditional attitude on conscription is not to be under- rated. Mr. Mackenzie King has had to face a genuine crisis and has surmounted it successfully. It is to be noted the Ottawa Citizen speaks of "the greatest parliamentary and personal triumph in his whole career."