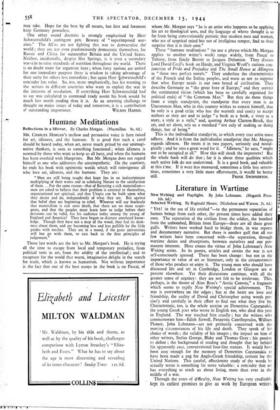 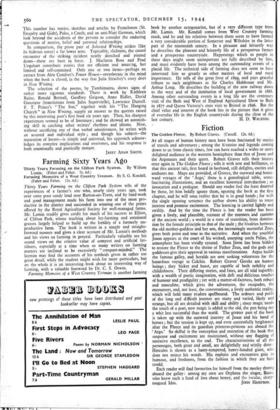 "YES! in the sea of life enisled "—to the permanent separation of human beings from each other, the present times have added their own. The separation of the civilian from the soldier, the bombed from the unbombed, Britain from Europe—there are all these great gulfs. Writers have worked hard to bridge them, in war reports and documentary narrative. But there is another gulf that all too few writers have been concerned with—the separation, through wartime duties and absorptions, between ourselves and our per- manent interests. Here comes the virtue of John Lehmama's New Writing series. In its poems, articles and stories the war is not seff-consciously ignored. There has been change: but not in the importance or value of art or literature, only in the circumstance of those who produce or enjoy it. The young men who should have discussed life and art in Cambridge, London or Glasgow are at present elsewhere. Yet their discussions continue, with all the greater sense of urgency : they are not felt to be irrelevant. This. perhaps, is the theme of Alan Ross's "Arctic Convoy," a fragment which seems to typify New Writing's special achievement. The war is everywhere on the edges ; but at the heart are love and friendship, the reality of David and 'Christopher using words pre- cise!y and carefully in their effort to find out what they live by Characteristic, too, is the whole section on Demetrios Capetanakis. the young Greek poet who wrote in English too, who died this year in England. The war touched him cruelly ; but the writers who commemorate him—Edith Sitwell, Panayotis Canellopoulos, William Plomer, John Lehmann—are not primarily concerned with the moving circumstances of his -life and death. They speak of lo-t choice of words ; the validity of his images ; the impact on hint of other writers, Stefan George, Blake and Thomas Gray ; his passim to define ; the background of reading and _thought that- lay behind his 'apparently easy, conversational four-line stanzas. It would hav2 been easy enough for the memory of Demetrios Capetanakis have been made a peg for Anglo-Greek friendship, cement for th,: United Nations. This careful, affectionate study of the words h. actually wrote is something far more valuable: a rem:nder that art has everything to teach us about living, more than ever in the middle of a war.

Through the years of difficulty, New Writing has very creditabl' kept its earliest promises to give us work by European writer-

This number has stories, sketches and articles by Frenchmen (St. Exupery and Gide), Poles, a Czech, and an anti-Nazi German, which look beyond the accidents of the present to consider the enduring questions of motive, belief and personal relationships.

In comparison, the prose part of Selected Writing strikes (like its hideous cover) a far lower note. Topicality, slickness, the casual encounter of the striking incident neatly sketched and pinned down—these are here in force. J. Maclaren Ross and Fred Urquhart contribute stories that are efficient and amusing, but limited and self-contained. Only one or two items—perhaps an extract from Alex Comfort's Power House—reverberate in the mind when the book is closed, in the way that Julia Strachey's story does in New Writing.

The selection of the poems, by Tambimuttu, shows signs of rather more rigorous standards. There is work by Kathleen Raine, Ronald Bottrall, Geoffrey Grigson, Anne Ridler, David Gascoyne (translations from Jules Supervielle), Lawrence Durrell. F. T. Prince's "The Inn," together with his "The Hanging Church" in New Writing, supply an answer to the queries raised by this interesting poet's first book six years ago. Then, his sharpest experiences seemed to be of literature ; and he showed an astonish- ing skill in catching other writers' rhythms and idioms. Now, without sacrificing any of that verbal sensitiveness, he writes with an assured and individual style ; and though his subject—the separation of lovers—is simple and universal, his approach acknow- ledges its complex implications and overtones, and his response is both emotionally and poetically mature.